Stop me if youve heard this one. I was told by a friend that he had some Steam codes hed be giving away. There was a catch, however. I wouldnt be able to choose which game I received, and I would have to write a review of whatever I got. Maybe youll score GTA V, he said. Maybe youll get Resident Evil 2. So, like one of those dumbasses who buys a $1 lottery ticket at the convenience store, I took the bait. I figured if I got a bad game, it couldnt be that bad, right?

Turns out, it's worse. After I inputted my code into Steam, I was informed that my prize was called Dogcoin. Already, I felt I was in trouble. With a title like that, there was probably very little chance that the developers spoke English. Upon launching the game, I was dropped into the first level immediately  there was no title card or splash screen to speak of, nor was there a main menu of any kind. Shitty graphics and an eye-scorchingly bright blue background assailed my eyes. I tried to maximize the window, but it stayed firmly at a resolution of 1280x720, filling the extra space with a stark white border. I sighed, rolled up my sleeves, and got to the important business of playing Dogcoin. You know, for journalistic purposes.

This game is ostensibly a platformer, where you control a poorly-animated bipedal dog. You use the arrow keys to move left, right or jump (there is no controller support). The object of the game is to reach the portals at the end of the various levels, and you do this by jumping across nondescript wooden crates while avoiding spikes. Any slight touch of these spikes  even their blunt sides  will result in instant death. You are spared the grisly sight of this cute puppy being impaled, at least; the level will simply reset if you die, complete with restarting the games single music track. This can be extremely annoying if you die multiple times in a level, and believe me, you will. A button is available to turn the music off, but the music will turn itself back on every time you die. Eventually I had to mute my system volume altogether to make my playthrough of Dogcoin bearable.

Despite how it sounds, Dogcoin is not actually a difficult game. It just has a particularly frustrating section in level two that took me well over 100 tries to complete. You start this level in a cramped hallway with spikes jutting out of the floor and ceiling, and perfect timing on your jumps is absolutely critical to get through it. However, this is made difficult by the games terrible collision coding. If you touch the ceiling even slightly, there is a random chance that the dogs head will get stuck, and then he will lose all inertia and drop straight down onto the spikes. In other cases, he might lightly brush the empty space occupied the egregiously large hitboxes of the spikes and die that way instead. However, I found it easy to keep trying this section over and over again, as the level resets instantaneously upon death and the spikes are literally a few steps away from the dogs starting point. Propelled by some masochistic determination to see if I could get through it, I threw the dog into the spike-filled gauntlet again and again. Eventually, I managed it. Tapping the jump key very softly seemed to be the best way, though the dogs jump arc had enough variability to it to ensure that there was no reliable way to get through this section aside from dumb luck. 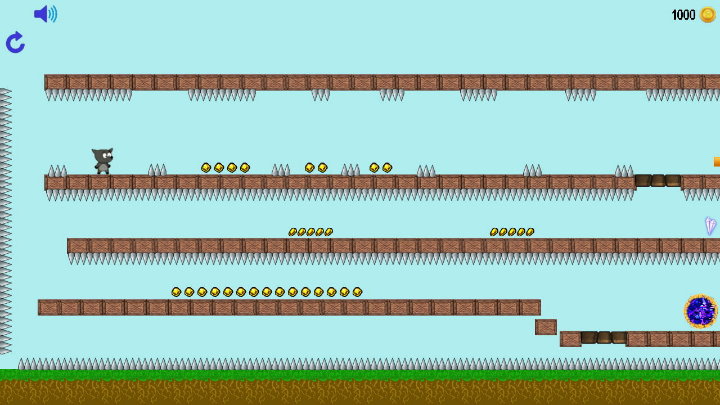 This pooch is screwed.

Once I got past the hell of level two, I found that Dogcoin was actually relatively straightforward, uninteresting and easy. In every level, I jumped across the same damn crates. Occasionally there was a button that made a platform appear or disappear, but otherwise there were no puzzles to speak of. Every level had the same hue of bright blue as a background and the same blue/purple portal at the end, framed by a ring of what I can only assume is vomit.

I suppose I should also explain the coins. Whenever the dog jumps, he throws a coin in a random direction. He also throws a coin if you press up while he is stationary, as he will only jump if he is moving left or right. He starts with 1000 coins, and picking up gold nuggets, crystals and cookies (?) will replenish his supply. However, I could not immediately understand why he had coins or why he was throwing them at all, as there did not appear to be anything to throw them at. I wondered if perhaps this was a high score feature  the more you jump, the less coins you have, and therefore the lower your score. Perhaps the goal was to jump as little as possible. However, it became quickly clear to me that Dogcoin has no high score table of any kind, so that theory was quickly discarded.

Out of curiosity, I decided to expend my entire supply of coins to see what would happen, so I pressed the up key 1000 times like an idiot. I dont know what I was expecting  A fail state, perhaps, but no. Once the counter reached zero, nothing happened. In fact, the dog was still able to throw coins even though he supposedly didn't have any.

I eventually discovered that the coins do have a use, but it took me a while to get there. Around level five or so, there are a couple of enemies resembling Pac-Man ghosts. They move languidly across the ground and spit slow-moving projectiles at you. Dodging their shots is incredibly easy, and lobbing a single coin in their direction will destroy an entire line of them. Again, there are no death animations, they simply disappear. There are maybe five of these ghosts in the entire game, and they are featured in only two levels, so the coins arent actually used throughout the majority of it. This feature  if it can be called that  was obviously never fully implemented. 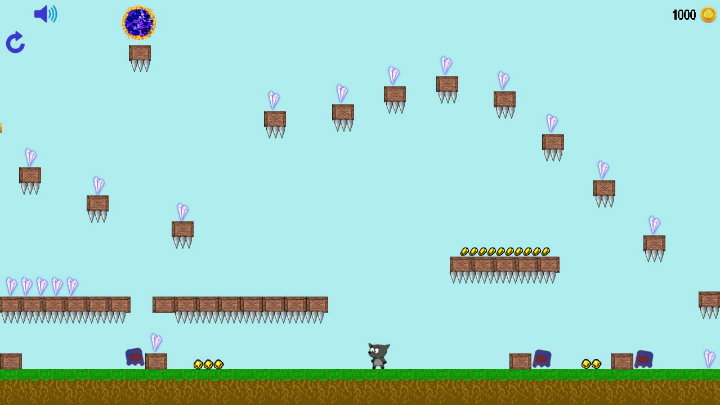 Despite how this looks, all of the pickups in Dogcoin are completely meaningless.

Apart from the half hour I spent getting through the deathtrap of level two, I found that Dogcoin was incredibly short, comprising of only ten levels that could be finished within several minutes each. Upon finishing the game, I was treated to an image of the dog standing on a giant coin against that same backdrop of blue. A button, in English, stated: Replay? Another button in the corner was marked exit. Another button, in Cyrillic, read: выход. Upon clicking this button, it disappeared and moved to another part of the screen. I clicked it again, and it moved again. I did this five or so more times before the game suddenly closed. After poking around on Google Translate, I learned that this word also means exit. Apparently one exit button just isnt enough for Dogcoin, and on that point, I actually agree.

Now that Ive played this game to completion, I find myself in a state of shock that this thing ever made it onto a commercial marketplace. It is the kind of unfinished, glitchy school project that a ten year old could make. The assets and sprites resemble the stock images that might come packed with Gamemaker or a similar studio. Obviously very little effort was expended to make this game and even less effort was made to test or debug it. It is the very definition of shovelware. Some games are so bad theyre good, but Dogcoin doesnt even have that. Its just sad.

I wanted to find out why this thing exists, so I did some research. I tried to check its Steam store page only to find that it has been de-listed. Its nigh-empty Steam community has a total of four posts, one of which confirms that this game does not have trading cards, which means the developers werent even running a trading card scam the way that Digital Homicide was with their games. I found a link to the developers website, which has posts dating all the way back to 2017, but there is no mention of Dogcoin. Perhaps they want this title buried and forgotten, and thats probably for the best.

The fact that this game was made by a Russian developer reminded me of another review I wrote about a $1 puzzle game, however. The exchange rate from USD to rubles is actually quite generous, and I wonder if the developers were simply trying to make as many games as possible with as little effort as possible to net some meagre profits. The other titles advertised on their website certainly seem be in the same vein (poor quality, shovelware). This is my best guess as to why Dogcoin exists and why it was being sold for actual money, but since I could find limited information about it, I may never know the truth. I wont lose any sleep over it, though.

As for that friend who subjected me to this, I hope he got a chuckle from my suffering. Thats about as much joy anybody could ever derive from Dogcoin, either directly or indirectly.

If you enjoyed this Dogcoin review, you're encouraged to discuss it with the author and with other members of the site's community. If you don't already have an HonestGamers account, you can sign up for one in a snap. Thank you for reading!

© 1998-2022 HonestGamers
None of the material contained within this site may be reproduced in any conceivable fashion without permission from the author(s) of said material. This site is not sponsored or endorsed by Nintendo, Sega, Sony, Microsoft, or any other such party. Dogcoin is a registered trademark of its copyright holder. This site makes no claim to Dogcoin, its characters, screenshots, artwork, music, or any intellectual property contained within. Opinions expressed on this site do not necessarily represent the opinion of site staff or sponsors. Staff and freelance reviews are typically written based on time spent with a retail review copy or review key for the game that is provided by its publisher.