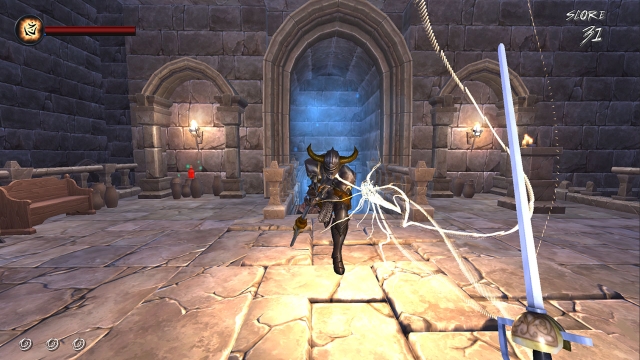 I ended my first few sessions of Neverlast in complete disbelief. All I had done in this first-person action title was wander around a fortress and kill enemies. I kept telling myself there must be more content on offer. I figured I would maybe earn some unlockables after completing the campaign, such as additional weapons, power-ups, stages or characters, but unfortunately that was not the case. After crossing the finish line a couple of times, I realized "wandering around a fortress and killing enemies" is all there is to the experience.

You might suppose there is some context to the aforementioned killing, and you'd be right. You are currently the only human still standing in a besieged stronghold. Everywhere you walk, either a dark knight, a cyclopean creature or a two-headed monster materializes and attempts to murder you. If you want to survive, you'll need to murder them harder and faster. You accomplish this feat by mashing the right trigger or casting a spell until all of the character models before you fall limply to the ground. After that, you move on and fight more beasts who perish similarly, allowing space for even more demons that pop up, and... I think you get the picture.

Your main objective is to locate and destroying three summoning stones, which then thwarts the invasion. Each stone is randomly placed throughout the map, so there's no intuitive or intellectual process involved in finding them. You literally meander about until you stumble upon them, though you should be advised that they love to crop up in places where they would be easily overlooked. Regardless of that tendency, they're not so difficult to find. Once you learn the fort's layout, all you do is walk back and forth between two points until you encounter your targets. 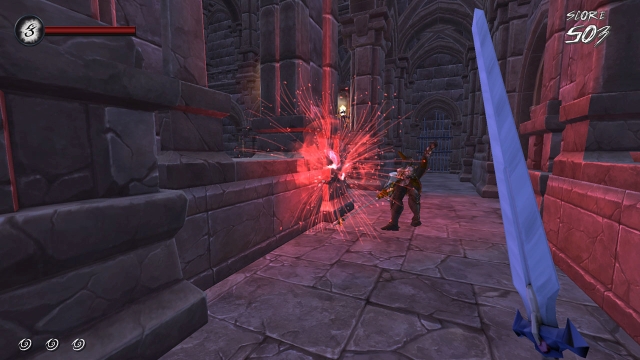 If you're fortunate, all of the stones will appear within close proximity of one another. If you're not so lucky, you'll get stuck to a piece of environment until your opponents bash you to death or you'll fall through the floor before completing your quest. I've had both scenarios occur, where I completed the task in short order in one playthrough, and inexplicably plummeted through the cold stone during the next.

Despite the infrequent glitches, this might sound like a passable waste of time until you consider a few other factors. For one thing, you start with a basic sword and a random offensive spell, and you cannot exchange either of these as you progress. You're stuck with whatever weaponry the game gives you. No, you can't unlock additional blades or modify the protagonist in any way. For all intents and purposes, you're nothing more than a pair of floating arms.

There is no strategy or technique to battle, either; you just repeatedly swing the sword until things expire. As time progresses, foes spawn more frequently and the crowd grows to a battalion. However, you realize just how toothless these monsters are as their army's numbers swell. By running forward and mashing the attack button, you can easily push past even a massive mosh pit of the guys. They also become easier to annihilate with magic when more of them are present, because they crowd the area so much that your otherwise unimpressive explosion offs several of them at a time. But worst of all, none of them can take you in one-on-one combat. By spamming your slices, you prevent them from striking, so single adversaries rarely get a shot in as long as you continuously slice them. 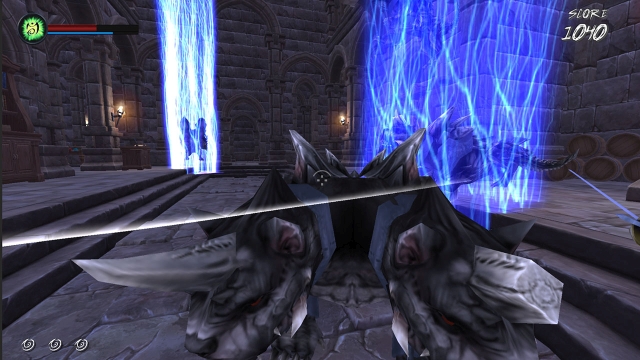 Of course, I'm making combat sound like it's a breeze when actually it can be quite irritating. I say this because you can only move the camera horizontally, and at such a slow speed that it's downright maddening. Sadly, the main menu offers no additional options, so you can't adjust the thumbstick's sensitivity to your liking. Hell, you can't adjust anything to your liking, because there are no additional options listed on the main menu. This game screams "take it or leave it," and frankly I suggest you follow the latter course.

As the opposition's numbers mount, the game also grows a little unstable. You'll occasionally bump into ugly framerate drops that hark back to the original PlayStation. Not that the animation is slick anyway, because movement is regularly choppy and sometimes dizzying. Worse than that, enemies occasionally gather in such huge hordes that a huddled mass of poorly animated character models blocks the camera. It's even funner when you clip through some creatures, spotting the hollow insides of their models as if you're a ghost passing through solid objects.

As for the environment itself, it's rife with all kinds of teasing items and details that belie depth. You see treasure chests everywhere, but you can't open them. You find locked doors all over the place, which seem to imply there are alternate avenues to explore. These barriers are purely cosmetic, though, and lead nowhere. You sometimes spot tables with baubles or potions sitting on them that do nothing. The only items you can interact with are the occasional red vials that restore your hit points. Otherwise, you only catch glimpses of a possibly better game hiding beneath the lackluster one you're currently playing. 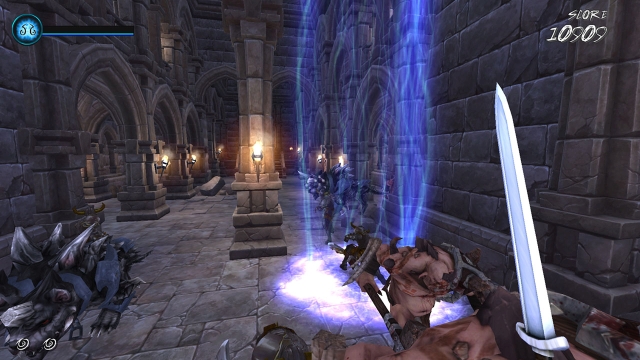 Even the fortress' layout leaves much to be desired. Though it might seem randomly generated at first, it's actually one set schematic. There are a few interior segments that feature some side routes or rooms to check, plus a couple of exterior sections with landings and hidden balconies. None of these explorable locales matter much, though, because it's not as if you can earn earn any loot. They're all just possible candidates for hiding the summoning stones.

Once you've destroyed the third stone, that's it. You're done. Game over. Your prize is a single screen displaying basic stats before you take a trip back to the main menu. You don't even get a credit roll, and the only thing you have to show for all your effort is an exhausted right index finger. You can replay the game or delete it once you're done. Honestly, I would say don't bother downloading in the first place, because Neverlast is so lacking in content, so minimalist and so unstable that it's a waste of time, effort and digital storage space. Even if all you're looking for is a simple, inexpensive, arcade-style distraction, you can easily find vastly superior products on various platforms, especially on Switch.

If you enjoyed this Neverlast review, you're encouraged to discuss it with the author and with other members of the site's community. If you don't already have an HonestGamers account, you can sign up for one in a snap. Thank you for reading!

© 1998 - 2022 HonestGamers
None of the material contained within this site may be reproduced in any conceivable fashion without permission from the author(s) of said material. This site is not sponsored or endorsed by Nintendo, Sega, Sony, Microsoft, or any other such party. Neverlast is a registered trademark of its copyright holder. This site makes no claim to Neverlast, its characters, screenshots, artwork, music, or any intellectual property contained within. Opinions expressed on this site do not necessarily represent the opinion of site staff or sponsors. Staff and freelance reviews are typically written based on time spent with a retail review copy or review key for the game that is provided by its publisher.