Crazy Road is yet another game that has been removed from Steam. Developer Sovkey put out 10 games in 2018 (all between March and May), and 5 of those games even received Mac ports. I couldn't find any of these games on Steam. I did a little digging, and it turns out that Sovkey's games were basically all asset flips and most of the games shipped on Steam without a working executable. For the record, I had no problems running this game.

The premise of Crazy Road is simple - you take control of a car on what looks like four two lane roads. Cars will drive down the screen in any of these eight lanes, while you drive against traffic. If you hit another car, it's over - it's back to the start of the level. There are also crates on the road for some reason. These don't move so they are easier to avoid, but you can generally take a couple of hits before your car catches fire.

The goal of Crazy Road is to collect coins that appear on the road. Each coin is worth 100 points (dollars?) and each level requires you to collect a certain amount. It's not an easy game, but it never feels impossible. Each level has the same layout of coins and crates and cars, so you can eventually learn the patterns and progress, if you can be bothered. The car is a pain to control - you press up to accelerate, left and right to steer, and down to reverse. If you're not already lined up to take a coin, it'll be too late to drive over it once you see it. Your car basically handles like a boat. There is a reason for this. 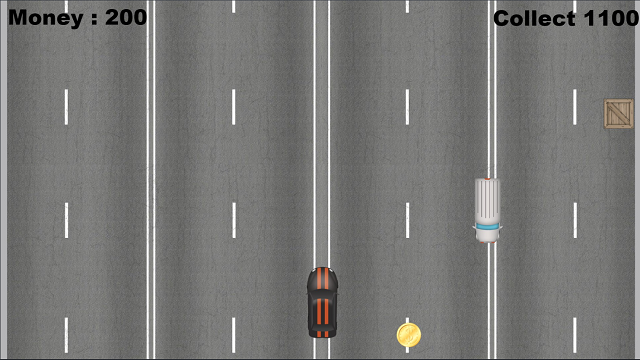 It's an asset flip. I foreshadowed this revelation in my introduction. I believe there is a game that plays almost identically to this one, except that you control a boat that's trying to pick up coins and avoid crates and other boats.

But despite all this, what surprised me most about Crazy Road is that it actually has a base level of competence about it. It's by no means a good game, or even a fun game, but the fundamentals are there. For instance, there is a sense of progression. Your progress is saved when you close the game and reopen it. I'm not sure why I was surprised by this - most games have some sort of save function.

The visuals, while simplistic, are consistent. There's some variety to the cars that will come at you - sports cars, vans, police, etc. When you reverse, you leave skidmarks on the road. The music is annoying, but no more annoying than a lot of crap other people listen to at high volume when they drive with their windows down. My only complaint is that there is only one music track. Not my jam.

Crazy Road feels like the sort of game you could have some fun with if it were based in your browser and you wanted to kill some time at work or school. It definitely does not feel like it's worth 99 cents, which was the original Steam price. You'll get bored of it pretty quickly. The game sets out to do one thing, and it does it competently, even if it was probably stolen. It's just a shame that there's you won't play this for more than 10 minutes.

If you enjoyed this Crazy Road review, you're encouraged to discuss it with the author and with other members of the site's community. If you don't already have an HonestGamers account, you can sign up for one in a snap. Thank you for reading!

© 1998 - 2023 HonestGamers
None of the material contained within this site may be reproduced in any conceivable fashion without permission from the author(s) of said material. This site is not sponsored or endorsed by Nintendo, Sega, Sony, Microsoft, or any other such party. Crazy Road is a registered trademark of its copyright holder. This site makes no claim to Crazy Road, its characters, screenshots, artwork, music, or any intellectual property contained within. Opinions expressed on this site do not necessarily represent the opinion of site staff or sponsors. Staff and freelance reviews are typically written based on time spent with a retail review copy or review key for the game that is provided by its publisher.