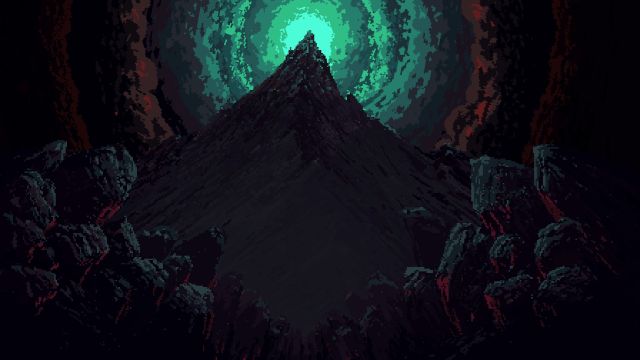 To ensure a quality experience, hard games have to do more than merely prove difficult. Get this: they have to entertain, too. Weird, right? Typically, titles of this nature present their tough situations in a way that seems doable, but which constantly trips you up on your way to the goal. And yet, even in defeat, you still have a little fun to go with your frustrations. Sometimes it's because the game in question is fast-paced enough that it's addictive, or so exciting or rewarding that it offers a heart-pounding thrill ride even with the stiff challenge factor. Super Meat Boy and Dark Souls come to mind. Because of that dynamic, you want to keep playing. You repeatedly tell yourself, "I can do this," until you finally succeed.

Unfortunately, Demon Peak is a different story. This title places you in a cave system overrun by demons, where you must ascend to the top of a mountain and overcome their lord. You explore the world Metroid-style, where new abilities and stat upgrades lie in hidden corners. Over time, you grow from a standard knight to one who can punch through ceilings and floors, double-jump and throw phantasmal spears that also act as platforms. In doing so, you gain access to previously unexplored regions of the map.

None of those qualities stand out, though, because they're all standard genre fare. So this one loads you up with a stiff challenge factor to make up for its lack of innovation, pitting you against hordes of powerful monsters with very few save points to serve as respite. Each creature is a damage sponge, too, absorbing several slashes at a time before expiring. Meanwhile, your foes are able to cut loose some hard-hitting blows that strip away whole portions of your trifling health. Needless to say, you're going to get your butt kicked a lot in this adventure. 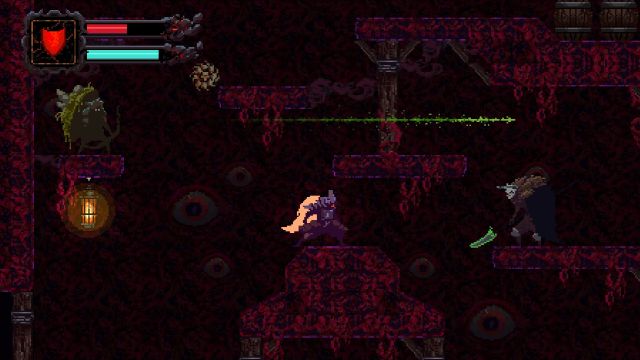 A setup like this goes beyond "fun but frustrating," voyaging more into the realm of "outright infuriating." You might advance through an area, find an item that increases you maximum hit points, secure an ability and throw a switch that permanently opens a previous blocked pathway, only to be overwhelmed by shelled archers, clawed beasts and cursed eyeballs that pulverize you to a pulp. Oh, you didn't reach the save point before you perished? Tough! You'll have to reclaim your prizes and throw that switch yet again.

And yet, you perhaps don't want to give up on this game because it features just enough simple action to seem like it might be of value. Sadly, your mantra throughout this quest is less "I can do this" and more "I can tolerate this."

In order to survive, you often have to avoid combat as if this were a survival-horror experience. Thankfully, many enemies await you in spacious corridors that allow you to leap over them. However, this leaves you to question why the game features such stiff combat in the first place. Granted, you can't elude every foe you bump into, but numerous miles of real estate allow you to escape without losing an inch of life, while also leaving your opponents unscathed. Honestly, there isn't much incentive to kill, anyway. This adventure eschews RPG elements, so vanquished monsters don't grant you experience. You do sometimes obtain items or life-restoring red orbs. However, the former of those are rare, and the latter only heal you so much. Neither option makes battle worthwhile unless you're desperate. 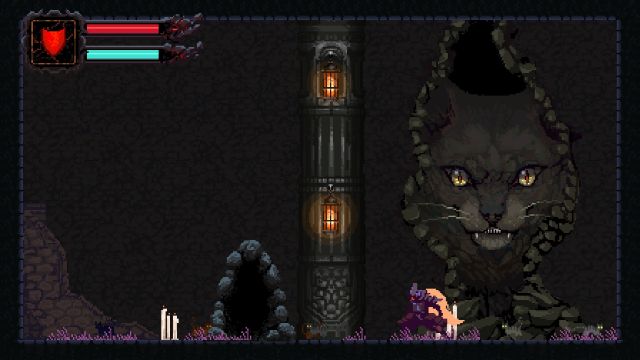 When you do finally stand your ground, you'll find the best strategies involve swooping in for a single blow and retreating to dodge an oncoming attack. As I previously stated, the creatures you face usually take loads of hits to vanquish, so you can expect a single fight to sometimes last much longer than it needs to. In other words, each conflict in Demon Peak ranges from unnecessary to tedious.

Here's some good news: you can improve your damage and defense ratings. The bad news, though? You need to defeat one of the first three bosses (the fourth boss is the final one, as it turns out) to accomplish that. To make matters worse, these guys hit you with most punishing attacks available to any opponent. For instance, during my playthrough, I fought a huge, undead serpent with only a couple of hit point boosts acquired. As a result, he killed me in two hits, which wasn't hard for him to accomplish. The dude didn't have much of a pattern and moved so quickly that he could hit me before I could reasonably react, plus he frequently rained poisoned barbs on me out of nowhere.

Thankfully, the game is structured such that you can earn almost all of the special skills and life and magic boosters before even facing your first boss battle. And yet, obtaining them practically requires you to kill at least one boss, since that's the only way you can withstand the punishment standard enemies dole out during your journey. 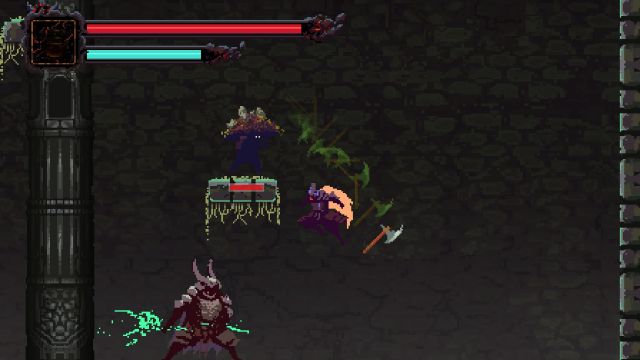 Look, I'm not saying Demon Peak is a bad game, but it doesn't offer much of anything to make its difficulty worthwhile. Yeah, it's got snazzy retro production values with some cool-looking monsters. Hell, even the save points are awesome, as they're massive crevices watched over by giant guardian cats. However, presentation only carries a game so far when its entertainment value hinges mostly on its combat mechanics and exploration.

You know, the very same mechanics that I previously described as unnecessary and/or tedious?

I will say that there's one silver lining to all of this: new game+. You see, this adventure was mostly built to be a speed runner. Think about it: monsters you can easily dodge, spacious corridors, the ability to bypass everything and cut straight to the chase... I tested this theory out, and sure enough, I was able to plow through the campaign a second time in under an hour. Hell, I even had more fun killing the bosses when I was more enabled to do so. Strange how that works out!

However, a game's speed running aspects shouldn't take away from its first playthrough, and that's unfortunately how Demon Peak rolls. It's a stylistically cool platformer trapped in a laborious Metroidvania, one that plays better on subsequent replays. Honestly, though, why not just give us a game that plays well during your first time through it?

If you enjoyed this Demon Peak review, you're encouraged to discuss it with the author and with other members of the site's community. If you don't already have an HonestGamers account, you can sign up for one in a snap. Thank you for reading!

© 1998-2021 HonestGamers
None of the material contained within this site may be reproduced in any conceivable fashion without permission from the author(s) of said material. This site is not sponsored or endorsed by Nintendo, Sega, Sony, Microsoft, or any other such party. Demon Peak is a registered trademark of its copyright holder. This site makes no claim to Demon Peak, its characters, screenshots, artwork, music, or any intellectual property contained within. Opinions expressed on this site do not necessarily represent the opinion of site staff or sponsors. Staff and freelance reviews are typically written based on time spent with a retail review copy or review key for the game that is provided by its publisher.