"Okay," I said, returning to the chat room I had left only a few minutes prior. "Who's the clown that recommended Fantasy Zone?"

It was an AOL chat room, which myself and a number of online friends used to frequent back in the days when people did such things, and the recent topic of discussion had been great shooters. Someone told me to try Fantasy Zone, and so I did. Then I came back convinced I had been the victim of a prank. The game, I thought, was not particularly enjoyable and also it looked like it was made for kids.

Over the ensuing years, I have come to realize I was the clown in that situation. I wanted a straightforward horizontal shooter, and when I played Fantasy Zone, I was defeated by my expectations. It felt nothing like Gradius or R-Type or the Darius games in any ways that mattered to me. It more closely resembled Defender, which I never cared for and didn't understand. While the suggestion that I give Sega's classic horizontal shooter a shot wasn't a prank, I clearly wasn't ready for it. 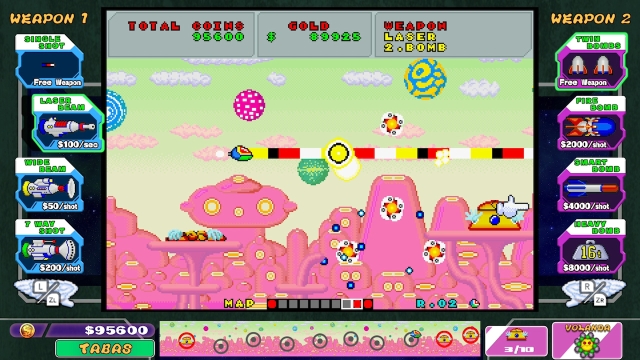 Most of 20 years later, I guess I'm still not ready. But today I can see the game's appeal more easily, appreciate the things it does right and better articulate what I don't love about it, even beyond its failure to fall in line with my outdated expectations. Also, I can recognize where the Sega Ages version makes some smart decisions that work even for a clown like me.

Sega Ages: Fantasy Zone, as its title suggests, is one of the latest entries in a revived line of ports of classic arcade and console games from Sega. Development was handled by the capable team at M2. The core Fantasy Zone game is included, along with some alternate modes and enhancements to make the experience friendlier for both newcomers and for veterans who may have slower reflexes now than they did in their prime.

You fly a tiny little ship through a word of plants and pastels. There are enemy bases scattered around the zone, and they routinely expel aerial resistance that will try either to ram into you or pelt you with shrapnel from a distance. A single hit costs you your ship, along with any upgrades you may have secured, so it's important to pay attention to attacks that may come at any moment and from all sides. Boss battles loom on the horizon. 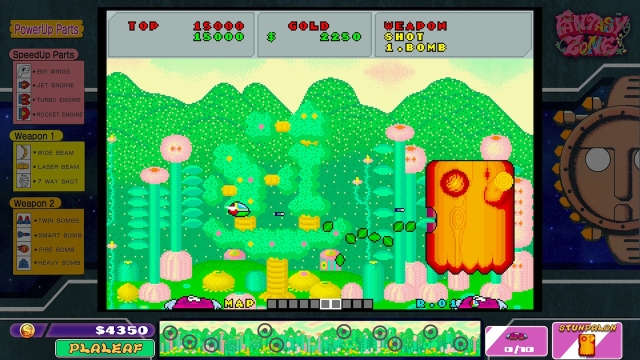 Your ship moves slowly at the start, but that's no big deal. You should be able to weave through the starting resistance and take out a few bases, then snag coins that drop. Periodically, a "Shop" icon flies around the screen, almost like it is a ship itself, and you can brush against it to find options for vital ship enhancements. It's possible to buy an additional ship, or improve your speed or bombs, or purchase a more effective primary weapon. Upon exit, you can configure your setup and return to the action.

After you clear the last base, you'll face one of those bosses I mentioned. Each of these bruisers is distinct and deadly. Even the first round's guardian--a giant stump with a face that fires lethal leaves in your direction--is quite capable of taking out the unwary pilot. Later foes force you to dodge laser barrages, armored tentacles and more, generally while weaving through a field of projectiles that demands careful attention if you're going to survive long enough to mount a successful counterattack. Fantasy Zone is what some call a "cute-em-up," and I'm pretty sure the developers took special delight in making things both as cute and as difficult as they reasonably could so image-conscious boys in arcades would drop more quarters to preserve their pride.

The chief problem with the game, as I see it, is that the upgrade system is unreliable and yet impossible to ignore. As you advance into the later rounds, you need to be able to move quickly and you need firepower that clears the screen efficiently or you won't have even a remote chance of taking out all of the bases and summoning the local head honcho. The skies get so crowded that I can lose a ship, start again and lose a second ship within a half-second, before I even get my bearings. Upgrade costs soar, especially if you rely on the same modifications, so you need to be careful to choose the right gun for the right stage. 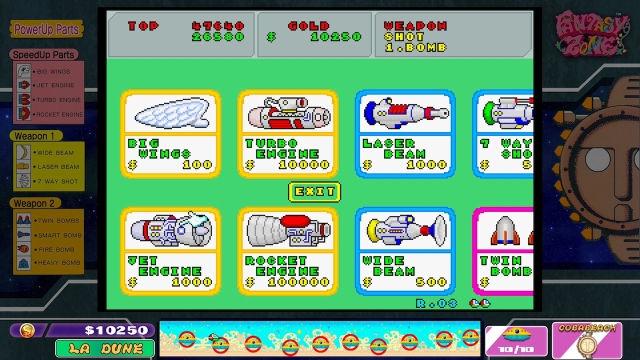 You also need to mind when you duck into a shop--even if you have money enough to make a purchase--because everything but your default pea shooter is considered "special" and comes with a corresponding meter that counts down the moments until it is gone. If you pick up a sweet laser and use it to blast through a bunch of bases and flying squadrons, its effects will probably expire just about the time you have to advance to the more grueling battle beyond. Also, sometimes the shop takes its sweet time appearing, so it's not like you can reliably save up a bunch of money and go find a merchant just ahead of doomsday.

Another issue is that unless you're in a boss battle, where the control setup appropriately changes, you fire left or right depending on where your ship faces. So if you're flying toward the right and suddenly a squad of ships zips toward you and starts firing, you can't just blast them out of your way while dropping back toward the left. You instead turn left and start firing in that direction while leaving your tail exposed and not doing anything to clear out the threat at hand. Also, you can't see very far in either direction and you're likely to fly into a bullet or a whole enemy fleet from just out of sight. The mechanics are maddening, especially when they cost you a precious upgrade you just spent the last minute saving toward. 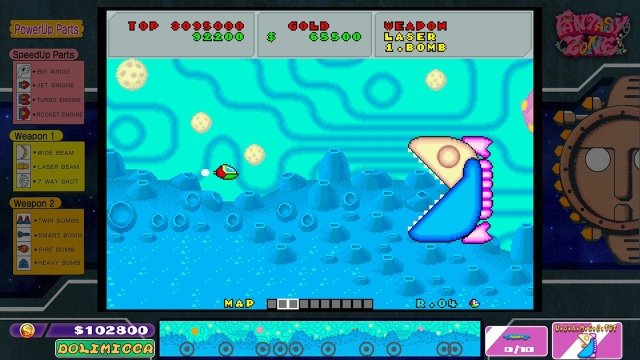 Eventually, persistent players will get the hang of things. Even I did. But Fantasy Zone itself isn't nearly as welcoming to newcomers as its charming presentation suggests it will be. That's why it's a good thing there are some enhancements. One smart change is the "Coin Stock" option, which lets you add any loot you lose at the end of your run to a total pile of wealth. You can opt to bring some of that loot with you the next time you play and maybe get things off to a good start. Of course, because of the way the game is designed, even that generous accommodation is no substitute for skill.

Two new modes of play prove more meaningful. In "Time Trial," your job is to clear the whole campaign as quickly as you can. Enemies seem to fall more quickly than normal, but they're still capable of mounting serious resistance. I can't quite reach the end of the game, because I get stuck at the end of Round 6, but it's a nice way to explore later challenges, provided you're patient and not a total scrub when it comes to shooters. Another option, "Upa-Upa Mode," lets you bank coins during a round. You can press the shoulder buttons to cycle through all weapon types at any time. As long as you have coins to pay, you may use any attack you wish. So obviously, you need to be strategic about when you pull out the big guns.

Sega Ages: Fantasy Zone adds interesting twists to a classic arcade shooter a lot of today's gamers may never have experienced. It's a worthwhile addition to your library if you love seeing the genre's roots exposed. However, the limited viewing perspective is difficult to tolerate in this day and age, and the punishing weapon upgrade system takes away the player's agency when it's needed most. The result is a white-knuckle shooter definitely at odds with its welcoming visual design. It's entertaining, but don't expect a day at the circus.

If you enjoyed this Sega Ages: Fantasy Zone review, you're encouraged to discuss it with the author and with other members of the site's community. If you don't already have an HonestGamers account, you can sign up for one in a snap. Thank you for reading!

© 1998-2021 HonestGamers
None of the material contained within this site may be reproduced in any conceivable fashion without permission from the author(s) of said material. This site is not sponsored or endorsed by Nintendo, Sega, Sony, Microsoft, or any other such party. Sega Ages: Fantasy Zone is a registered trademark of its copyright holder. This site makes no claim to Sega Ages: Fantasy Zone, its characters, screenshots, artwork, music, or any intellectual property contained within. Opinions expressed on this site do not necessarily represent the opinion of site staff or sponsors. Staff and freelance reviews are typically written based on time spent with a retail review copy or review key for the game that is provided by its publisher.