Reviewing Bonk 3: Bonk's Big Adventure is a bit tricky, if only because it breaks so little new ground. The second installment was still quite fresh in my mind when I played this one, which made the similarities even more striking. Both games are good platformers that don't quite reach the mark of greatness. Both feature the titular caveman using his head to bash through the ill-tempered King Drool III's followers. Most of the same power-ups are sprinkled through a number of levels that tend also to cover the same ground: slippery ice levels, surprisingly modern cities and other locations that often seem to have been designed to evoke feelings of deja vu among those who have played previous games in the series.

Remember back in the NES days, when Super Mario Bros. 2 was released? Before Nintendo decided to rework another game to include Mario and a few friends, the original version was essentially just a more difficult version of the first Super Mario, utilizing the same graphical style and general level designs, but ramping things up to provide a sterner challenge to players who felt the Mushroom Kingdom was a little too safe. Bonk 3 is kind of like that, but without the boost in difficulty. You could play it immediately after Bonk's Revenge and it'd feel less like an original game and more like the second half of a lengthy romp.

The main addition here is a pair of power-ups that change Bonk's size. One turns him into a super-sized man-monster capable of dwarfing nearly everything else on the screen. The other shrinks him down to a size capable of wiggling into even the most narrow of paths. Building upon that, several levels in this game are more expansive than the ones presented in prior games, offering several side paths containing various goodies that can only be accessed by shrinking. This was an improvement in my eyes, since there were a couple times when I had to put in a bit of thought to figure out just how to progress from where I was to where I needed to be in order to clear a stage. 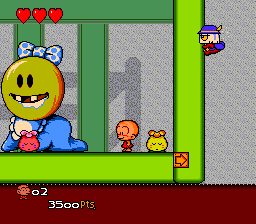 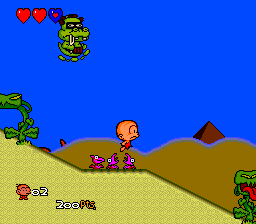 Another new feature comes in the form of large-mouthed fish you'll find when traveling underwater. Get too close to their lips and you'll be swallowed, leading to a mini-level you must traverse to regain your freedom. These places are a mixed bag. On one hand, they're short and don't really add much of anything; on the other, you often can pick up a couple hearts in the bellies of these beasts. If you're on death's door, getting gobbled could lead to Bonk lasting a while longer.

Other changes are more cosmetic. Flowers still take Bonk to mini-games, and there are tons of smiley-face icons to collect. Instead of taking a train to the next world after beating a boss and getting rewarded based on how many of those icons you picked up, though, you simply spend some of them to participate in as many mini-games as you can (or want to). Pick simple ones loaded with life-restoring goodies and you'll start the next world with full health. Or be stupid and pick the ones that aren't littered with rewards and realize you wasted currency on a failed attempt to get some sort of reward; it's your choice!

For the most part, this game could be described as "(barely) different, but equal" to the second Bonk game, but it took a step backwards with regards to boss fights (which says something, considering that I thought the bosses were a weak point in Bonk's Revenge). I guess there's only so much you can do with bosses when your hero's main skill is the ability to jump and slam his head. All the good ideas about how to use that setup apparently had been expended by the time this game came around. I found myself in a situation where most of these battles didn't really resonate with me in any way, except that they left me annoyed about the interruption in my exploration of the more enjoyable levels. I also didn't like that I suddenly had to be precise with my jumping attacks to avoid being the one to take damage. Often, the saving grace for me was the fact that losing lives doesn't force you to start over; you're able to re-enter the fray with the boss every bit as damaged as it was when you lost that life. At least that let me brute force my way through those tiresome battles without stalling my progress.

While this game is roughly as good as Bonk's Revenge, I did feel a sense of diminishing returns as I worked my way through it. I enjoyed and appreciated what I was doing, but it also was pretty easy for me to understand why this was the final TG-16 game in the series before it faded into obscurity with a pair of Super Nintendo games, one of which wasn't even ported to American soil. When you compare the Bonk games to the top platformers on rival systems, it comes up short to each in one key factor.

The Genesis had Sonic the Hedgehog, for instance. Both series are similar in that you're essentially doing the same stuff from game to game, with only minor alterations. However, Sonic had a really cool gimmick to stand out from the pack: the titular hedgehog's ability to run really fast. Bonk is a capable lad, but his ability to smack baddies with his head is simply a variation on Mario's stomp. His games are fun to play, but they don't really offer anything you can't get elsewhere. 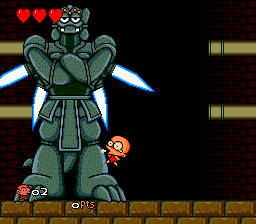 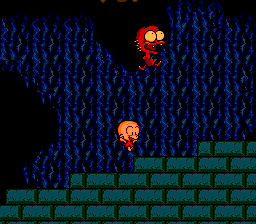 Meanwhile, Nintendo's systems had the Super Mario Bros. games, where things could change greatly from one entry to the next. The third installment was such an improvement over the original's formula that it's a disservice to even compare the two. From there, future games took on aspects of those early games -- with some featuring shorter, timed levels and others having longer, clock-free ones with the focus more on exploration and items -- but with enough original features that it's noteworthy when a game such as New Super Mario Bros. 2 earns criticism for not being different enough from its predecessors.

The Bonk series just does its own thing. The first game was good. The second was also. So was the third. But none of them reached true greatness and, due to their similarities, players will likely start longing for less of the same. Taken on its own, Bonk's Big Adventure is a fun game with bright, colorful graphics and a number of decent-sized levels, with secrets to find in out-of-the-way corners. That's the sort of experience that's easy to recommend to anyone who fondly remembers classic platformers and wants to try some of the ones that may have previously fallen through the cracks.

But after so recently playing another game in the series, it's hard to muster much enthusiasm for this one. If you liked Bonk's Revenge, you'll like this one. And if you didn't, you might as well keep far away. Bonk's Big Adventure might be enjoyable to play, but it's too derivative of its predecessors without adding enough to the formula for me to praise it as the definitive TG-16 Bonk experience it might have been. It makes me appreciate why its series was popular for a whilebut also helps me understand why said series' relevance was nearing its end.

If you enjoyed this Bonk 3: Bonk's Big Adventure review, you're encouraged to discuss it with the author and with other members of the site's community. If you don't already have an HonestGamers account, you can sign up for one in a snap. Thank you for reading!

© 1998-2021 HonestGamers
None of the material contained within this site may be reproduced in any conceivable fashion without permission from the author(s) of said material. This site is not sponsored or endorsed by Nintendo, Sega, Sony, Microsoft, or any other such party. Bonk 3: Bonk's Big Adventure is a registered trademark of its copyright holder. This site makes no claim to Bonk 3: Bonk's Big Adventure, its characters, screenshots, artwork, music, or any intellectual property contained within. Opinions expressed on this site do not necessarily represent the opinion of site staff or sponsors. Staff and freelance reviews are typically written based on time spent with a retail review copy or review key for the game that is provided by its publisher.