Capcom vs. SNK was the first in the crossover series between the two game company fighting game giants, attempting to determine who of their roster of fighters was the best. It was an ambitious premise, and the thought of Terry Bogard trading punches with Ryu was indeed a wishful one. For the most part, the shot series did well in said premise, even though certain elements from it were a bit awkward in terms of gameplay, such as that Ratio System and the "Groove Points," which to this day I am yet to figure how they work. 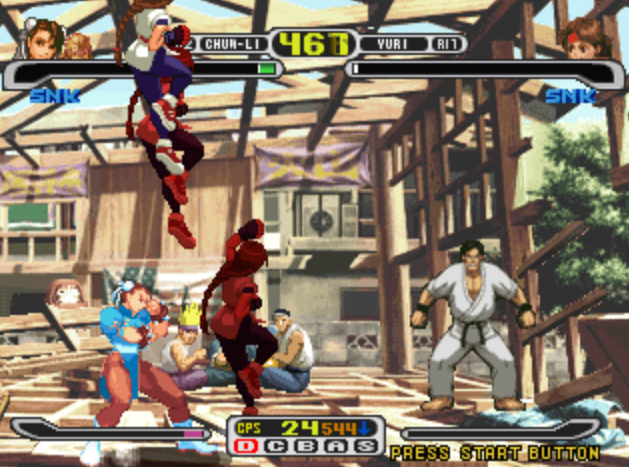 The game was ported as Capcom vs. SNK Pro for the PlayStation, which was released in the US couple years later after the Dreamcast port. This version adds Joe Higashi and Dan Hibiki to the roster, both which were used in every ending on the original game. Besides this, there isn't much difference between both games save that the PSX version suffers from those insufferable download times between each match, and some color loss from characters as well as those awesome stage intros being scrapped. The game offers to cut through the scenes between matches to cut down loading times, at the cost of being unable to select which character goes first in the next match. 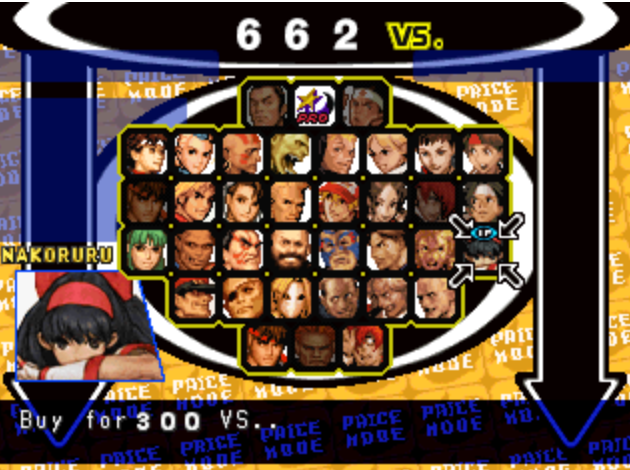 The gameplay is pretty balanced to meet the rhythm each franchise has for their characters. While the entire cast from SNK fighting games have been drawn from scratch, some characters from the Capcom side use their Street Fighter Alpha sprites, when some others have been also redrawn making their sprites entirely new for this game. This causes a bit of awkwardness when seeing SFA Sagat fighting a whole new version of Ryu among others.

The very first thing the game offers after pressing start is the Groove select screen. These choices affect the gameplay that you will be using during your session. The Capcom groove will give you an Alpha level style meter for your super moves while the SNK one will mimic that of old King of Fighter games where you hold down buttons to build it up. While you have to build up sections on the Alpha meter, the SNK version allows you to do unlimited weak versions of your super moves when your health bar flashes red when your character is about to be defeated. The artwork for each character also changes after selecting which Groove you will be using. 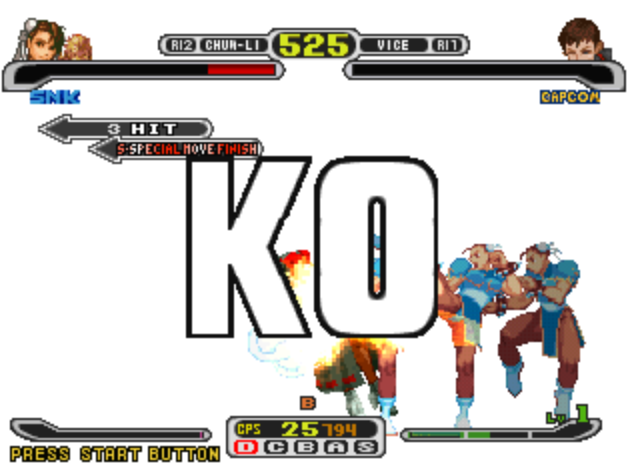 The roster of characters is quite varied, and you can choose between having two or more characters on your team, or choose a lone, powerful character without having aid from any sort of companion. The Ratio system comes into play here, distributed to each character when making your choice. One thing to remember is that when you make your choice, it must amount to a total of 4, with no excuses about it. You can have a character of a ration of 3 and select a Ratio 1 character to form said team, or have 4 Ratio 1 characters to have in said team. Be forewarned however, the fact that you have more characters does not mean you will have a better chance of winning, especially when Ratio 1 characters face off against a Ratio 2 or above.

While the game offers points raking up for a high score, it also features groove points, which either go up or down depending on your matches. One of the points about this system determines whenever you can challenge a hidden opponent during gameplay, such as Akuma who will fight you instead of the last boss at the end of the game. It is quite tricky to perform well in getting such points, if not a huge headache just to fight an unlockable character overall.

An improvement over the Dreamcast version is that you can earn more points after beating the game, and use them to unlock features on its "shop" mode. These points are separate from the Groove Points mind you, and you are awarded with such whenever you end the game either by beating it or getting a game over. Beating the game awards you with far more points that being defeated halfway through. You can use these points to unlock stages and characters, as well as EX Characters versions of existing ones. The EX Characters are simply the same character with a different move set than the original, while unlockable ones are true characters who range from Evil Ryu to Nakururu and so on. These characters are quite cheap to acquire, so you will have the complete roster in no time with the generous amount received from playing the game. The sound does indeed suffers a bit, but the track is seemingly nice still.

This is no doubt an inferior port from the Dreamcast version, and you would just get this game if either you are a completionist or do not play any other ports of it. It is quite average as is, although you still get a kick from it whenever you play it. My recommendation would be that if you own the Dreamcast version then you are not missing much on this one.

If you enjoyed this Capcom vs. SNK Pro review, you're encouraged to discuss it with the author and with other members of the site's community. If you don't already have an HonestGamers account, you can sign up for one in a snap. Thank you for reading!

© 1998-2021 HonestGamers
None of the material contained within this site may be reproduced in any conceivable fashion without permission from the author(s) of said material. This site is not sponsored or endorsed by Nintendo, Sega, Sony, Microsoft, or any other such party. Capcom vs. SNK Pro is a registered trademark of its copyright holder. This site makes no claim to Capcom vs. SNK Pro, its characters, screenshots, artwork, music, or any intellectual property contained within. Opinions expressed on this site do not necessarily represent the opinion of site staff or sponsors. Staff and freelance reviews are typically written based on time spent with a retail review copy or review key for the game that is provided by its publisher.