Once upon a time in the long-ago year of 2005, God of War came out for the PlayStation 2 and was considered a revelation. The sort of game that got so many perfect scores attached to it that it ranks as one of the best-reviewed titles of its era, acquiring all sorts of praise and recommendations in the process.

Is God of War a fun game? No doubt. Is it some elite "Game of the Year" monolith? Not unless 2005 was a fairly crappy year in gaming, which a bit of research says was definitely not the case. I enjoyed a good deal of my time with it, but it never really hooked me to that "this game is my new addiction" level. Not in 2005 when I was introduced to it, not in the ensuing years when I twice tried and failed to get through it and most definitely not in 2019 when I finally succeeded in that endeavor.

In a way, I'm not all that shocked that this game got near-universal love. It does include some stuff that really made it stand out in comparison to the average PS2 title. God of War is one of those games that stretches the capabilities of a system so far that one could easily envision it fitting in with the next era of consoles with only a minor face-lift. Characters are large and well-animated and the backgrounds often are stunning in an otherworldly sort of way, with all the large statues, massive temples and other attractions to find in and around the besieged city of Athens. And the being doing said besieging is a gigantic god who appears so overwhelmingly powerful in his early-game appearances that one could be pardoned for wondering how overcoming him could even be conceivable.

Also, this game didn't scrimp on the brutality, as Sony seemingly was determined to create a new template for adult themes in games. For any of us who grew up playing games on the 8- and 16-bit systems, this is a positive, as we remember how strongly Nintendo of America felt about their games being family-friendly. They'd go to great lengths to remove religious references, while trying to mask death with any number of vague euphemisms. In God of War, protagonist Kratos is a brooding, scowling anti-hero only deserving of the "hero" part due to how adversary Ares amazingly is even worse. In the game's opening level, after Kratos brutally slaughters a fearsome Hydra, he'll rip a necessary key away from the helpless captain of the ship attacked by said Hydra before sending him to his demise and then retire to a cabin to enjoy the company of a pair of virtually naked women. Enemies can be dispatched via brutal animations and neutral (or allied) NPCs often fare no better. In one battle, fleeing innocents can be butchered to restore his life. Later on, he'll remorselessly sacrifice a pleading prisoner in order to open a door. He is the embodiment of bloodlust and the camera's unflinching eye is there to witness it all.

The final ingredient in God of War's success simply was amazing publicity. If you've read and written reviews for a couple decades, give or take, it does get hard to notice that certain games designed by certain companies seemingly get set up for success, with reviewers serving as de facto PR honks. I've read a lot of stuff written about this game and the issues I have with it seem to be downplayed, if they even are mentioned. It's not the first game I've seen get this treatment and it won't be the last, but it's hard to not notice when my opinion diverges so much from the norm, especially considering how regularly my tastes at least somewhat line up with the general consensus. 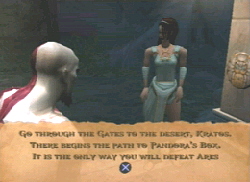 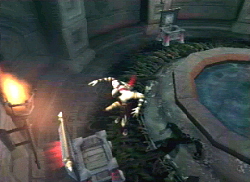 While good, God of War shoots itself in the foot too many times for me to find it consistently enjoyable. The combat system is simple and fun, with one button delivering light attacks and another allowing stronger ones. Both kinds of attacks can be mixed together, along with jumps and dodges, to create various combo attacks. Kratos also will gain a number of sub-weapons that can be used at the expense of magic points to provide extra diversity in combat and every weapon, primary and secondary, can be leveled up to become more powerful and unlock new combos.

However, that battling can get repetitive due to a very limited bestiary. You'll fight a ton of generic soldiers whose only defining characteristic is that they do evolve to be more powerful and durable as the game progresses. As soon as you reach the city of Athens, you'll encounter the larger and more imposing Minotaurs, which will find their way into fights throughout the duration of the game. Every other monster, whether it be the massive Cyclops, slithering Gorgon or annoying Harpy, appears more sparingly. You'll fight a few of them in a particular area and then go an hour or two without seeing another, while killing generic soldiers by the platoon in the interim. Hell, a couple of them such as Cerberuses and Centaurs aren't even introduced until you're well over halfway through and still are rarely seen after their debut.

Over the early stages of the game, this didn't really bother me. Athens is a great place to chill with Kratos, as you'll constantly be moving forward, while dispatching enemies without too much grief. But as the game progresses from Athens to the massive Pandora's Temple, things start to crumble.

With a tiny bestiary, God of War implemented other ways to provide challenge. At times, Kratos will be expected to travel along narrow rafters suspended high in the air -- situations in which the game's fixed camera angles can easily be detrimental to one's success. Especially when, late in the game, you'll be traversing those narrow rafters while having to regularly jump over spinning blades eager to send you plummeting to an ignoble demise. 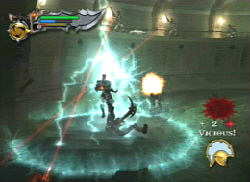 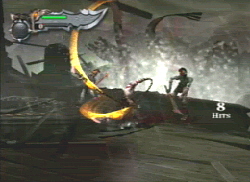 And when you get to Pandora's Temple, the game starts throwing in areas where you have to do something quickly or be instantly killed. First, there is the Trial of Poseidon, where you have to overcome sluggish swimming controls to get through two different "move quick or die" areas -- the first requiring speed and the second necessitating both speed and precision. Get through those and, as you're closing in on the temple's big prize, you'll be dumped into a hellish room where you have to pull a lever to start a timer and then drag or kick a block into another chamber of this room, leap onto it and perform an absolutely PERFECT double-jump onto a ledge before the timer expires and instant-death spikes explode from the ground. It took slightly over an hour of repeated attempts before I was able to finally succeed in this because you have scarcely any margin for error time-wise and absolutely none in that double-jump.

That ordeal made a segment where I had to cross spinning, blade-infested logs over lava seem like a walk in the park on a pleasant afternoon. And then I had to climb up some of those spinning, blade-infested logs. On the bright side, getting hit with a blade only resulted in losing a bit of life, while sending me to the bottom to start the climb anew. On the negative side, when you have a lengthy climb and you've fallen a dozen or so times, there really is no "bright side". Oh yeah, the final boss fight is divided into three separate fights, with the final one forcing you to dump the weapon you played with FOR THE ENTIRE DAMN GAME in order to equip a massive sword that controls differently. That's cool, guys. Why would I want to keep using those nimble chains that I've been effortlessly stringing combos with, when I can abruptly switch over to a clumsy-feeling weapon in order to fight the climactic battle blocking me from finishing this game? If there's a saving grace to any of this stuff, it's that checkpoints are frequent enough that I'd quickly be able to try again. And again. Andyou get the point.

When I was playing God of War, I'd go through periods where I was having a great time fighting monsters and progressing through stages. And then I'd hit one of those aforementioned challenges (or a handful of others) and everything would change. Instead of having fun, I'd enter a frustrating stretch where I hated what I was doing, but would grimly force myself to endure things in what I'd describe as a stoic mannerif stoicism had any room for screamed profanities and thrown controllers in it. And I'd ponder whether those reviewers giving this game a perfect score had completely played through it before deciding to effusively praise it, because it is pretty awesome in its early stages before regularly becoming frustrating and even cheap down the stretch.

And my feelings can't even be described as the result of playing a great game years after its peak popularity. I first played God of War shortly after its release, played up to the desert separating Athens from Pandora's Temple and liked it enough to buy it. At which point, I made it to that temple and things just fizzled there. A few years later, I gave it another shot and, once again, lost interest when I got to the temple. This time, I made it all the way through, but found that, once again, the farther I got into the game, the less I was enjoying it.

Which isn't to say I didn't have a fair amount of fun. It looks and sounds great and lives via the "rule of cool" as you develop Kratos to become powerful enough to challenge a member of the Greek pantheon. No, there's a lot to like about God of War. The problem is that there's also a few things to not like, they'd potentially eat up large chunks of time and a whole lot of people seemingly downplayed or completely ignored them in order to not lose any momentum in praising this game as being among the best of the best, deserving of being revisited regularly. For my part, I'm just glad to be able to say I made it through it once and can finally put it away for good.

If you enjoyed this God of War review, you're encouraged to discuss it with the author and with other members of the site's community. If you don't already have an HonestGamers account, you can sign up for one in a snap. Thank you for reading!

© 1998-2021 HonestGamers
None of the material contained within this site may be reproduced in any conceivable fashion without permission from the author(s) of said material. This site is not sponsored or endorsed by Nintendo, Sega, Sony, Microsoft, or any other such party. God of War is a registered trademark of its copyright holder. This site makes no claim to God of War, its characters, screenshots, artwork, music, or any intellectual property contained within. Opinions expressed on this site do not necessarily represent the opinion of site staff or sponsors. Staff and freelance reviews are typically written based on time spent with a retail review copy or review key for the game that is provided by its publisher.