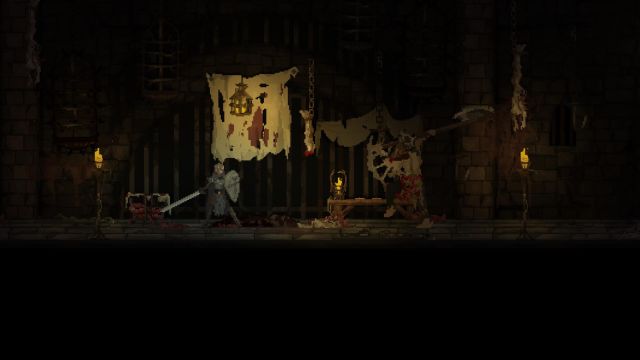 I threw my hands up in disbelief. How could something like this happen within the first few minutes of play?

I entered the main dungeon in Dark Devotion, expecting an experience similar to its simple tutorial stage. That expectation died a horrible, impaling death when an unseen spear poked out from the ceiling and skewered me. That strike tore off one of my armor points, leaving me with only three hits before I could even get my feet wet. None of that mattered, though, because I took two more steps after that mishap and plummeted onto a bed of spikes. I had no choice following the first trap but to drop off a ledge, but I believed that the ground directly below it would be solid stone and not jagged points of instant death. "Why did I agree to play this?" I thought as my corpse vanished from the dungeon and respawned at the hub.

I made other awful discoveries as I advanced, too. For instance, I confirmed that there was no jump function on offer, and that I would be firmly planted on the ground the whole time. On top of that, most rooms featured "drop-off" points that prevented me from backtracking in case I missed something useful. Since I couldn't leap, I was unable to jump back up loftier platforms as I could in most side scrollers. Then again, even if I could return to the chamber's entrance, I couldn't get through the door anyway. If I wanted to revisit a room I'd previously cleared, I'd have to either die or teleport back to the hub and re-enter the dungeon. This was especially irritating because some rooms branch into multiple routes, with pathways that are easy to miss if you advance too far or accidentally take the wrong door.

Combat also took some getting used to because it initially felt so clunky. I had a hell of a time figuring out when and how long to block, as well as timing attacks and evasive maneuvers. More often than not, I ended up fighting too defensively and draining my stamina, leaving me open for the beating of my life. I typically didn't even live long enough to activate one of the teleporters, which served as checkpoints. By walking through one in the hub, I could instantly warp to the most recently accessed portal in the dungeon. As you can tell, these devices were a must for surviving the campaign. 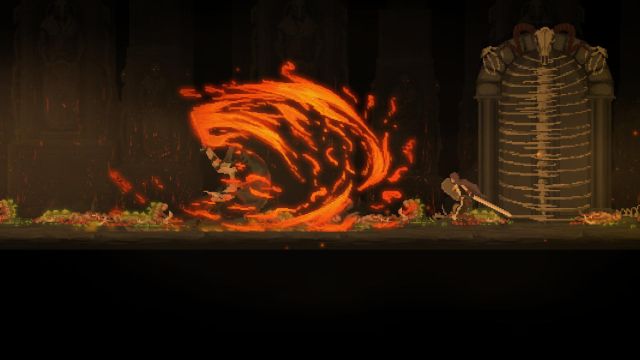 Each voyage ended with my death and a shameful return to the hub, my inventory empty and my spirits broken. One region of the map displayed the Ancient Tablets I'd found (none at this point), which permanently boosted my stats, plus the blacksmith held any equipment I had unlocked. That list also contained a big, fat nothing. My own lack of progress and prizes inspired me to keep playing, thinking that all the while I would continue to abhor my time in this dungeon. As always, things change...

So I ventured into the depths and tinkered with a bunch of features. I prayed at shrines and altars, spending a stat called "faith" to earn consumables and temporary weapons and armor. I also learned to tread carefully and explore with caution so I wouldn't advance too far into a room. That allowed me to discover hidden levers and weakened walls that I blew open, accessing other little goodies. I also slew my share of foes and unlocked new pieces of equipment at the blacksmith's quarters, allowing me to live longer and kill with more efficiency.

I eventually made peace with the game's more irksome mechanics. Since I couldn't jump or backtrack, I had to fully commit to my actions when advancing through a stage. If there was even a shred of doubt regarding whether or not I wanted to press onward, I would hold off and recheck the environment I had already tread for secrets. This strategy eventually became second nature, and I soon forgot about those two qualms. 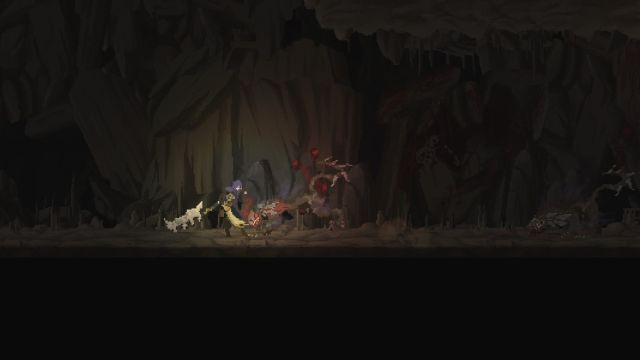 Around the same time, I honed my fighting skill. I learned to time attacks and rolls, as well as watch my enemies before acting. Each adversary fought with a pattern, and all it took was a little observation to get it down. On top of that, the game features a very fair system in regards to its tuck and roll function, where you can interrupt your own strikes by dodging. Plus, the dodge ability completely cancels damage, even if a bolt of lightning collides with your tumbling sprite. I appreciated both of these design choices, partly because the game's difficulty rating would've been ridiculous without them, but also because it kept the best battles moving at a snappy pace.

I soon found myself surviving and progressing deeper into the pit, and the horrible things I saw beckoned me to travel further. I moved away from your standard undead warriors and onto worse things like mangy monsters with gaping maws, primordial rock beasts that belch lava, horrible green children born of the incestuous bond of otherworldly beings... I could rattle of Dark Devotions horrors for days, because they're all so wonderfully dark and awful.

Strangely, I found myself enjoying this game. I would start a session, examine the map for tablets I hadn't acquired or routes I hadn't explored and try to get to them. I'd then puzzle out the landscape, figuring out where hidden passages lie and how I could best get to them without screwing myself over. Sometimes I needed to look for a ladder or a gust of wind that would carry me upward. Other times I had to figure out how to open a closed gateway. 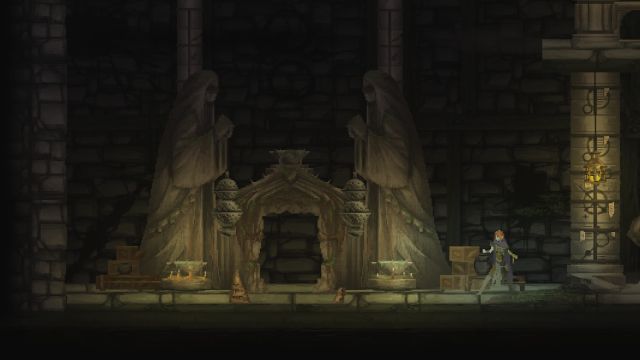 Along the way, I powered through some exciting scenes where I battled priestly ghosts, rescued helpful NPCs, killed a malicious executioner, dealt with exploding corpses and battled a huge, pregnant entity that transformed into a crawling witch. Granted, I still had my share of complaints, including a frustrating conflict with a feathered sword-wielder and a boss that glitched in my favor. The poor guy just stopped moving for no reason at all, allowing me to cut him to ribbons and moonwalk to the next area.

I enjoyed most of the bosses and tough segments, sure, but I was more impressed by the game's ability to distinguish itself from other Dark Souls-inspired works. This one captured the mood and mechanics decently, plus it placed an emphasis on risk and reward, while also eschewing other Souls elements. I didn't boost my statistics with experience, or lose that experience in the dungeon when I died, or encounter a whole lot of particular scenes that are obviously lifted from the now-legendary RPG. I spent more time poring over a map and wondering where all of the best secrets lie, while selecting choice pieces of equipment or skills (perks you unlock at the hub, in exchange for experience) to craft my character to my liking.

Dark Devotion isn't just Templar Souls, nor is it a clone of games like Salt and Sanctuary or Hollow Knight. It possesses a distinct identity that might borrow some elements from FromSoftware's hit, but ultimately stands on its own two feet. It re-imagines the experience as an uncompromising dungeon crawler, where you must fully commit to progressing through its dank halls because you can't venture back without some kind of sacrifice. It's a dark, wretched, tough, action-packed adventure that I'm glad I got to play through.

If you enjoyed this Dark Devotion review, you're encouraged to discuss it with the author and with other members of the site's community. If you don't already have an HonestGamers account, you can sign up for one in a snap. Thank you for reading!

© 1998 - 2022 HonestGamers
None of the material contained within this site may be reproduced in any conceivable fashion without permission from the author(s) of said material. This site is not sponsored or endorsed by Nintendo, Sega, Sony, Microsoft, or any other such party. Dark Devotion is a registered trademark of its copyright holder. This site makes no claim to Dark Devotion, its characters, screenshots, artwork, music, or any intellectual property contained within. Opinions expressed on this site do not necessarily represent the opinion of site staff or sponsors. Staff and freelance reviews are typically written based on time spent with a retail review copy or review key for the game that is provided by its publisher.