Being that SNES users were having all the fun with Castlevania and Contra games, I was pretty down and depressed. That changed when Konami decided to brake off Nintendo's guiding hand to make a couple titles from said titular games for the SEGA Genesis in the 90s. One of such being Castlevania Bloodlines, which was very welcomed into the system and pretty much was gem of its own among other related games on the series. What made this game special besides being a Genesis title is that it had ties with historical events, figures, and was also a lot more close to Bram Stockers' novel than any other title before it. 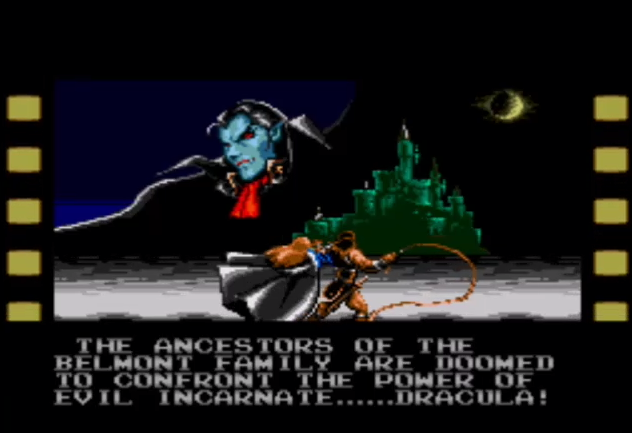 The game features John Morris, latest in the line of vampire hunters who wields the enigmatic Vampire Hunter used by the Belmont Clan, along with his comrade in arms Eric Lecarde equipped with the Lecarde Spear to help fight against the hordes of Dracula. The game also features a new antagonist named Elizabeth Barkley, who is in-game's niece to the nefarious count and the reason that his latest resurrection takes place during the events of WWI. Both hunters travel all over Europe trying to track down Elizabeth before she succeeds in resurrecting Dracula, fighting off in exotic places like Greece, Germany, and Italy. 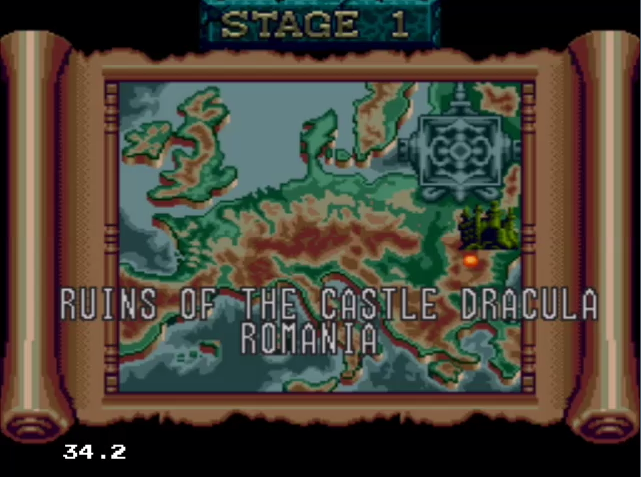 It is quite interesting the fact that Morris himself is related to Quincy Morris, one of the main characters in the Bram Stocker's novelization and the one who drove Dracula back into his coffin years before the events of the game, thus opening the right of passage towards John when the count is back to cause havoc in the world. Elizabeth herself is based on an infamous woman of the same name, who was rumored to bath in the blood of virgins in order to keep her youth. All over the game you will also find subtle references towards lore and horror in all countries that the game take place, something that makes for such a unique adventure within the series. It is also worthy to note that Elizabeth here sets in motion the events leading to the horrific first World War in order to resurrect her uncle dearest. 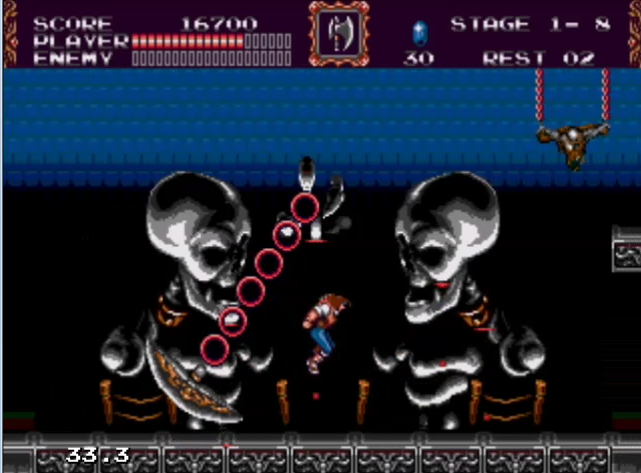 The gameplay varies depending on who you choose. John would resemble any Belmont who uses the famed whip so he would feel right at home with any who chooses to play as him, such as the ability to use the Vampire Killer to strike diagonally and below John, as well as using it to hang from walls to cross over pits. Eric introduces a variety on gameplay all of his own, using this lance to vault himself to reach further places and avoid damage. Besides these differences there is not much to compare both heroes, being that both cause the same level of damage overall. The game has quite the level of difficulty, making it as hard as previous titles on the NES system, but at the same time pretty enjoyable to play through. You may curse at some nasty medusa head knocking you over to your doom, but you still have a fair amount of chance to complete each level without feeling cheated.

The sub-weapons here are not that many and a bit different than other games. The cross for instance is replaced by a blade boomerang which serves the same purpose. Only three sub-weapons are ever featured here along with the axe and holy water, plus a special orb that powers up your weapon further and becomes a more powerful item crash when used. Instead of tapping up and the attack button, the sub-weapons can be used on a separate button, making all three buttons on the SEGA Genesis console usable on this game. The item crashes can be performed when pressing up+the sub-weapon button. 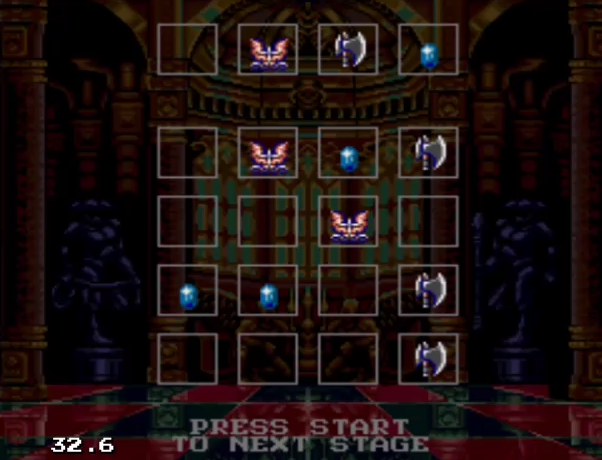 The visuals and sound on this game are just outstanding. You can dazzle at the view on some stages, such as with the reflection on the water at the beginning of stage 2 and the rotating stage at the leaning tower of Pisa on Italy. The sound effects are fair, but the game shines on its amazing soundtrack composed by Michiru Yamane, who would also compose the soundtrack for Symphony of the Night years later. Each stage draws you in with its visuals and music long enough to keep you interested.

While the game sports limited use of continues, it also features a password system to continue where you left off if you don't feel like starting all over again. This is pretty handy given that although it features only 6 stages, they are some of the toughest you would ever face off against, and the final stage is a real dozy just as well.

Castlevania Bloodlines is well worth collecting it, not only because it was the sole title to be featured in the SEGA Genesis but also because it features such solid gameplay and a strong presentation overall. This entry in the series is a mighty title all its own.