Trine is one of those franchises I always admired from afar and wished I had time to play. When the opportunity to review the fourth installment recently came along, I decided the ideal moment had arrived at last. I would finally see for myself if those beautiful worlds I had glimpsed in screenshots were as much fun to explore as they looked like they must be. And they... weren't quite.

Trine 4: The Nightmare Prince is the fourth entry in a series of platformers featuring three brave heroes who periodically band together to fight evil. Their latest adventure begins when Prince Selius escapes the wizards' academy where he had been imprisoned for his own good. He has awoken a dark magic, and now spends his time roaming the world, bringing nightmares to life as he battles a darker side of his personality that threatens to destroy the lives of those who come in contact with him. So of course, the usual three heroes--a knight, a wizard and a rogue--must do what they do best and save the day. Along the way, they'll have to battle their own demons and prove they still have what it takes.

In general terms, Trine 4 is a platformer. The developers have an abiding love for puzzles that tends to get in the way of that, however. The worlds you explore are achingly beautiful but sometimes a chore to navigate. Luckily, the three opening stages function as capable tutorials that introduce the heroes and the skills you'll need to use to get around. Amadeus is a spell caster who controls elements of the surrounding landscape, pulling blocks into position or even conjuring them out of thin air. Pontius is a heavy bruiser who uses his sword to hack through adversaries and his shield to deflect otherwise lethal blows. Finally, Zoya is a bandit. She fires elemental arrows at enemies and grapples to distant points.

As the campaign proceeds, the heroes learn new abilities that tie into their basic moves, allowing them to negotiate increasingly difficult puzzles. For instance, Amadeus eventually produces a wider variety of objects, such as a metal ball that rolls safely over spikes or a long, flat bit of panel that is especially useful to bridge wider gaps. Also, he'll be able to summon two or even three such objects at once, instead of just a single one as is possible initially. The most important enhancements are automatic and unlock at key points in the campaign. Once you learn a new skill of the vital variety, you immediately are called upon to put it to use in a safe environment. Then you have to use it more daringly in the stages that follow. Other improvements are comparatively minor but still worth your while. As you collect experience vials, you gain points toward the desired improvements, so there's extra incentive to explore every deviously hidden nook and cranny. 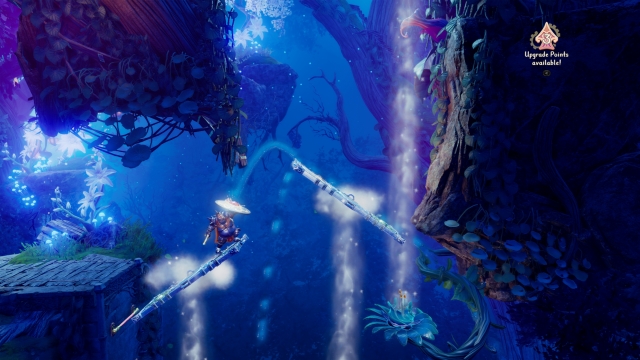 I don't want to sound like I hate solving puzzles in a platformer. But although I appreciated the brain benders offered here, they often serve as a substitute for the more conventional platforming segments I tend also to relish. Stages typically consist of a collection of small areas organically connected by pretty scenery. You ponderously advance from one area to the next, working through puzzles but rarely feeling a sense of momentum. I quickly began to miss the game's opening stages, where there was more jumping and smashing. Occasional battles with the nightmare creatures your quarry has left in his wake do break up the monotony somewhat, but these conflicts are too basic to serve as an enduring diversion. You hop around on ledges and slash at monsters, or throw them around with magic or fire arrows at them while moving out of their way. Some duels get a bit trickier by the end of the game when your foes finally grow some teeth, but they still feel too limited.

Boss battles, on the other had, show some of the same inventiveness that otherwise is reserved for puzzles. Generally, you face a big bad guy with only one of your heroes at your disposal, which means the strategies you must use to vanquish your target are fairly specific and obvious but may demand reflexes you won't have to put to the test much of anywhere else. Pontius has a very physical duel with multiple threats, for instance, and Zoya relies on her speed to vanquish a powerful adversary. The final foe is actually quite challenging, I thought, to the point that some players may give up in frustration just shy of the closing credits. It feels somehow unfair to finally have to work to defeat something, after spending nearly the entire game up to that point solving puzzles that require considerably less dexterity. Then again, there is an Easy mode on offer. Not everyone has to play on Normal like I did.

Speaking of puzzles (again), I should stress that my biggest problem with them was the constant need to swap between heroes and skills. It seemed like each new screen required me to switch to a different hero, even early in the campaign. By the end of that run, I typically had to switch back and forth several times in each tiny area, usually to conjure up blocks as Amadeus so Zoya could tie them together and then grapple over fatal spikes. Even when a single character was able to negotiate a hazard, he or she sometimes needed to equip different magic or arrows, to the point where it felt like I spent most of my time cycling between protagonists and abilities. The process never quite felt natural, and it robbed me of the feeling of empowerment I've gotten from other similar titles within the genre. I suspect those who play multiplayer with friends--either locally or online--will find this issue less pervasive. 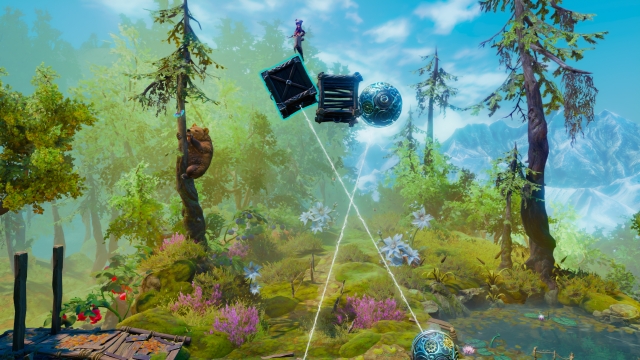 I wanted to love the game without reservations, but instead I found myself surviving an adventure that rarely let me really enjoy the beauty that surrounded me. It's difficult to put into words just how much of a delight the art direction is (and for that matter, the audio), one stage after another. Picture your favorite childhood storybook come to life, only better. So it's a shame I was usually too busy solving samey physics-based puzzles to properly appreciate the splendor. For every gorgeous vista, and for every glimpse of a cat leading her kittens across a street while a dog barked in the distance, there was another spike bed I had to cross using roughly the same inconvenient techniques that allowed me to clear the previous dozen spike beds.

In spite of the frustrations I had along the way, I enjoyed my time with Trine 4: The Nightmare Prince enough overall that I feel good recommending it to others (and especially to those who dig environmental puzzles). I just can't say I came away feeling inspired to go back and visit those earlier titles in the franchise that I had never gotten around to playing. At least for now, one extended visit to that world is plenty.

If you enjoyed this Trine 4: The Nightmare Prince review, you're encouraged to discuss it with the author and with other members of the site's community. If you don't already have an HonestGamers account, you can sign up for one in a snap. Thank you for reading!

© 1998 - 2022 HonestGamers
None of the material contained within this site may be reproduced in any conceivable fashion without permission from the author(s) of said material. This site is not sponsored or endorsed by Nintendo, Sega, Sony, Microsoft, or any other such party. Trine 4: The Nightmare Prince is a registered trademark of its copyright holder. This site makes no claim to Trine 4: The Nightmare Prince, its characters, screenshots, artwork, music, or any intellectual property contained within. Opinions expressed on this site do not necessarily represent the opinion of site staff or sponsors. Staff and freelance reviews are typically written based on time spent with a retail review copy or review key for the game that is provided by its publisher.