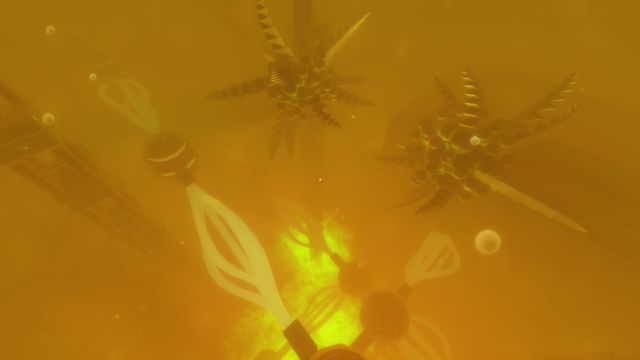 Lovecraft-inspired games often miss the point of Lovecraftian horror. Some developers overload their titles with tentacles and insanity, then call it a day. They completely ignore one of the author's major themes: the cosmic insignificance of humanity. We are but dust mites compared to the creatures and worlds beyond our planet. To even glimpse the reality outside of our own universe would drive us mad, while our puny brains struggle to make sense of ideas way, way beyond our grasp. Or, as one internet meme put it: "Oh god! I can see forever!"

Eucildean mostly gets this concept right.

You start the game without a proper menu, standing on a cliff overlooking the sea, wondering what you're supposed to do next. You examine your surroundings, but don't locate a "new game" selection. Eventually, you turn your gaze to the moon, and suddenly you lose your grip on reality. Your body becomes ethereal, you slip through the ground beneath you and pass into a nightmarish alternate realm.

Most first-person adventures are referred to as "walking simulators" because all you do is mosey about and look at things. However, Euclidean is a "falling simulator." Each level is a different section of some alien ocean, crawling with all manner of horrible beasts and illogical creatures. Vast crustaceans dance around in predictable patterns, weaving in and out of mighty ruined temples and cities long destroyed and forgotten. Tiny sea bugs protrude from the walls, prevent you from hugging them for security. Massive globs of flesh pulsate and swim, heedless of your presence. At times it's difficult to tell if you're looking at an ancient structure or a being, or perhaps both. Think of the experience as if you're skydiving into hell. 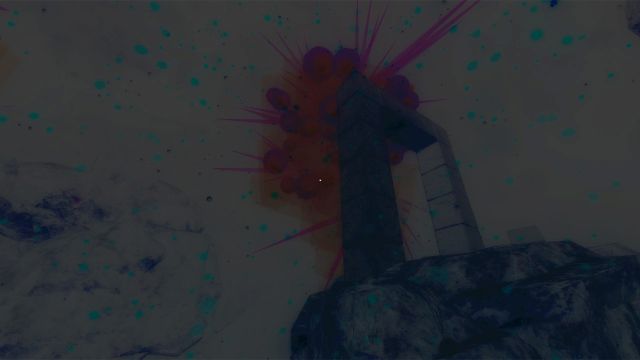 As you might've guessed, plummeting into walls or monsters is hazardous to your health and sanity. Your objective thus is to slowly maneuver around these beasts, occasionally using a phasing ability that allows you to temporarily pass through some life forms. This function also shows the movement paths of foes below you, allowing you to plan ahead and try to swim away from them.

Strategize all you want, though. The abominations will still catch you, and you will suffer a horrible, screaming death before respawning (unless you activating perma-death in the options menu). True to its name, Euclidean revolves around geometry. You must take into account not only your sinking speed, but each critter's velocity and pattern. While you're avoiding one path, you may also inadvertently steer yourself into another enemy's route and end up dying anyway. You might also find that swimming away from one eldritch horror leaves you dangerously close to a boulder or a wrecked building. Ironically, you might've been safer staying close to the monster.

Trial and error play a huge role in survival. You're constantly thinking, "What if I maneuver this way, hug the wall here, push away when that shrimp-snake arrives and then fall into a gap in the staircase here... Oh, crap, there's a.... I don't think there's a word for that thing, but it killed me." Repeatedly, you die and try again, puzzling out which string of movements successfully guides you through the menagerie and their dilapidated stomping grounds. Once you've made it through, you should be able to spot a blue dome comprised of sigils, with a pedestal sitting in the middle of it. If you're lucky, your slick moves left you with plenty of time to float over to this structure and finish the level. However, the game loves to find ways to throw you off. Don't be surprised if you find yourself miles away from the goal, falling into a layer of the sea so dense that even your immaterial body can't handle it. 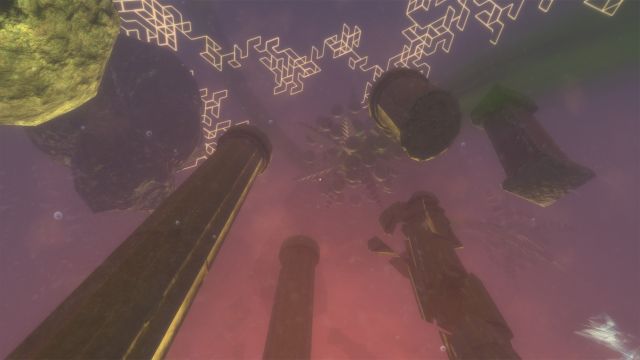 I won't fault you if you can't make it through this title, though. Euclidean can be frustrating, mostly because there are points where you perish and you're not sure how. One moment, you're descending gleefully, taking in the otherworldly images with awe. You might even catch yourself staring into the murk, squinting your eyes to make out the other anomalous shapes coming into view. That's when an unseen foe pops out from behind a rock and mows you over. Perhaps your heart dips then, because you realize that Euclidean features a curious environment, but punishes you for trying to enjoy it.

Other times, you think you're rocking and you're going to reach the bottom with no problem, only to be plowed by a monster you couldn't have known about. This phenomenon isn't all that frequent, but it's always annoying and cheap. I realize that such scenarios are inevitable, given Euclidean's core design. However, it's no less unwelcoming to know that sometimes you're powerless to prevent your own demise. 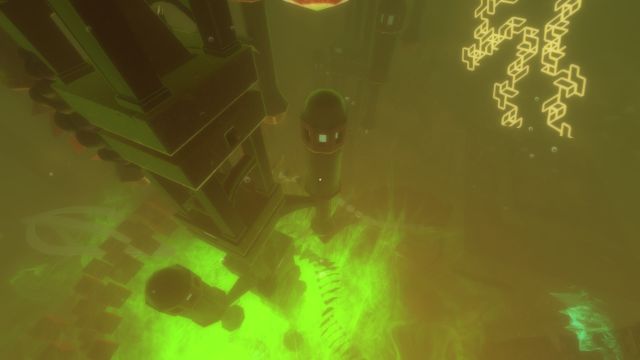 But perhaps that's part of the game's plan. What does fairness matter to realms outside of the boundaries of Earth? Our sense of justice and rightness must be so trivial to the creatures here that our untimely death and annoyance aren't even worthy of the mildest of concern. In other words, Euclidean doesn't give a damn about you. It doesn't even go out of its way to stop you. Its bestiary simply wanders around, ignoring you because you are insignificant. It's terrifying to think that our hero perhaps accidentally ended up in a space packed with entities so powerful that they don't care if they steamroll him or let him slip by them. That's where this adventure truly nails its Lovecraftian elements.

Hats off to developer Alpha Wave Entertainment. They managed to produce a Lovecraft-inspired piece doesn't involve your character running away from familiar monsters. They gave us a game packed with shifting architecture, cephalopod-like beings made entirely of cubes and worlds so peculiar that you can only stare and ponder what function every piece of it serves. You'll never know, and that's the beauty of it. Euclidean is a gloriously grim dive into insanity.

If you enjoyed this Euclidean review, you're encouraged to discuss it with the author and with other members of the site's community. If you don't already have an HonestGamers account, you can sign up for one in a snap. Thank you for reading!

© 1998 - 2022 HonestGamers
None of the material contained within this site may be reproduced in any conceivable fashion without permission from the author(s) of said material. This site is not sponsored or endorsed by Nintendo, Sega, Sony, Microsoft, or any other such party. Euclidean is a registered trademark of its copyright holder. This site makes no claim to Euclidean, its characters, screenshots, artwork, music, or any intellectual property contained within. Opinions expressed on this site do not necessarily represent the opinion of site staff or sponsors. Staff and freelance reviews are typically written based on time spent with a retail review copy or review key for the game that is provided by its publisher.