I've said it before and I'm saying it again: While I used to live and die with the JRPG, that genre is getting increasingly more difficult for me to play. Those games seem too happy to ride with the same plot elements and character archetypes and I've been playing them for over half my near-46 years on this planet, putting me at the point where I just want something new. And speaking of that, there are a number of talented Western designers who've taking the role-playing game to levels I never would have imagined in my youth, creating massive worlds with tons of stuff to see and do. If I don't feel like advancing the main quest, there are tons of optional missions, or perhaps I'll just wander through the wilderness and look for interesting sights to see. We only spend a finite amount of time in this life, so why waste it simply going from Point A to Point B as the plot dictates?

But exceptions must be made at times. Times such as when a new Dragon Quest game is released. That was the series that introduced me to the JRPG and I've long had a soft spot for it. So, when I purchased a PS4 and saw the release of Dragon Quest XI was imminent, it was a no-brainer that it'd wind up in my hands sooner, rather than later.

And you know what? For about 100 hours, all the pent-up frustrations I have with the stagnation of the genre faded. Cynicism turned to joy and I sat there on my couch in a state of rapture. I mean, by the end of the game, I was rushing through the final few post-game activities in order to put down the true final boss, so I could start something elsebut for a glorious while, it felt like I'd gone back in time to an era when I loved this stuff.

Dragon Quest XI makes that easy. The vast majority of monster designs are exactly the same as they were on the NES or SNES, only upgraded and animated to fit in with today's graphics. Towns might look like actual communities now, but possess the same shops, inns and churches that they always have. While things may have greatly changed on an aesthetic level, at its heart, Dragon Quest XI FEELS like Dragon Quest in all the right ways. 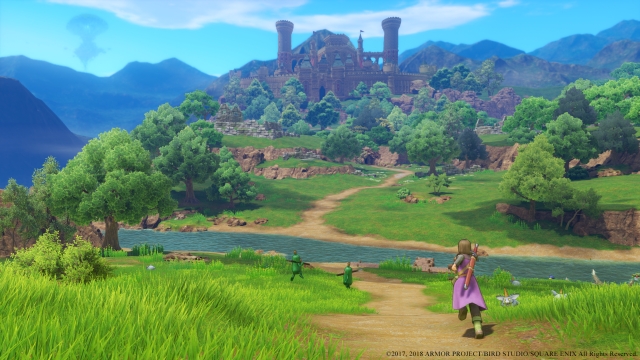 So, yeah, I admit that nostalgia fuels my enjoyment of this game. I looked forward to exploring each new land in order to see how monster designs evolved over the past few decades. My ears were open, eagerly awaiting call-backs to those iconic tunes and sound effects of yesteryear. Even if this game included factors that had me grumbling about how this sort of thing is why I play the Western RPGs and not the Japanese ones nowadays, they didn't bother me so much because this is Dragon Quest and at long last, I had a brand new one in my hands!

Even when I go through the effort of peering through that nostalgia, I have to admit this is a fun game and not just the latest entrant in a series I've loved for so long that I'll always be looking at the sunny side of everything, regardless of actual quality. Dragon Quest XI is easy to get into, fun to travel through and spends much of its run-time at a difficulty level where it's pretty easy, but never to the level that you can simply coast to victory. Sure, things are really easy in the early going, but as you get farther into the game and virtually every boss, as well as several regular encounters, can attack multiple times per round and routinely whip out instant death spells, you will be needing a strategy a bit more intricate than "press attack to win".

Then again, one could say that the difficulty of this game is what you make it. Much like the DS-hosted ninth installment in the series, monsters are visible entities while walking the world or its dungeons (but still randomly fought on the ocean) and they aren't the most aggressive of creatures, so you can essentially fight as much or as little as you want. You also can make as many trips to any part of the world as you desire in order to collect all sorts of materials used to craft weapons and armor, as well as work and re-work those crafting attempts as many times as necessary to get the best possible results. And, of course, character-building also factors into the equation. Each of your many party options has an expansive skill tree loaded with stat boosts, skills and spells that can be unlocked with points gained upon obtaining levels. If a player is diligent enough, they will be able to dispel much of this game's potential difficulty; while a person who does the bare minimum will find things a good bit trickier.

Since this is a Dragon Quest game, you will be finding yourself on an epic quest to dispatch a villain capable of destroying the world. However, I give Square-Enix credit for at least altering the route taken to that conclusion a little bit. As typical for this series. you're a young lad from a remote town whom, after completing a rite of passage, is sent off to the region's king in order to find his destiny as the Luminary, a hero destined for greatness. However, when he reaches the castle, you'll quickly discover that all is not as it seems. The king denounces you as an evil being of destruction and imprisons you in the deepest, darkest part of his dungeon. Fortunately, you get a bit of help from another prisoner, a young thief named Erik, and are able to escape. Now, you have to travel the planet, find more allies and figure out a way to clear your name -- all while being diligently pursued by the king's top generals, Hendrik and Jasper. 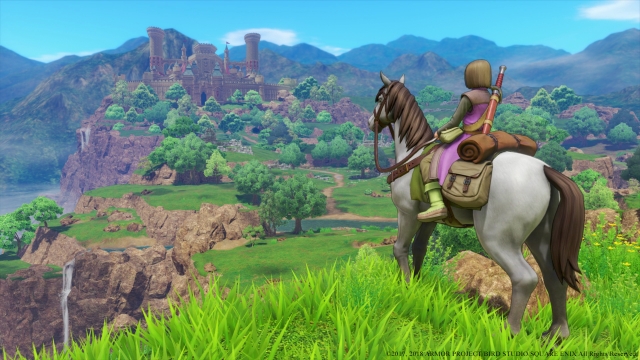 Generally, each country of the world has its own self-contained quest and by completing it, you'll get one step closer to achieving your destiny, either gaining a new party member or an important item that will grant you access to another location. While the world isn't the largest, as far as towns, dungeons and other points of interest go, the game makes the most out of its locations, as it's divided into three lengthy chapters. The first two concern your attempts to clear your name and then battle back against seemingly impossible odds to overcome the main villain. Win against him and you'll be able to take on the challenges of the post-game chapter, which give you the opportunity to set right an event that went really wrong and then take on the game's true final boss and get an improved credits sequence which plays homage to the preceding games in the series.

This was the first time in a while where I had a legitimately great time playing a modern JRPG. My enjoyment didn't really dwindle until I was in the post-game and that didn't prove to be much of an issue, as most of the stuff you can do by this point are optional battles designed to help you boost your powers in preparation for that powerhouse of a true final boss. My main issue with the game is simply one of those things endemic to the JRPG genre in general -- a lack of anything particularly interesting to do outside of the main quest. There are a number of short side quests often having you do simple tasks such as defeating a particular enemy with a particular ability, obtaining or crafting a certain item or piece of equipment, or finding something hidden somewhere in the world. You can take part in horse races in one city, while two others have casinos and you also can start a world-wide journey to shoot well-hidden target with a crossbow. And, of course, there is the regularly-featured game-long quest to find Mini Medals and turn them in for items.

The key word being "interesting". Those side quests are mere diversions, with few (if any) actually standing out; while I had little interest in doing anything else besides looking for Mini Medals. In the post-game, there are a few optional dungeons, but they're nothing more than slightly reworked versions of places you'd explored previously that are inhabited by tougher foes. For the most part, this is the sort of static environment one expects from these games. After your first trip to a town or dungeon, any further trips will likely have you running to your objective as quickly as possible without taking the time to talk to people or explore, as barely anyone will have anything interesting to say (and those who do will be denoted as such on your map). I was enthralled by everything on my first trip to places, but the law of diminishing returns was in full effect. During the second chapter, I was really into the story, but not so interested by my surroundings, and by the post-game, I was through savoring the game and ready to rush through its final challenges.

Those issues aside, I have to call Dragon Quest XI a success. The last few JRPGs I played, I found myself going through the motions fairly regularly, even if I liked the game. But this was different. At least for a while, I was transported back to the time when I looked forward to playing these games at the expense of any other genre. Maybe this is a legitimately great entrant into a venerable series or maybe my nostalgic trip was able to overwhelm my cynicism and fatigue towards this sort of game, but I had a good enough time to feel confident in recommending this one to anyone who at least is a fan of Dragon Quest.

If you enjoyed this Dragon Quest XI: Echoes of an Elusive Age review, you're encouraged to discuss it with the author and with other members of the site's community. If you don't already have an HonestGamers account, you can sign up for one in a snap. Thank you for reading!

© 1998-2021 HonestGamers
None of the material contained within this site may be reproduced in any conceivable fashion without permission from the author(s) of said material. This site is not sponsored or endorsed by Nintendo, Sega, Sony, Microsoft, or any other such party. Dragon Quest XI: Echoes of an Elusive Age is a registered trademark of its copyright holder. This site makes no claim to Dragon Quest XI: Echoes of an Elusive Age, its characters, screenshots, artwork, music, or any intellectual property contained within. Opinions expressed on this site do not necessarily represent the opinion of site staff or sponsors. Staff and freelance reviews are typically written based on time spent with a retail review copy or review key for the game that is provided by its publisher.