As I played Soldak Entertainment's Din's Legacy, it was hard not to have flashbacks to 2016, when I was playing a previous title from the developer, Zombasite. Both games use the same engine and are quite similar in, well, most things. Both are Diablo-esque action-RPGs that find you protecting a settlement while killing hordes of monsters and clearing tons of quests. There are a fair number of ways to customize your current adventure to make it easier or more difficult to complete and, if things get too hairy, you can abandon what you're doing at the time to start over with that same character in a brand new procedurally-generated world.

And you know what? While this might be a clone of Zombisite in many ways, that isn't a bad thing because it's at least an improved clone. Some of the most annoying things about its predecessor were either eliminated or downplayed, while none of the additions grated on my nerves. I found myself playing (and enjoying!) this game for a decent amount of time before deciding I was ready to turn my thoughts into a review. I also didn't spend good chunks of that time being confused as to why things were happening and what I could do to make my situation better -- although that likely was because I'd played Zombasite and, therefore, had a grasp on Din's Legacy's mechanics.

In brief, the way these Soldak games work is that you start each game in a small settlement containing a handful of people who will offer you quests. There also are assorted merchants and NPCs willing to join you on expeditions into the wilderness. Since you can't simply stay within the somewhat safe walls of your village forever, you'll eventually exit through one of its gates and start engaging monsters, which is most definitely me using a "fun" euphemism for butchering them. 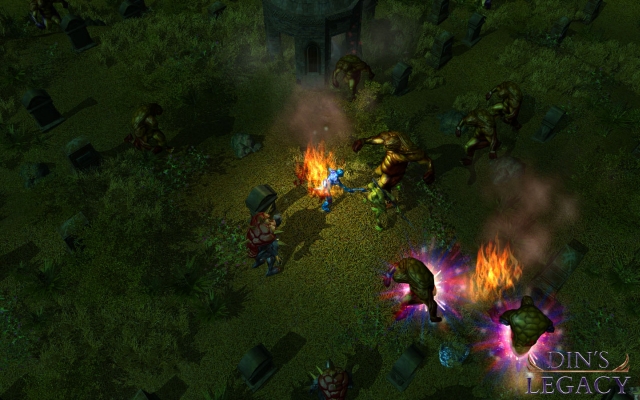 Since you'll be exploring a procedurally-generated world, each time you play through the game, there are different experiences in store; however, you can count on a few constants. You'll travel through forests, deserts, caves and other locations that have totally non-menacing names such as "Forest of Infinite Spiders" or "Desert of Creeping Deaths Aplenty" (disclaimer: those are not actual level names, at least that I've seen). By simply traveling around and killing enemies, you'll likely complete a number of quests, since many of them revolve around killing a few of a certain kind of monster or killing a unique, specially named foe. Unfortunately, you might find that for every quest you complete, two more arise. This is because you'll be placed at odds against a specific "nemesis" monster. While you're out fighting foes in order to make the world a better place for your settlement, your nemesis is doing everything within its power to erase your people from existence. The villain is busy forming treaties with other monsters, making alliances with other unique foes, erecting gates to flood an area with an enemy horde and other such deeds designed to make your life more difficult.

As you kill foes, you gain experience and, as in any good little Diablo-like, loot. Some of the many equipment drops provide your character with superior equipment, with the rest serving three potential purposes. They can be sold to add to your cash, they can be bestowed upon NPCs in your town to make them more useful in battle or they can be dismantled at your town's crafting station for components that can be used to repair your constantly-degrading equipment. You also can find doors to strengthen your town's gates against potential invaders, and relics, which offer bonuses to character and NPC stats if placed on one of your settlement's pedestals.

Making things better is the fact that a couple of the annoyances I most disliked about Zombasite aren't present, or at least I haven't encountered them. Food is now simply used as a consumable item, and doesn't need to be hoarded to feed your settlement at the risk of them becoming disgruntled and turning traitor. Speaking of that, while NPCs do have stats for things like insanity, during my time with the game, I never had a single one go crazy and start trying to hack up his or her neighbors. Those features only detracted from my enjoyment of that previous title, so not encountering them here was an addition by subtraction that only encouraged me to keep playing through world after world.

And Din's Legacy is meant to be played repeatedly. Only a handful of the many character classes are unlocked when you first start, with others gradually becoming available as you put more time into it and gain levels. Gaining levels also is necessary to unlock harder difficulties. And with the variety of challenges on offer, there's no way you'll be able to see everything without taking repeated trips through the lands. 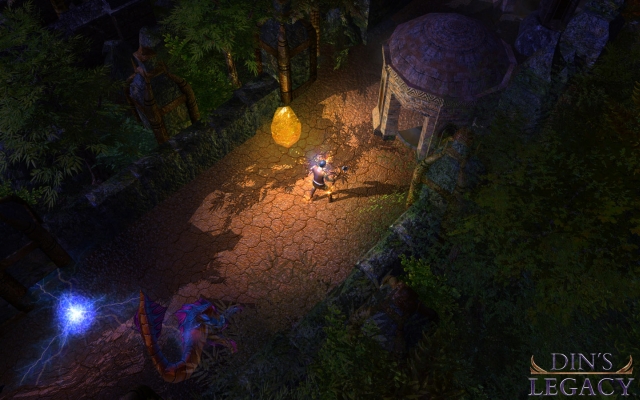 The first world I entered had my town positioned near one controlled by a rival clan -- a group of people who initially were friendly until relations quickly declined when I refused a trade that seemed skewed in their favor. The next thing I knew, a couple of them were attacking my town. This is bad, as if certain quest-giving residents are killed, you've automatically failed. So I abandoned my exploration to beat down those guys and then, just to be safe, I grabbed a particularly hardy NPC and we paid a visit to their town, killing each and every member of that clan.

My joy was short-lived, though, as my low-level adventurer and his pal quickly ran into a horde of monsters and were both killed. Now, on the one hand, death is just a minor inconvenience. You get brought back to life in your town and merely have to pay a slight penalty on experience accrued for a little while -- a "tax" that can be lessened by picking up a soul stone dropped near your corpse. On the other hand, the creature that murdered you will get promoted. Random cannon fodder transforms into a named unique and those guys get upgraded into more powerful foes. Suffer a couple deaths to a particular enemy and you'll possibly find your progress halted by a monster capable of tearing through you effortlessly while your attacks barely deplete its life. On this world and a couple others, I found it more feasible to simply cut my losses and transfer my guy to a new world.

Such as the second world I visited. For a while, I was doing good. I traveled around, killing monsters left and right, getting superior equipment and gaining levels. The only worrisome thing was how my nemesis was quite the hyper fellow, seemingly forging alliances and causing uprisings on a minute-by-minute basis, essentially creating a limitless number of quests for me to muddle through. Next thing I know, I'm swarmed by Orc Berzerkers and one of them was able to land a killing blow. Now, although accomplishing this feat did power him up, I got lucky. While enemies can get promoted in this game, they don't get their life restored, so this guy might have been far tougher to fight, but he also was near death, only needing one or two good whacks to eliminate. Which I did, although I died in the process. 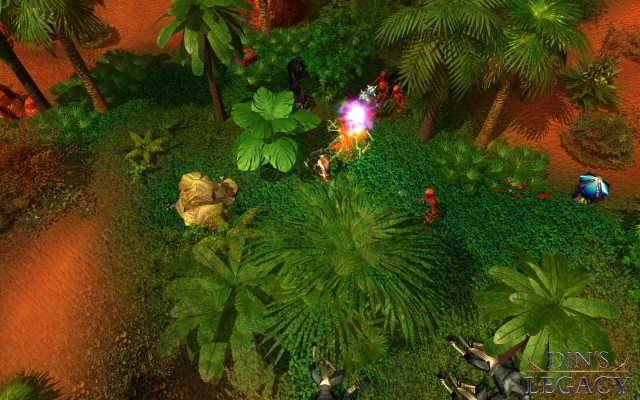 And that was an end to my luck, as I found the negative side to the game's Mutation feature. You not only get experience points for killing monsters and accomplishing quests, but also obtain mutation points. Upon gaining a mutation level, you'll gain some sort of new feature which often can boost a particular combat skill. However, suffering setbacks also gives you mutations -- in this case, a fear of orcs that lowered my combat efficiency against them. Not good, especially when I resided in an area where new orc uprisings were happening constantly. It was my first negative mutation, but not my last. In a later world, I died a couple times in a cave and got the "Claustrophobic" mutation, causing me to be weaker when fighting anywhere that wasn't outdoors.

Don't get me wrong. My time with Din's Legacy hasn't been all failures and fleeing to new worlds. I did actually get credited for victory once, as I completed every available quest. Now, whether I actually "earned" my win or merely got lucky due to a glitch of some sort might be up for debate, as my nemesis for that world was not actually present, with the quest listing for it stating something along the lines of it residing in an unknown location. As a result, I had only about 10 or 12 quests to perform, with no one around to cause trouble and add to that total. A cheap win? Perhaps, but I'll take it! Especially since my next world gave me three demonic gates as my main adversaries and all of those things were huge jerks, creating an obscene amount of work that eventually overwhelmed me.

While I don't know that I'd call Din's Legacy a must-buy game, it does make a really fun diversion. It's the sort of thing that's fun to work with on those days where you have 30 minutes or an hour of free time and just want to get in a bit of quick gaming. With a large number of character classes to unlock, a seemingly-endless number of worlds to explore and many customization options for those worlds, you get a fair amount of fun for your money. Sure, mistakes often will be punished harshly, adding some frustration to the mix; but my overall opinion on this game is still pretty positive.

If you enjoyed this Din's Legacy review, you're encouraged to discuss it with the author and with other members of the site's community. If you don't already have an HonestGamers account, you can sign up for one in a snap. Thank you for reading!

© 1998-2021 HonestGamers
None of the material contained within this site may be reproduced in any conceivable fashion without permission from the author(s) of said material. This site is not sponsored or endorsed by Nintendo, Sega, Sony, Microsoft, or any other such party. Din's Legacy is a registered trademark of its copyright holder. This site makes no claim to Din's Legacy, its characters, screenshots, artwork, music, or any intellectual property contained within. Opinions expressed on this site do not necessarily represent the opinion of site staff or sponsors. Staff and freelance reviews are typically written based on time spent with a retail review copy or review key for the game that is provided by its publisher.