A title like Island Maze suggests to me that should you choose to play, you'll be dropped into a series of corridors on an island and tasked with finding the exit. And in the developers' defense, the game does take place on an island. There just aren't any mazes.

Previously released on Steam in late 2018 for $1.99, Indiegma's little puzzle title was ported to Switch by the team at Drageus Games. On the eShop, it retails for $2.99. It's a decent value at that price... provided you like the experience on offer. To my dismay, I did not. I find the whole affair somewhat tedious, rather than "fun, smart and relaxing" as promised. 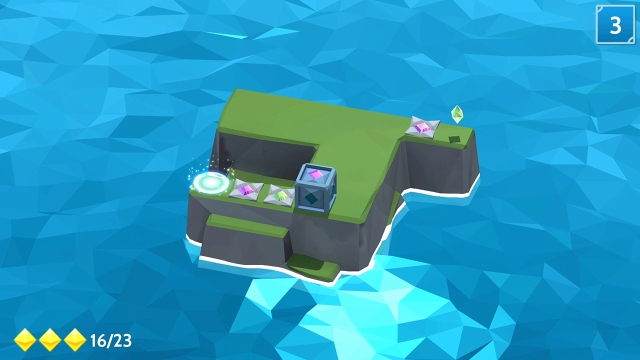 So, how does it all work? You roll a cube around small island platforms. Each roll counts as a single turn, and your aim is to reach the portal within a certain number of turns for a three-star reward. Utilize more moves than are allowed and you'll still solve the puzzle, but you will receive only one or two stars instead of three. There are 28 stages available in all, and you can only access the later ones after gathering a sufficient number of stars while completing the earlier challenges. Thankfully, the developers weren't stingy. To unlock stages 21 through 24, for instance, you only must collect 25 stars. That's a very reasonable average of 1.25 per available level. You can select from any available stages at any time, so if one proves especially troublesome, just skip it and return to it later.

If all I had to do was roll a block to the goal, I would have had an easy enough time with Island Maze, but things aren't that simple. There are sockets positioned on each side of the cube where you can fit gems and magnetic plates. If you try to pass an obstacle that is decorated with an orange jewel, you need to make sure the side of your block that touches said obstacle is similarly adorned. Otherwise, your block will crumble and then you can either undo your last turn or start the stage fresh. 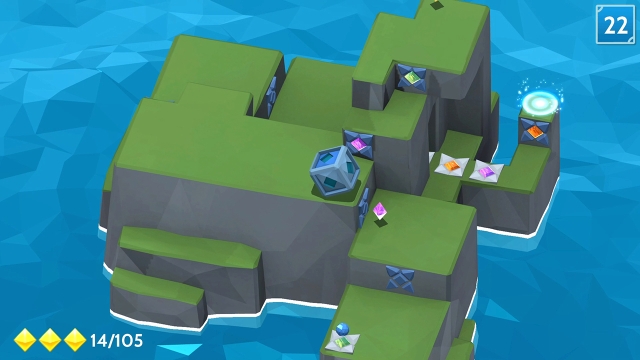 Much of the game's challenge comes from figuring out what sides of your block must have one or more jewels and magnets attached, so you can pass safely through the limited but lethal hazards. Sometimes, you need both a magnet and a jewel affixed to a particular side. It's important to think ahead, because if you put a magnetic plate on the wrong side of your cube and roll a few times, you're sometimes unable to resolve that issue without restarting. Though the game is presented from a two-dimensional isometric perspective, you must routinely consider three dimensions. The process of shuffling a block around so that the right side faces a barrier quickly loses any limited appeal it once offered.

Later stages add new challenges to the mix, such as one-way drops, harmful blocks that roll around on the same platforms you occupy and so forth. I made it most of the way through the game, but I didn't access the last set of stages and to be perfectly honest, I have no desire to do so. The game's eShop listing describes the puzzles it features as "mind-bending," and I would say that's the only entirely accurate claim it makes. The "beautiful" animations and effects are pedestrian. The controls are indeed "easy to pick up," but they're sufficiently basic that anything other than proficiency in that regard would have represented a fairly spectacular failure on the developers' part. 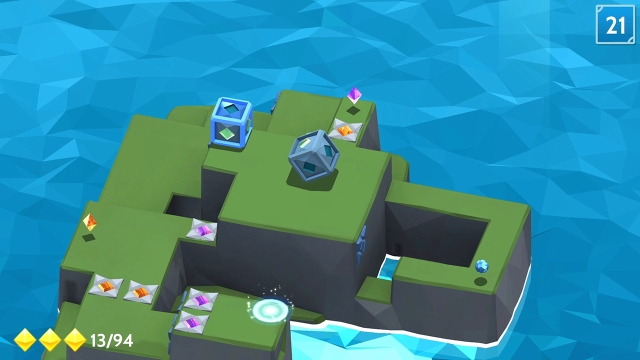 Island Maze is a mostly bland, often exasperating experience that will nonetheless cater to the very specific sort of audience that enjoys such challenges. The game is not nearly as accessible or memorable as it looks like it ought to be, but neither is it a complete disaster, so maybe take a chance on it if you happen to find it on sale and you want something a little different for your digital collection. Otherwise, my advice is to steer clear.

If you enjoyed this Island Maze review, you're encouraged to discuss it with the author and with other members of the site's community. If you don't already have an HonestGamers account, you can sign up for one in a snap. Thank you for reading!

© 1998 - 2022 HonestGamers
None of the material contained within this site may be reproduced in any conceivable fashion without permission from the author(s) of said material. This site is not sponsored or endorsed by Nintendo, Sega, Sony, Microsoft, or any other such party. Island Maze is a registered trademark of its copyright holder. This site makes no claim to Island Maze, its characters, screenshots, artwork, music, or any intellectual property contained within. Opinions expressed on this site do not necessarily represent the opinion of site staff or sponsors. Staff and freelance reviews are typically written based on time spent with a retail review copy or review key for the game that is provided by its publisher.