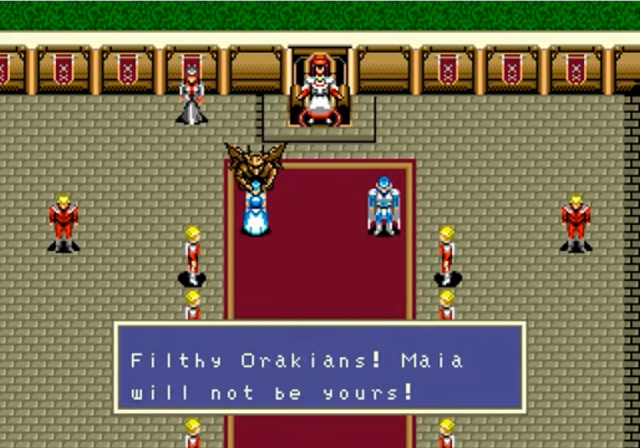 If you've never played the original Phantasy Star games before, here's what to expect: a lot of wandering futuristic landscapes, braving a world full of hideous mutants, gathering information from locals and collecting a mixture of high tech and medieval gadgets. You often struggle to survive in the early outs of these adventures, as legions of monsters constantly beat you to a pulp. Over time, you build up enough money and experience that you can live through numerous murder attempts. Even then, though, you aren't guaranteed a victory.

The first two installments in this series also didn't tell you precisely where to go, so you ended up bumping around in the semi-dark, repeatedly running afoul of dangers that wore you down and drained your resources. This was an easy system to appreciate because it kept the experience from growing stale. These games presented you with solvable challenges that seemed impossible on the surface, but could be surmounted with careful examination, investigation, grinding and/or strategy. Really, these titles didn't need to be difficult, but they used their challenge factors, coupled with a well-balanced blend of sci-fi and fantasy elements, to keep their campaigns exciting and engaging.

But then along came Phantasy Star III: Generations of Doom...

From the very beginning, you know something is off. You begin with a character clad in armor, walking through a medieval-ish town toward an ordinary castle. A small cutscene plays, wherein a monster nabs a princess. You realize at that moment that the playable sci-fi novel style from the previous two titles is gone, sadly replaced by a 16-bit Dragon Warrior knockoff. However, you might tell yourself not to worry, because robots and lasers and spaceships and conflicts that don't involve rescuing one-dimensional characters will come any minute now.... Any minute... 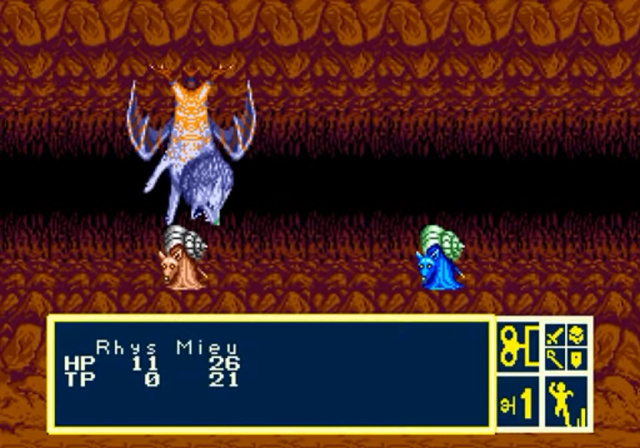 "Any minutes" slowly develops into a mantra, especially as you set out into the wilderness. The deformed beasts you fought in previous titles take a bench early on, replaced instead by stock RPG enemies and adorable critters like giant chicks and vicious rodents. On top of that, most of these beasts don't present much of a challenge, either. You'll spend most of the campaign "auto-battling" and watching each encounter speed to its anticlimactic conclusion, your party barely wounded. But any minute and you'll meet the true nightmares...

Meanwhile, the most obnoxious battle music blares, featuring the usual roleplaying tunes sped up ridiculously. And yeah, I mean "tunes." There isn't one single combat theme, but a whole collection of them, and the game jarringly transitions from one to the next at the drop of a hat. They're almost tolerable, at least, but there's one that can best be described as a "carousel on drugs" that really grates the nerves.

Still, you press onward and the game drip feeds you the occasional tidbit of creativity, before sending you back on a tedious, generic quest. You recruit an android early on, hoping she will be your guide to the good stuff. Unfortunately, from there you only embark on a handful of average plot points that see you either fetching items or sneaking into castles to add new party members, then concluding some sections with ho-hum boss encounters. 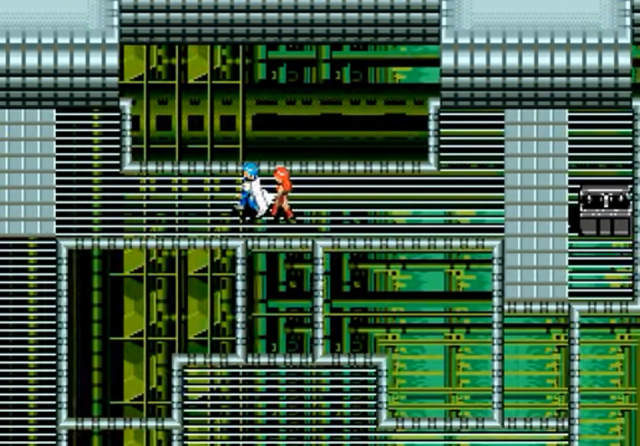 But these destinations aren't as interesting as the journey, right? At least that's how the old cliche goes. Sadly, that's definitely not the case here. Numerous points require you to make long pilgrimages across several landscapes and sometimes multiple dungeons you've already explored. You see, the game's world doesn't consists of a single realm, but several separate, interconnected maps. In order to venture from one area to another, you need to crawl through one of several connecting dungeons, and there's no way to bypass them until late in the proceedings.

All of this tedious marching serves only to drawn out segments that should be quick and easy. For instance, there's one story event where you enter a frozen land that needs to be thawed so you can cross the sea. To do that, you must travel to a neighboring desert region, which you only reach via connective dungeon. You then pad across the sand dunes to another dungeon, and advance maybe halfway through that place to your objective. Once you're done, you exit, creep back to the tunnel leading to the frosty area and finally take a boat to an island. There, you eventually hit a roadblock that requires you to head all the way back to the stage that allowed you to thaw the snow (and yes, that means you'll go through the border dungeon two more times), and delve further into it before returning to the island.

This isn't an isolated incident, either. You'll travel like this quite often through the first two-thirds of the campaign, sometimes revisiting old dungeons and towns. Let me tell you, the game really drags because of this. 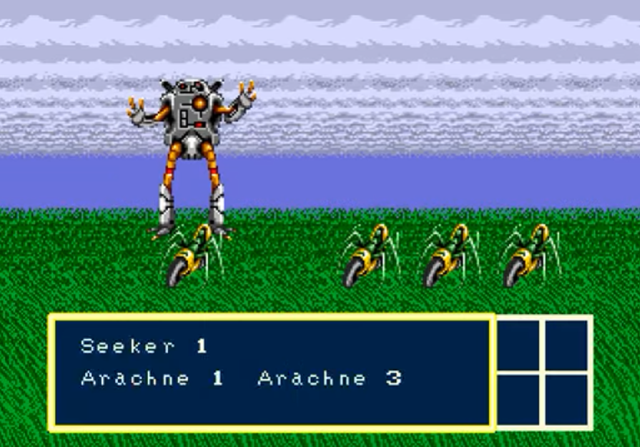 The only break you receive from the tedium is the "generations" system, where you earn the option to select a wife at certain parts in the campaign. Basically, this feature boils down to impregnating a boring character, who allows you to sire another boring character, who will replace your boring protagonist. There are two potential mates to select for every generation, with a total of four generational pathways to take. Unfortunately, they all share a fair amount of the same content, fight similar bosses and even feature very samey ending sequences, so there isn't much incentive to playing all of the scenarios.

By the time you reach the third generation, you finally feel like you're playing a proper Phantasy Star title. There's a strong mix of sci-fi and fantasy, including flying fortresses, weaponized satellites and a shape-changing robot that allows you to fly across the land. Plus, you engage in the series' standard of tough, resource-draining battles. And it only took you more than a dozen hours to reach this material! Honestly, we could've/should've been doing stuff like this from the get-go. By the time you reach the third generation, it's too little, too late.

I read somewhere that the generations system was intended to help Phantasy Star III stand out in a crowded RPG market. However, the development team put so much work into this mechanic that they couldn't properly flesh out the campaign, leading to a finished product filled with worn out cliches and underwhelming events. The ironic result is a stodgy, mediocre RPG that provides mostly dated content. Rather than offering a gimmicky feature, this fantasy adventure would've benefited from more of the imaginative, challenging content we saw in the franchise's previous outings.

If you enjoyed this Phantasy Star III: Generations of Doom review, you're encouraged to discuss it with the author and with other members of the site's community. If you don't already have an HonestGamers account, you can sign up for one in a snap. Thank you for reading!

© 1998 - 2023 HonestGamers
None of the material contained within this site may be reproduced in any conceivable fashion without permission from the author(s) of said material. This site is not sponsored or endorsed by Nintendo, Sega, Sony, Microsoft, or any other such party. Phantasy Star III: Generations of Doom is a registered trademark of its copyright holder. This site makes no claim to Phantasy Star III: Generations of Doom, its characters, screenshots, artwork, music, or any intellectual property contained within. Opinions expressed on this site do not necessarily represent the opinion of site staff or sponsors. Staff and freelance reviews are typically written based on time spent with a retail review copy or review key for the game that is provided by its publisher.