Man, I was NOT expecting this. If there is any rule of gaming I figured was at least close to 100 percent accurate, it's that an action platformer in the Super Mario universe is going to be a great time. You can look at any system Nintendo has released over the years and it's a solid bet that one or more Super Mario games will be considered among its best action titles. Whenever I play one of these games, I definitely expect to have an awesome experience.

Super Mario 64 DS was not an awesome experience. At times, it would come tantalizingly close to being one, but then something would happen and I'd feel my blood pressure rise. I'd notice my hands gripping my 3DS more and more tightly. I'd angrily bark obscenities, both real and made-up because I was so enraged my brain and mouth couldn't get on the same page to form actual words. I even flung my poor handheld system across the room in a white-hot rage once, only to immediately feel that "please don't be shattered" remorse. Fortunately, the 3DS was still operational and in one piece. Unfortunately, that meant I'd have no reprieve from this mediocre port of what is widely ranked among the best titles for the Nintendo 64. 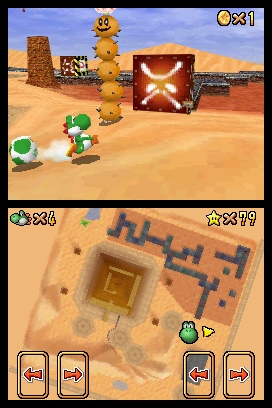 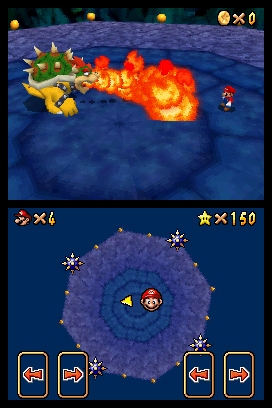 I never played Super Mario 64. I did see it in action once, though, and thought it looked pretty damn cool. And why wouldn't it? After multiple systems of Mario operating in a two-dimensional, side-scrolling environment, our mustachioed plumber was now moving in 3D, baby! Time limits for stages were eschewed in favor of making a smaller number of larger levels, each with multiple objectives to complete. Your goal was to go through each one, collecting several stars, which were obtained by meeting a diverse array of goals. Maybe you'd defeat a boss to acquire one, or you'd have to navigate a tricky obstacle course. Or collect a number of red coins. Or utilize one of the special abilities available in power-up boxes in order to reach a previously inaccessible area.

Spaced between those stages were Bowser-centric levels. You'd need a certain amount of stars to reach them, at which point you'd go through a comparatively linear trek culminating in a battle with the big turtle-dragon. While you never needed to collect all of the stars to reach Bowser, you would have to acquire enough of them to display a certain proficiency with the game, leading to a situation where a decent player could beat the game, but it'd take a dedicated one to master it.

Other changes were made from the two-dimensional Super Mario games. Instead of starting out as small Mario and finding power-ups to become larger (and more durable), you have a health bar, which also doubles as your oxygen meter for underwater areas. Coins are used to restore life and can both be found throughout the levels or obtained from stomping on monsters. You also get a few new moves, such as a crouching jump that allows you to leap far higher than normal, making Mario far more versatile and nimble than in previous games. Back when this game was released, it was obvious Nintendo was trying to make a game that was bigger, better and different from what they'd previously done in this series.

Not having played Super Mario 64, I can't comment on how well it has aged since its release, but I can tell you that its DS port is quite the flawed experience -- an unholy marriage of the issues with elderly 3D action games and the problems taking a game designed to be played with a particular controller and throwing it onto a handheld system with its own controls. 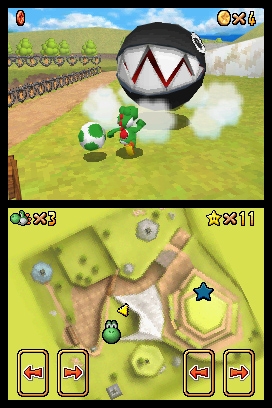 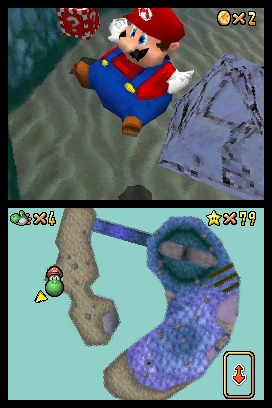 Anyone who has played both old 3D action games and new ones knows just how much the camera technology has improved over the years. Today, a game's camera is a nimble beast, usually in the right place at the right time and easily maneuvered if you wish to look in different directions. However, things weren't so smooth back in the days of yesteryear. The camera could often be slow to track your movements and might easily get caught on scenery. If you're near a wall, altering your line of sight can be a nightmare, as it often flat-out refuses to move until you're away from that blasted obstruction.

Was this a nuisance? You bet! But, with a well-made game, it never seemed to be a game-breaker. In recent years, I played through all three of the PlayStation's Spyro the Dragon titles and while their cameras also were primitive, I still had a perfectly good time. And I'd guess that by the standards of 1996, when Super Mario 64 was originally released, all the cool aspects of this game outweighed any concerns about a somewhat awkward camera. One little problem: this remake came out in 2004 and, while some things were changed or added to somewhat enhance the DS version compared to the original, the camera remains clunky and awkward. It's the sort of thing that makes me think that while a lot of superficial enhancements--smoother graphics, a bunch of mini-games, extra stars to collect and the addition of Yoshi, Luigi and Wario as playable characters--were made, the core itself was unchanged.

And at times, this can be really annoying. I particularly remember collecting stars in the game's second level, Whomp's Fortress. Overall, this is one of the game's more enjoyable stages, as you scale the exterior of a small castle to do battle with the Whomp King on its roof. Another thing you can do on that roof is kick a board over to serve as a bridge to a series of small floating islands (which is necessary when you want to obtain a couple of the world's other stars). Walking across that board is something that should be effortlessly easy, but the camera makes it a trial because it absolutely refuses to stay still behind you. As you walk, it'll gradually slide to one side, forcing you to constantly adjust it in order to lessen the risk of inadvertently blundering off and taking an unhealthy amount of fall damage. And this was far from the only time I had to walk across a fairly narrow path high up in the air with an uncooperative camera plaguing me.

That issue was only made worse by the game's controls. Playing this DS game on my 3DS, I had a few options. Immediately dismissed was using the touch screen, as after a lifetime of using joysticks, control pads, mouses and keyboards to play my games, adjusting to a touch screen for precise action controls felt counter-intuitive. That left my system's control pad and its joystick. The control pad was a bad fit from the beginning, with its limited range of motion. On the other hand, the joystick felt loose and made traversing those narrow paths even more nerve-wracking. Apparently so nerve-wracking that I wound up breaking off the pad on top of the joystick while trying to manipulate the thing. Man, throwing the system AND snapping off its joystick's pad -- this game was bad for my poor 3DS' health! 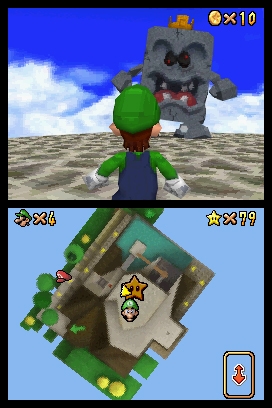 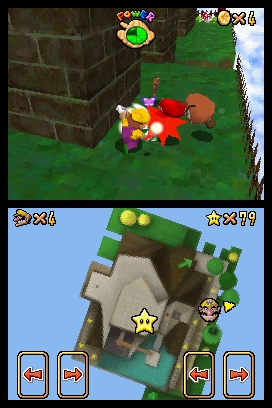 In short, my enjoyment of this game was solely determined by what sort of level I was in during any given time. If a world had a lot of open space and its challenges were derived more from exploration than platforming and reflexes, I had a really good time. This is a Super Mario game, after all. It was charming, imaginatively designed and had a variety of things to do. Bob-Omb Battlefield was a great introductory stage, easing me into the game and giving me a taste of the challenges in store. Water stages such as Jolly Roger Bay and Wet-Dry World tended to be enjoyable and relaxing. All you'd have to do to regain any lost health would be to float on the water's surface. Since you weren't underwater, your oxygen stores would replenish and since that also was your life meter, it'd be restored, too! And I loved some of the creativity on display. Tick Tock Clock has all sorts of mechanisms that might move quickly, slowly or not at all depending on the position of the clock's hands when you enter it, while Tiny-Huge Island is a two-sided world where you'll either be a giant in a tiny land or find yourself dwarfed by most everything.

I liked a good amount of this game's content and had many enjoyable sessions with it as a result. Other days, I'd be on the verge of throwing a tantrum for large portions of my playing time because I'd be struggling with the camera or controls, make a misstep and find my character sliding off the surface he'd been on and falling to his demise. While there were some worlds I loved playing through to the degree that I didn't leave them until I'd collected most, if not all, of their stars; there were others that I entered, fiddled with for a few minutes and left, never to return.

The end result? A game that had me captivated at times, but frustrated and annoyed with at others. I often could tell just why this game is so highly regarded, but would just as often find myself frustrated, which made playing it an inconsistent experience where I either was loving or utterly despising it with hardly any middle ground to be found. I might be able to recommend Super Mario 64 based on my experiences, but there's no way I'm recommending this port.
2.5/5

If you enjoyed this Super Mario 64 DS review, you're encouraged to discuss it with the author and with other members of the site's community. If you don't already have an HonestGamers account, you can sign up for one in a snap. Thank you for reading!

© 1998-2021 HonestGamers
None of the material contained within this site may be reproduced in any conceivable fashion without permission from the author(s) of said material. This site is not sponsored or endorsed by Nintendo, Sega, Sony, Microsoft, or any other such party. Super Mario 64 DS is a registered trademark of its copyright holder. This site makes no claim to Super Mario 64 DS, its characters, screenshots, artwork, music, or any intellectual property contained within. Opinions expressed on this site do not necessarily represent the opinion of site staff or sponsors. Staff and freelance reviews are typically written based on time spent with a retail review copy or review key for the game that is provided by its publisher.