When I left Geralt of Rivia at the end of CD Red Projekt's first Witcher game, he'd recently dispatched an assassin attempting to dispose of King Foltest of Temeria. Not just any assassin, but one whose features showed the telltale signs of also being a Witcher. All in all, a pretty good moment for the hero of this trilogy of games. Not only did he have Foltest's gratitude for spending the bulk of the game solving problems in and around the Temerian city of Vizima, but he just saved the monarch's life. And what could be better than having one of the most powerful men in the world viewing you as his personal savior?

Turns out, quite a lot. As a Witcher, in theory, Geralt's life is pretty simple. He goes from one place to the next, slays monsters for coin, indulges the fantasies of one woman after the next and has his personal bard, Dandelion, compose epic after epic detailing his every feat. As the guy whom a king trusts with his lifewell, he basically exists in a gilded cage. While he has long-time consort Triss, a powerful sorceress, by his side and in his bed, he also is kept on retainer by Foltest. And, as he ruefully admits, when a powerful king calls, he has little choice but to come.

And so, The Witcher 2: Assassins of Kings begins with Geralt helping Foltest take custody of children who may have been illegitimately produced by him in order to prevent lesser nobles from using them for political gain. Everything goes quite swimmingly until Foltest reaches his children; at which point the hefty monk watching over them promptly kills the king right in front of Geralt's shocked gaze. Fortunately for the Witcher, his stay at the local dungeon in the grasp of guards eager to display their prowess with fisticuffs on a bound man incapable of fighting back isn't long. Vernon Roche, head of Temeria's secret police might be hot-headed, violent and not above cold-blooded torture, but he's also willing to listen to Geralt's tale and, if not completely believe it, at least indulge it. The prologue ends with Geralt, Triss and Roche's team heading to the remote town of Flotsam for clues pertaining to the true assassin.

And this guy is immediately portrayed as a formidable opponent, especially if you purchased the Enhanced Edition of this game, which opens with a kick-ass bit of cinema showing him storming another king's party ship to effortlessly kill everyone on board, including the unfortunate monarch. If you're still not convinced after watching that or helplessly observing him dispatch Foltest, just wait until you confront him late in the game's first chapter. He'll freely use many of the same Witcher signs (aka: spells) that you have access to, making him a bear to fight up close or from a distance. The dude is a major roadblock keeping you away from much of the game and you'll have to get pretty damn good at controlling Geralt to have a chance of driving him off and getting the plot moving again. 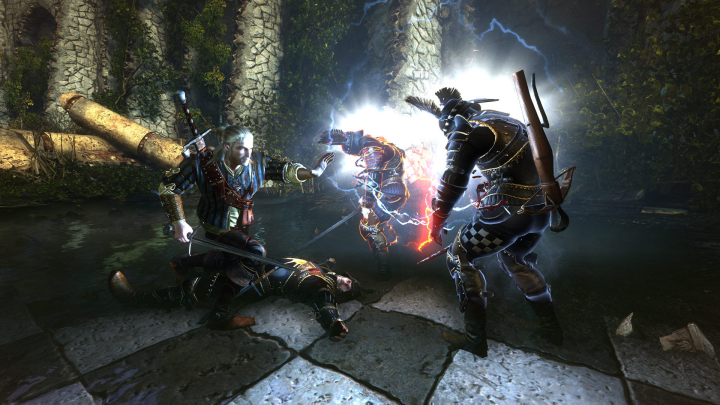 Then again, that can be said about several fights during the early going. Assassins of Kings has perhaps the most bizarre difficulty curve I've ever experienced. As the game begins, you'll have the blah weaponry and armor that you'd expect to possess at the beginning of an action-RPG, even if having shoddy equipment doesn't quite mesh with being the king's favorite problem-solver. You'll also be a bit lacking in attack-enhancing items, as well as potions, and you'll need to start collecting herbs and other items to make more. Your life bar will be somewhat lacking, so enemies are capable of cutting off large chunks of it with one hit. Making that problem worse is that, while you slowly regenerate health while not fighting, you'll only be able to do so in battles if you had the foresight to chug the appropriate potion beforehand. And let's be real, the regeneration provided by said potion works too slowly to really be of that much use, unless you're skilled at running away and avoiding attacks long enough for its effects to have a tangible impact.

Meanwhile, enemies tend to gang up on you with a relentless assault. Early on, simply fighting three guys in a fairly enclosed area amounts to being a luck-based mission. And may the deity of your choice save you if any of these guys are anything other than generic infantry. Guys with shields are capable of blocking attacks, while a heavily-armored dude hoisting a two-handed sword not only can tank blows, but can knock Geralt off his feet with one sweeping swing of his blade. I died in the prologue. i died a lot. To the degree where I started to wonder if, when I woke up that morning, all my gaming skill accumulated over multiple decades had eroded into nothingness.

And I continued to die throughout the first chapter. Not so much against weaker humans and monsters, but quite frequently against anything not so mundane. One side quest had me destroying the egg sacs of large insects named Endrega. Their basic versions of them, found frequently throughout the forest surrounding Flotsam, were trivial to dispatch. However, after destroying all the eggs in an area, an Endrega Queen would spawn. And I would die, often before even putting a dent into its health. For a few days, this game was an episode in frustration. I'd walk around and kill weak foes with ease and then run into something vaguely imposing and quickly see Geralt's body slump to the ground, mortally wounded.

However, as I reached the second and third chapters, there only seemed to be brief moments where I found myself challenged and having to continue from the Game Over screen. I'd love to say this was solely because I got the hang of things and found very little capable of still testing me. And to support this, as time went on, I did get better at battling. Rolling away from attacks like it was Dark Souls all over again, using oils on my sword of choice to enhance its attack and being smart with sign usage in order to deflect blows, temporarily paralyze foes or knock them off balance all helped me. 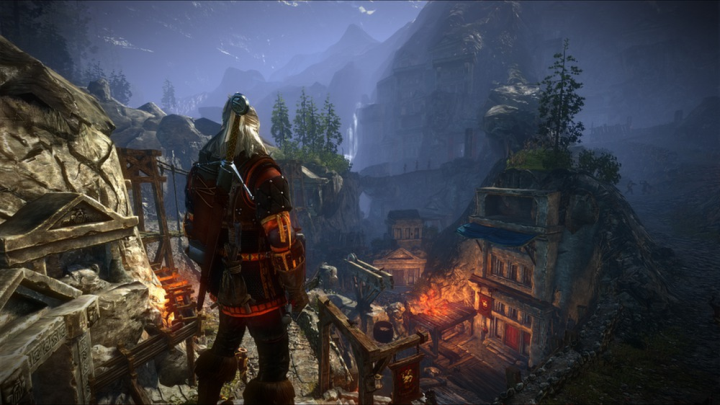 But what helped the most was simply gaining levels. Each level attained allows you to unlock or enhance some aspect of Geralt -- his physical prowess, his sign usage or his alchemy. I focused on the physical side of things and was able to greatly boost his health, make enemy attacks cause less damage and obtain all sorts of other boosts that turned previously tough foes into trivial stepping stones. Finding superior armor transformed deadly swordsmen into annoying gnats and my improved weapons cut through them so quickly they had scant opportunity to assault me. As a result, a game that started out soul-crushingly difficult gradually became easier and easier until I was able to run through most everything, with only a scattered handful of confrontations providing the sort of challenge that virtually every fight threw at me in beginning. It's funny. When I started out, I had to use all of Geralt's tricks just to keep my head above water. Then, when I was approaching the end of the game, I'd entered complacent gaming syndrome where I mainly just used heavy sword attacks, occasionally whipping out a sign if things got a bit hairy.

A backwards difficulty curve wasn't the only issue I had with Assassins of Kings. This is the shortest of the three games in the series, with its length artificially inflated by having a branching path you can take late in the first chapter where you can stick with Roche or side with elven rebel Iorvath. Whichever one you pick determines which side of the conflict which fills the second chapter you'll be helping, while also giving you a handful of different quests in the third and final one. While I didn't keep track of time, I'd be surprised if it took me more than 40 hours to clear one path through the game, and that's considering I did the vast majority of the game's side quests. Each chapter places you in a fairly small region that doesn't give you much terrain to explore, which gave me the impression I was being rushed through the game. Find the side quests and do them; find the main quest objectives and do them; go to the next chapter and do it all over again. Virtually anything worth doing will be done if you follow the path.

When I play a game of this sort, I want to be engrossed by the entire experience. I want a vibrant world with lots to see and do. Instead, what I got was an average game attached to a story so engrossing that I was hooked to the degree I kind of feel bad about bringing up all the ways I felt puzzled or let down. This series takes place in a world governed by shades of black and grey. Do you side with the ruthlessly pragmatic king or the conniving, manipulative sorceress? Is that assassin you've been chasing really a bad guy or is he just trying to do what he can to preserve what is dear to him in the manner he knows best? You'll have to make a lot of choices in this game and some of them can be "put down the controller and ponder things for a couple minutes" tough. And most games don't have that effect upon me, no matter how much I love them and their worlds.

That prevents me from being too hard on Assassins of Kings just because its action was pretty run-of-the-mill and generic or because it contained most of its difficulty in its early phases when I was simply trying to get used to the combat system and not expecting random assortments of nameless knights to butcher me repeatedly. I might have been frustrated at the difficulty at times and bored with how easy it was at other times, but I needed to see what would happen next. What choices I'd have to make. What consequences I'd have to face as a result of those choices. And as a result, I played through both paths in order to see and react to everything. For me to put that effort into a game this flawed, well, it must have done something right!

© 1998-2021 HonestGamers
None of the material contained within this site may be reproduced in any conceivable fashion without permission from the author(s) of said material. This site is not sponsored or endorsed by Nintendo, Sega, Sony, Microsoft, or any other such party. The Witcher 2: Assassins of Kings is a registered trademark of its copyright holder. This site makes no claim to The Witcher 2: Assassins of Kings, its characters, screenshots, artwork, music, or any intellectual property contained within. Opinions expressed on this site do not necessarily represent the opinion of site staff or sponsors. Staff and freelance reviews are typically written based on time spent with a retail review copy or review key for the game that is provided by its publisher.