When I saw PictoQuest newly listed on the Nintendo eShop a few days ago, the game looked so thoroughly up my alley that I wouldn't have been surprised if someone told me it only came into existence after someone read my mind and turned what they found into a game. Picross? That's fun. RPGs? Those are great! A mix of the two would almost have to be awesome, right?

The game's plot is simple and nonsensical and not especially important, but here goes: the wizard Moonface has stolen the world's paintings and now you are on a quest (as one of two capable heroes) to retrieve them and put the foul spellcaster in his place. To accomplish that feat, you must wander the land, vanquishing monsters that guard the loot, meeting with a handful of NPCs and sometimes visiting a shop. 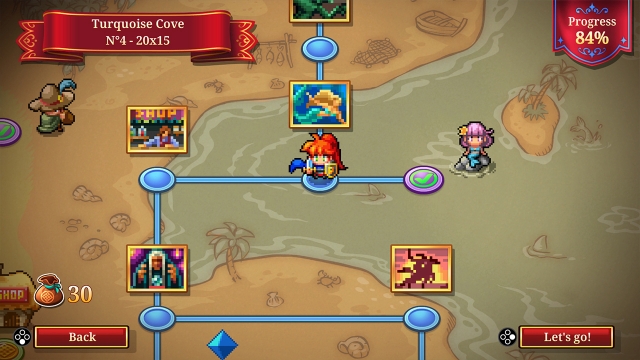 Gameplay consists mostly of picross puzzles, as you might suppose. If you've played picross in one of its many available forms, you know what to expect on that front: a grid consisting of up to 20x20 squares has numbers along its top and left sides. You will use those numbers to decide which squares should be flipped to produce a pixelated image. For instance, on a 5x5 grid, you might see text to the left of one row that says 1 3. That notation tells you to flip one tile on the far left side, leave a space, and then flip tiles 3, 4 and 5. You can also look at the vertical columns for clues, which you'll definitely need to do as the puzzles grow more complex. If you have a row of 20 tiles and know only that 3 of those tiles must be adjusted, that's not enough data until you eliminate a few uncertainties by figuring out what to do with other rows or columns.

I figure it's almost impossible to make picross sound exciting with text, even though sitting down to play it is almost immediately absorbing. I've played several incarnations over the years, and I always wind up having a blast. There are quite a few takes on the concept readily available on the eShop, and so a person might reasonably ask what makes this one more worthwhile than (or at least competitive with) the others. 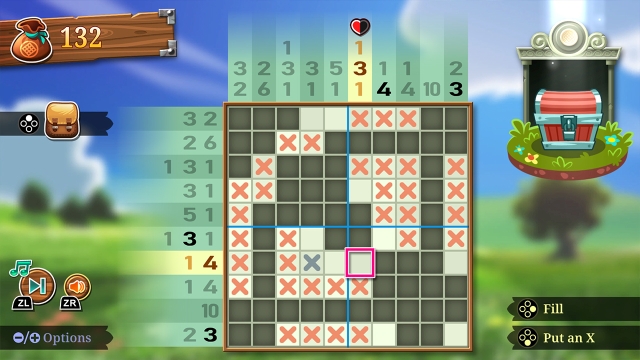 Basically, the RPG elements do that job. When you face off against a monster, you'll find it has an action meter that slowly fills. You need to completely solve a line or column in the grid before that meter fills or the villain will get to attack and you could lose a half-heart or more from your life meter. Flipping the wrong tile will typically produce the same effect, unless your character swiftly dodges out of the way... though of course you can't count on that occurring. The resulting sense of urgency keeps things tense. There was the possibility that the developers would go overboard and make things excessively difficult, but they didn't. Usually, you have just enough time for a little deduction, but not so much that you really can relax your guard.

Besides a life meter that allows you to make several errors without failing most puzzles, you can take advantage of special items. Some of them partially refill your life meter. Others reveal a few tiles you can flip (or that you should leave untouched). Even if you come to a stage with your satchel empty, you can sometimes grab an item by quickly solving a row or column when an item icon appears nearby. Those items can also be purchased or sold in the shops. Since the early puzzles are pretty easy, I tended to sell items rather than use them, which allowed me to more quickly invest in the costly life meter extensions. I didn't actually use most other items until the last leg of the journey. 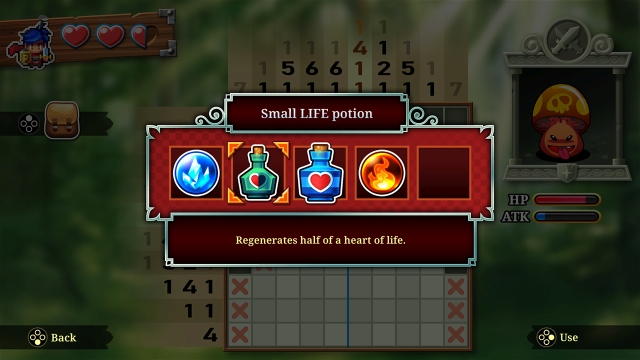 Tense battles aren't the game's only mode, though they are a common occurrence. There also are puzzles which tend to feature more complex layouts but don't rush you. Rather than draining your life meter, a wrong guess deducts some of your precious coins. Playing smartly without making mistakes will net you a nice reward. In other cases, you'll find characters around the map who present special challenges. One of them might ask you to solve a puzzle without making a single mistake, for instance. Another may increase the difficulty level or set a timer you have to beat. The variety of objectives keeps things quite engaging as the difficulty slowly ramps up and finally becomes quite demanding, shortly ahead of the end of your journey.

PictoQuest cleverly mixes light RPG elements with classic picross puzzles, not unlike the mix of Bejeweled and RPG elements that felt so refreshing a number of years ago when Puzzle Quest came on the scene. There's not much here that counts as character customization, and the plot barely even exists, but charming presentation and a gentle learning curve should rope puzzle fans in and keep them busy for a few enjoyable hours of puzzle solving. Whether you've never had the pleasure of playing a picross game, or you're a proper veteran, I recommend giving this one a shot the next time you're looking for something a little different on the eShop.
4/5

If you enjoyed this PictoQuest: The Cursed Grids review, you're encouraged to discuss it with the author and with other members of the site's community. If you don't already have an HonestGamers account, you can sign up for one in a snap. Thank you for reading!

© 1998-2021 HonestGamers
None of the material contained within this site may be reproduced in any conceivable fashion without permission from the author(s) of said material. This site is not sponsored or endorsed by Nintendo, Sega, Sony, Microsoft, or any other such party. PictoQuest: The Cursed Grids is a registered trademark of its copyright holder. This site makes no claim to PictoQuest: The Cursed Grids, its characters, screenshots, artwork, music, or any intellectual property contained within. Opinions expressed on this site do not necessarily represent the opinion of site staff or sponsors. Staff and freelance reviews are typically written based on time spent with a retail review copy or review key for the game that is provided by its publisher.