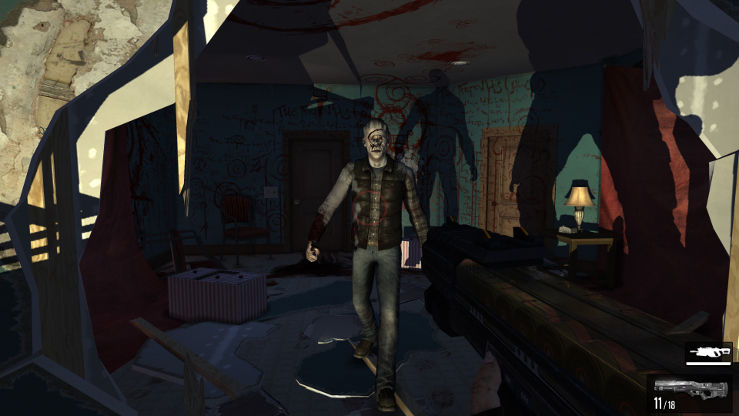 As a general rule, I write about games that have a profound effect on me. That profound effect does not necessarily have to be positive, nor is it exclusively negative. Sometimes, a game might just get under my skin for wholly unique reasons, or because it offers something I've not experienced before. In this case, FEAR 3 (or F3AR, as it insists I call it) has the unique trait of being the videogame equivalent of a pot noodle.

Ask anyone who ever tried one, and they will happily tell you that pot noodle is terrible, yet clearly there must be a market for them, because those little plastic cups of artificial flavouring, sweetcorn, and cheap noodles keep flying off shelves. I've never seen people buying them, yet they keep being purchased. Somehow. And in spite of them being so shamefully bad that people seem to buy them by stealth, I wholeheartedly admit that I like them.

Like pot noodle, F3AR is bad. It's not so bad that it'll hard crash your PS4, but ask around, and I'm sure you'll find no shortage of people to tell you how much of a pile of rubbish F3AR is. As with pot noodle, I would agree. With regards to story, F3AR is an utter mess: the well-plotted scares of the first game are almost completely gone, and are instead replaced with the occasional, obligatory boo! moment. Unlike the first two titles, all the juicy info in documents isnt there, and in its place is a series of wholly underwhelming cutscenes that only really serve to ferry the player from one environment to another. In practice, the cutscenes serve so little to the story that they could be replaced with text cards, and the story would be just as compelling. Which is to say, it wouldnt be compelling at all. The story itself is a complete pot of MSG-filled artificial trash, that boils down to Alma giving birth, and you having to race to get to her. Presumably, because the Pointman really wants to see the baby: I seriously couldn't tell you more than that. I stopped caring after the second mission and only checked back in when the mandatory apocalyptic skybeam showed up. 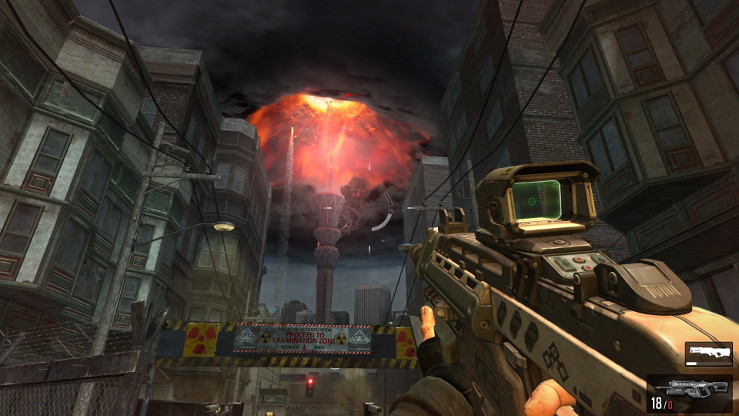 Graphically, F3AR is just as underwhelming. The original FEAR had a reputation for melting PCs down, back before Crysis arrived on the scene, but the tradeoff for that was FEAR still looks pretty nifty today. By way of comparison, F3AR looks like a dull and messy production no matter how many settings you throw at it, and it still tried to kill my graphics card. While things like fire and certain effects might have seen an improvement, the original still looks leagues sharper, and certain things like lighting might have been stripped back - even on the PC version. All told, F3AR is hardly a graphical masterpiece, so you might do just as well to put it on minimum settings and get those extra frames.

Even as far as gameplay is concerned, F3AR is a shell of what it once was. Frenetic gun battles in close quarters have been replaced with larger open arenas, filled with cheap mooks for you to mow down with your guns, interspersed with the occasional mech. Theres even a few varieties of enemies that just jump out at you and swarm you.

They are precisely as annoying as they sound.

Level and environment design in general also suffers, with the Pointman having to wade through waves of enemies in such terrifying environments as an airport (aint nuthin more terrifying than airline food, am I right?) and Costco. Next to the Armacham HQ in the original and the terrifying school in FEAR 2, barely any of the levels lend themselves to any kind of horror, and they dont offer all that much as a backdrop for a fight.

Its a sorry state of affairs on fronts both technical and artistic, but like a pot noodle, theres something there that - as terrible as it might be - I like. 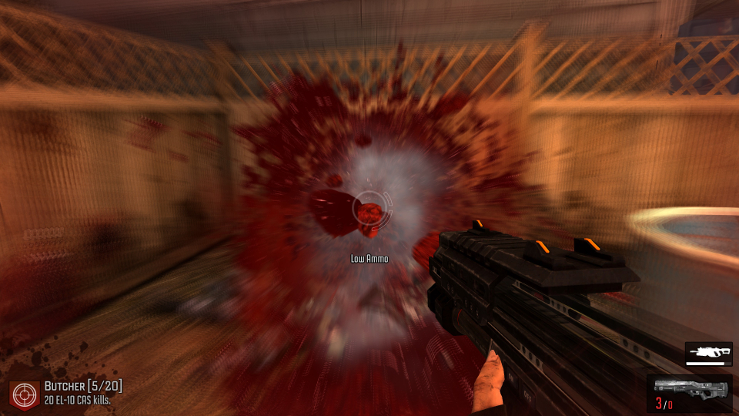 It may or may not be the bullet time mechanic.

To be fair, its not just the bullet time I like so much, but theres a few tweaks at play that make F3AR so much more fun to me as just a dumb shooter than its predecessors. As pointless as the co-op playstyle that the game was balanced around was, it likely necessitated some radical changes to the gameplay, resulting in the significantly dumber experience we ended up with. Whatever the cause, though, the result is that if you play it like DOOM, youll have a lot more fun.

In fact, I tested my hypothesis. I started the second level and played the DOOM soundtrack over it: lo and behold, I had a blast.
The gun designs in F3AR have been tweaked to look more intimidating, the sound design is about the same as it always was, and turning people into gibs with the shotgun in bullet time has never been more satisfying.

To be perfectly clear, this isnt what FEAR is about: FEAR should be a tense mix of horror and fast shooting, but if you can get past the departure from the series roots, F3AR offers some serious dumb fun. F3AR even encourages you to play more aggressively than in previous games by giving you a score for killing dudes in different ways, and the environments are designed to facilitate this kind of gameplay. There are even battle arenas where youre expected to face hordes of enemies in Serious Sam fashion. And yes, you can dual wield uzis. Sure, the earlier installments have the edge in all the right areas, but F3AR satisfies me on a primal level.

I like running round and shooting stuff until it explodes into viscera. I like it even more when Im doing it in bullet time.

I wish I could say I was above liking a game just for the fact you can blast people through the air in slow-mo, but F3AR scratches that base itch better than many other shooters on the market. Its just a shame its a FEAR game - and the last one, too - because with some more time in the oven and a rebrand, F3AR could have been a cracking shooter in its own right.

Now if youll excuse me, I have to blow up some goons in slow-mo.

© 1998-2021 HonestGamers
None of the material contained within this site may be reproduced in any conceivable fashion without permission from the author(s) of said material. This site is not sponsored or endorsed by Nintendo, Sega, Sony, Microsoft, or any other such party. F.3.A.R. is a registered trademark of its copyright holder. This site makes no claim to F.3.A.R., its characters, screenshots, artwork, music, or any intellectual property contained within. Opinions expressed on this site do not necessarily represent the opinion of site staff or sponsors. Staff and freelance reviews are typically written based on time spent with a retail review copy or review key for the game that is provided by its publisher.