Meet Yamada. He's a hero of sorts in Dandy Dungeon: Legend of Brave Yamada. Like most of us, he is trapped at a job he hates, barely making ends meet. One day, the slovenly 36-year-old programmer with no prospects decides to stay home and make a game of his own. He loses his job, of course, but he gains his freedom. That surplus of time allows him to sit in front of the computer all day every day, tweaking and expanding his passion project. Then disaster strikes: he falls in lust with his new neighbor, a beautiful young lady named Maria who does funny things to his heart simply by walking by the window. He knows that whatever else he does with his remaining time on this earth, he must convince the fair maiden he is worth her affection.

I'm not usually big on plot in video games, and Dandy Dungeon is a roguelike puzzle game where narrative should theoretically matter to me even less than normal. I found myself identifying with the protagonist, though, and I wanted to see him succeed in making a great game and in bettering himself along the way. His indomitable spirit, even in the face of ever increasing adversity, compelled me to endure the tedious grind made necessary by assorted issues that together serve as the game's only definite flaw. 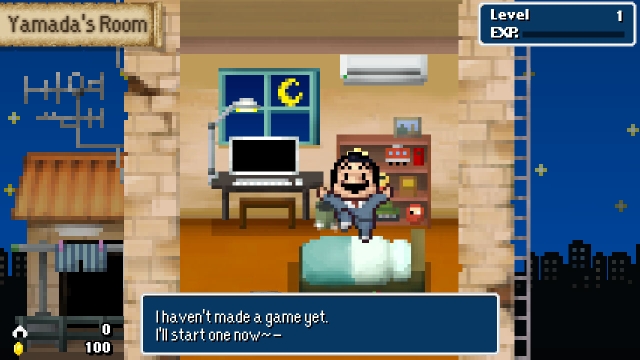 Strictly speaking, Dandy Dungeon isn't a game about Yamada. It is a game about play testing the man's evolving dungeon RPG. Yamada himself just stays in his studio apartment, usually dressed only in boxer shorts as he sits at his computer or dances on his bed. Sometimes visitors burst in through the front door, and he spares them as little attention as possible. Mostly, he just types on his keyboard or receives care packages in the mail from his mother. Whenever things go wrong, he finds a way to work his personal struggles into his art, and that's another new dungeon to put through its paces.

Fittingly, presentation is kept simple. The development team here in the real world consists of only a few talented individuals (who have worked on some great games dating back decades), so that makes sense. And Yamada himself is laboring as an individual, so of course nothing looks like it was developed by a committee with a huge budget at its disposal. In addition to the sparsely decorated apartment, there are dungeons with a few environmental themes, presented as grids with walls and barriers and objects and enemies that aren't well animated but certainly get the job done while exuding the sort of old school vibe I personally find so endearing. Audio assets are also extremely limited, with a lot of tunes sounding like they are hummed or voiced by Yamada. Some of the music--and even the title screen font--feels like it might almost have been lifted directly from the early Dragon Quest games, but there are just enough differences to evoke nostalgia without constituting IP theft.

Dungeon exploration is interesting. It employs a turn-based system similar to something you might have encountered in classic fare such as Torneko: The Last Hope or one of the Shiren games. The approach is popular within the genre, but here there is a twist: you can cross each space only once, and you need to map a route that allows you to tag as many of the available spaces as possible. A typical floor can be cleared 100% for a hefty bonus, while any blank tiles remaining when you reach the exit count against you and actually result in damage to your HP meter. There's a timer, as well. Once you make one move, you have to map your entire route within around 20 or 30 seconds, or else monsters start attacking you and you earn a lower ranking upon successfully completing that run. 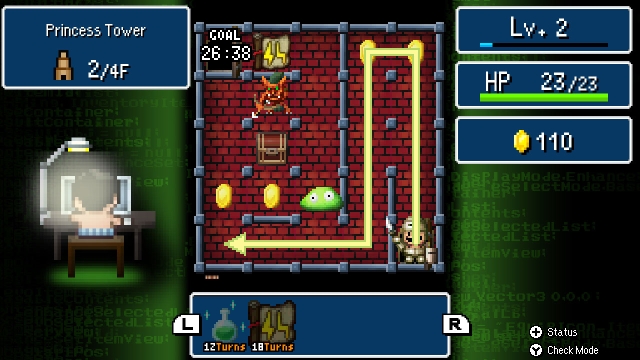 The push to start moving and to keep moving adds a lot of tension, and serves as a natural risk-and-reward system that makes Dandy Dungeon the surprisingly compelling beast it quickly becomes. Sometimes, you may encounter enemies you're better off avoiding, but can you live with the knowledge that you missed out on extra treasure by taking the (not entirely foolish) coward's route? Strategy plays a huge part in every move, even though you have to plan a bunch of those moves all at once. If you avoid too many enemies, you might reach the boss at the end without leveling up enough to survive said encounter, which tends to be difficult to circumvent. Along the way, you can pick up useful items, but they have cooling periods once used and virtually every item breaks once it has been used a few times. There's obvious pressure to conserve the most valuable resources.

So far, all good. But the game achieves some of its longevity (I played for dozens of hours) with a few unfortunate design decisions that I can sum up with two words: "balance issues."

Like dungeons in many rogue-likes, these ones are "randomly" generated. Layouts remain fairly consistent within a particular destination, because dungeon floors are so small, but treasure placement and the loot you actually find in chests varies. The components you need to fashion new armor and weaponry can be very rare indeed, and leveling up that gear so you can evolve it requires a lot of gold and treasure. You also gain bonuses if you assemble gear of a particular set, and so you might well find yourself spending several hours acquiring the perfect combination, only to discover that it becomes all but useless a few dungeons later. That means you are trapped in a not-always-interesting loop where you have to explore some dungeons repeatedly to acquire the rare drops that will let you tackle more challenging environments and continue the cycle as you advance toward your final destination. 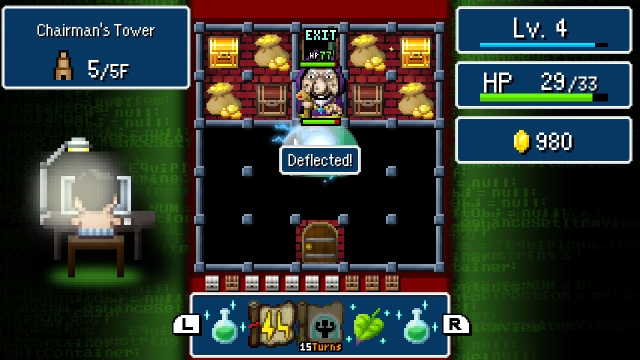 Going through a dungeon 20 or 30 times to get everything done grows tiresome, even though a run might only take 2 or 3 minutes (which at least is good for portable play, where this title excels). Worse, even basic dungeons can develop sharp teeth if the random number generator working behind the scenes gets frisky. The game is enormously fond of pitting you against weak foes that kill you because your attacks connect only sporadically. I have literally--and on multiple occasions--lost a battle to some of the weakest, most common enemies in the game because I attacked 20 consecutive times without scoring a hit that would have instantly vanquished the target (and no, that wasn't due to a status ailment being in play, though that can happen too). That's how heavily the odds sometimes are stacked against you.

Dandy Dungeon: Legend of Brave Yamada is a challenging, inventive roguelike with a lot of personality. Its basic veneer hides an addictive experience that is ideal for small bursts of play on road trips or as a way to fill odd moments in the day. Sadly, an otherwise terrific experience is sometimes punishing in the wrong ways. I do still recommend the game, especially to old school genre devotees. You'll definitely miss out on something special if you pass it by, but in that event, you also won't waste 20 turns trying to kill a foe the RNG has decided you can't even hit. Maybe Yamada can fix that issue the next time he does a little debugging...

If you enjoyed this Dandy Dungeon: Legend of Brave Yamada review, you're encouraged to discuss it with the author and with other members of the site's community. If you don't already have an HonestGamers account, you can sign up for one in a snap. Thank you for reading!

© 1998-2021 HonestGamers
None of the material contained within this site may be reproduced in any conceivable fashion without permission from the author(s) of said material. This site is not sponsored or endorsed by Nintendo, Sega, Sony, Microsoft, or any other such party. Dandy Dungeon: Legend of Brave Yamada is a registered trademark of its copyright holder. This site makes no claim to Dandy Dungeon: Legend of Brave Yamada, its characters, screenshots, artwork, music, or any intellectual property contained within. Opinions expressed on this site do not necessarily represent the opinion of site staff or sponsors. Staff and freelance reviews are typically written based on time spent with a retail review copy or review key for the game that is provided by its publisher.