As I've gotten older, I've found myself gravitating away from the traditional Japanese RPGs in order to dive headfirst into the Western RPG genre. While a large part of my reasoning involves a certain amount of fatigue with the myriad of tired tropes constantly found in the Japanese games, I do have to admit that I feel a certain kinship with the cynicism present in many Western titles.

Kings? Corrupt fools ruling due to birthright, as opposed to actual worthiness. Nobles? Craven bootlickers looking to align themselves with anyone willing to share power. Heroes? World-weary warriors whose main virtue is simply being better at the killing game than their opponents. Commoners? Who cares? If they don't have gold, they might as well not existunless one feels the urge to test the sharpness of their sword's blade. Sure, much like their Japanese counterparts, these games are loaded with magical spells and a veritable menagerie of fantastic beasts, but their worlds just feel more gritty, grimy and realistic.

The Witcher: Enhanced Edition is a prime example of that realism. While Geralt of Rivia can be played as heroically as a person desires, he'll always have cynical comments on the state of the world. A major city under martial law due to a plague. A village on the outskirts under the thumb of a religious fanatic. Nobles scheming while their king is absent. A mysterious cult flooding the streets with addictive drugs. Oh, and a civil war is brewing just in case none of that is enough potential misery. Humans treat dwarves and elves like trash due to how they're not human, so those demi-humans retaliate by robbing banks and taking control of hamlets, using their residents as leverage over the human armies.

For Geralt, those problems are secondary to the one he's out to rectify. As a Witcher -- someone who's been exposed to mutagenic potions to become a fearsome warrior at the expense of becoming sterile and being considered a freak by the general populace when they're not hitting him up to slay some monster for them -- he and his clan live in a dilapidated castle where they protect the secrets to their very essence. If you guess that The Witcher begins with those secrets being stolen, forcing the assorted Witchers out into the world to recover them and appropriately punish the thieves, well, you at least have some familiarity with this sort of fiction.

Geralt's path takes him to the city of Vizima. Eventually, as this is that plague-infested location that's under martial law. The gates are locked, so the first chapter of the game revolves around him running errands for the residents of the outskirts in order to get a pass granting admission. While there is some monster (and human) slaying to be done, odds are that you'll look at this as a pretty slow start to the proceedings, as you'll primarily be running in circles around the map, hitting up the same four or five locations repeatedly to advance the plot. After that, though, you'll have access to large districts inside the city, while a massive, monster-infested swamp is a mere boat ride away. Side quests will be plentiful and time will fly as you attempt to get closer to the thieves, uncover a big conspiracy and discover that remaining neutral in the face of the upcoming civil war is more than likely a pipe dream.

The success of The Witcher franchise is actually pretty amazing. Based on a series of Polish novels and stories, the first game was developed in 2007 by Polish company CD Projekt Red as their debut release. Since then, it's become a trilogy, with the most recent, Wild Hunt, being one of the highest-rated games of this generation. And, to be blunt, while you can see the potential for greatness in this game, you can also see the clumsiness of a new company trying to make a big game with an epic story attached. There are a few missteps present and, on a technical level, things can be a bit of a mess at times, leaving one with a game that's good, but nowhere near the "instant classic" status that Wild Hunt would get upon its release. 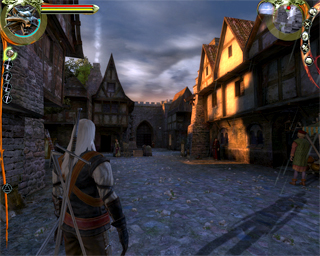 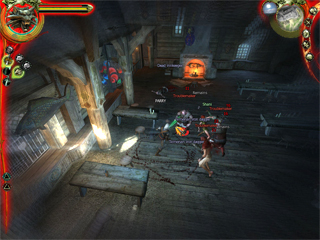 Battle is both complicated and simplistic. Witchers have two swords -- steel and silver -- with steel used to fight humans and silver for monsters. Each of those swords has three styles. Strong for large, strong foes; fast for nimble enemies and group for when you're surrounded. Geralt also can learn a handful of spells so he can set enemies on fire, knock them over to stun them or gain a protective shield. Oils and grindstones can be applied to weapons to temporarily enhance them, while bombs and potions can be crafted as long as you have the recipes and the necessary components for them. And then you encounter a monster and simply have to click on the proper weapon and style and then play a sort of rhythm game. Click on a monster, watch Geralt swing his sword and repeatedly click the mouse whenever the sword icon on the screen is surrounded by fire. Show competence at this and you'll be able to pull off lengthy combos, oftentimes disrupting your foe from doing much of anything.

Once you get the hang of things, you'll notice that this game plays out much like you'd expect. You gain experience for killing monsters and making progress in quests -- both story-related and optional ones. Upon gaining a level, you must visit a bonfire or certain friendly NPCs to meditate, allowing you to boost a handful of stats or abilities. The game is divided into multiple chapters, each with its own locations to explore. There even are a few nice touches, such as how most caves and crypts are inherently dark places, making it tough to find your way around unless you've taken the precaution to have a couple Cat potions on hand to give you improved night vision.

While a good game, The Witcher is too flawed to reach greatness. For reasons unknown, CD Projekt Red really went for the adult crowd and did so in the most hilariously crude way possible. As a rugged, manly dude, Geralt has no shortage of interested women and the minor detail that he can't impregnate them makes a one-night stand an even more desirable prospect. As a result, you have hordes of potential sexual encounters that often play out as quests in their own right, since you'll typically have to give prospective partners an appropriate gift or choose proper dialogue options to be successful. At which point you'll be rewarded with a portrait of the lucky lady, usually in the nude.

Don't get me wrong: I'm not here to clutch pearls while delivering over-the-top complaints about gratuitous fanservice or misogynistic designers. It's just that this feels like such a forced way to pretend this bit of swords-n-sorcery entertainment is more "mature" than others. It generally seems out of place and at times is a distraction from actual plot developments. Take one potential mid-game partner -- a princess whom Geralt had previously freed from a curse causing her to turn into a bloodthirsty beast at night. You'll have dialogue with her that turns into sexy-time during which Geralt's medallion, which vibrates whenever in the presence of monsters, falls to the ground while vibrating wildly to let you know said curse might still be a factor. And as you're digesting that, her card pops up on the screen and *BOOM* full-frontal nudity, peeps!

Heh, that stuff made me chuckle while shaking my head at the foolishness of it all. Other aspects of this game, mostly technical in nature, might have made me shake my head, but the chuckling was replaced with profanities. This game doesn't write over auto-saves, so you have to regularly delete old files to not run out of space. The game is fond of awkwardly transitioning into cutscenes immediately after the battles that trigger them, so you'll be fighting enemies and then find yourself, to your confusion, looking at pictures while Geralt is delivering a monologue on what just happened with no transition between the two. Whenever the game tries to branch out and do something other than standard battling, things seem to falter. In particular, the end of the third chapter, where you must run away from a large, lethal and near-invulnerable creature while using your Aard spell to knock down supports and bury it alive proved to be amazingly tricky. I died several times and when I finally succeeded, I had no legitimate idea exactly what I'd done differently to wind up victorious.

There's also a potential game-breaking crash in the fifth chapter. Early in it, you have to visit a hospital where, in quick succession, you have brief conversations with Zoltan the friendly dwarf, Shani the potential love interest and a random guard who points you in the right direction for your current quest. That guard sometimes doesn't trigger, so when the screen fades to black after talking to Shani, it remains that way, with you unable to do anything but listen to ambient sounds until you force-quit and reload. It took four or five tries to finally get that scene to work properly, by which point I was very close to throwing in the towel on this game.

But that scene finally did properly load and I was able to continue playing up to the end. While The Witcher was clunky at times and contained its share of questionable decisions, it was a fun game that drew me into its seedy and violent world to the degree that I made the impromptu decision to focus some of my near-future gaming time into progressing through the other two games in the trilogy. Possessing a world that constantly puts the ugly nature of humanity on display and giving players a hero (or anti-hero) capable of cutting wide swathes through that ugliness in an attempt to at least provide some semblance of justice for at least a few lucky people is a formula that works for me and this game pulls that off well.

© 1998-2021 HonestGamers
None of the material contained within this site may be reproduced in any conceivable fashion without permission from the author(s) of said material. This site is not sponsored or endorsed by Nintendo, Sega, Sony, Microsoft, or any other such party. The Witcher is a registered trademark of its copyright holder. This site makes no claim to The Witcher, its characters, screenshots, artwork, music, or any intellectual property contained within. Opinions expressed on this site do not necessarily represent the opinion of site staff or sponsors. Staff and freelance reviews are typically written based on time spent with a retail review copy or review key for the game that is provided by its publisher.