History 2048 makes me feel like a hypocrite, because over the years I've complained about tutorials quite a bit. There's an art to doing them properly, so that they impart any essential basic knowledge while leaving players to discover the more complex nuances and techniques for themselves. Tutorials should also be as brief as possible, so that anyone who might not need them can get right to the action. It's the rare developer indeed who manages to get this balance just right, and I often find myself wishing no one had even tried.

Sometimes, though, games do need to impart at least a little bit of information up front. The developers responsible for History 2048 seem to have forgotten that point. There is no tutorial offered at all, and what's more, there isn't even a title screen. You turn on the game, a black screen displays the standard Nintendo Switch logo text... and then you start playing. Immediately. Without even knowing what you're doing. 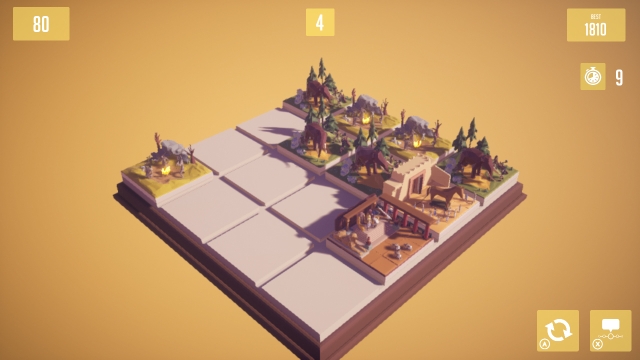 The design, aside from the lack of a title screen and proper interface, is for the most part intuitive. I was grateful for that much. All you do is tilt a board so that blocks shaped like various carvings slide around in the available 4x4 grid. If two of the same type of block collide, they will combine to form one of a more advanced piece. You earn points for each collision or set of collisions, but your primary goal isn't to achieve a high score. Instead, you want to advance through 15 periods of history by combining pieces to form increasingly advanced shapes that represent your progression.

Once I realized what was actually happening, it was like a switch flipped in my head. The game's design went from mysterious to vaguely satisfying. You start out with just a couple of pieces in play, and each tilt of the board constitutes a turn. At the start of a given turn, one new block falls onto the board, so that you always have fodder for new matches. You also need to make sure you think about each tilt carefully, as the game ends when you reach a point where you can't make any combinations and the grid is full. 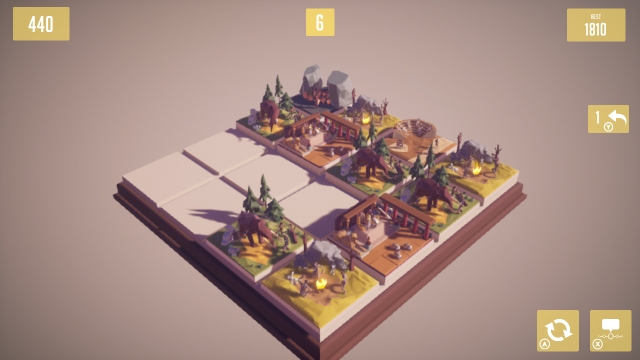 A certain degree of cleverness is mandatory, because the further you advance into the campaign, the more difficult it is to meet the requirements to produce two of the more advanced blocks that you need to fashion to create a high-level match. Unless you plan carefully, usually a few moves ahead, it's all too easy to put yourself in a position where you have a whole bunch of rubbish between the two pieces you want to merge. Then you have to make some careful moves to clear the space, which is difficult if pieces representing compatible periods aren't positioned properly. At higher levels, you're constantly forced to think not only in terms of what will produce the most desired pieces, but also what will leave you with enough room to move everything about so you don't find yourself in a sticky situation.

Fortunately, there is an "undo" move that you can access by tapping the icon on the screen or pressing the button indicated on your controller. However, you can't just utilize it whenever you like. There's a cooling period, no doubt implemented to encourage you to play without relying on the ability to erase a mistake. But this restriction feels unnecessary to me, because undoing moves only takes you back so far... and it's probably not far enough back to repair a stupid series of tilts. 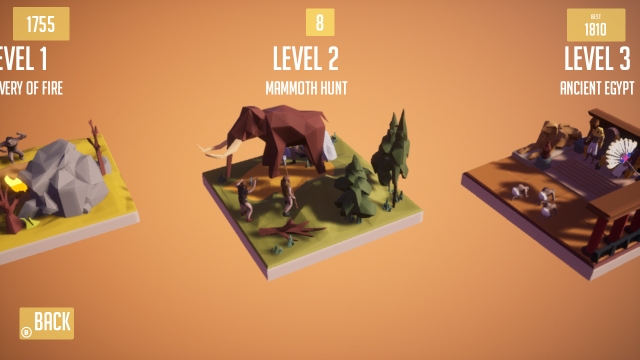 As I grew comfortable with History 2048 and its minimalism, I realized I had only two real complaints. The first was that sometimes I would be playing and press the analog stick in a particular direction to tilt the board, but my input would register as if I had tilted it in a different one. This can have disastrous consequences, and there's sadly no option to use the d-pad. A more precise input method might have helped to avoid this issue, but as things are, I recommend playing in handheld mode for a smoother experience using finger swipes. My other gripe is that the game doesn't let you play subsequent games from a later stage, rather than starting off in the very first level every time. Starting from scratch after making great headway can't help but feel the slightest bit disappointing, and it encourages a player to rush subsequent attempts in ways that may also prompt silly errors. It also highlights the fact that the general design is quite repetitive. It's really just an endurance run, and there's not even a leaderboard so you can show off how amazing you are compared to any friends who might own the title. Instead, you can see a record of the highest level you've unlocked. It's just not the same.

History 2048 cuts a lot of corners, but it manages to provide a reasonably unique puzzle experience in spite of that. Although there's not a lot of depth, I can imagine the game doing a good job of keeping folks entertained during regular short bursts of play while they're stranded in a waiting room with their Switch, or perhaps using public transportation. If you are happy with its asking price on the eShop or if you manage to buy it during a good promotion, you shouldn't have any regrets if you decide to give the game a shot. Just don't go in expecting a lot of polish around the edges.

If you enjoyed this History 2048 review, you're encouraged to discuss it with the author and with other members of the site's community. If you don't already have an HonestGamers account, you can sign up for one in a snap. Thank you for reading!

© 1998-2021 HonestGamers
None of the material contained within this site may be reproduced in any conceivable fashion without permission from the author(s) of said material. This site is not sponsored or endorsed by Nintendo, Sega, Sony, Microsoft, or any other such party. History 2048 is a registered trademark of its copyright holder. This site makes no claim to History 2048, its characters, screenshots, artwork, music, or any intellectual property contained within. Opinions expressed on this site do not necessarily represent the opinion of site staff or sponsors. Staff and freelance reviews are typically written based on time spent with a retail review copy or review key for the game that is provided by its publisher.