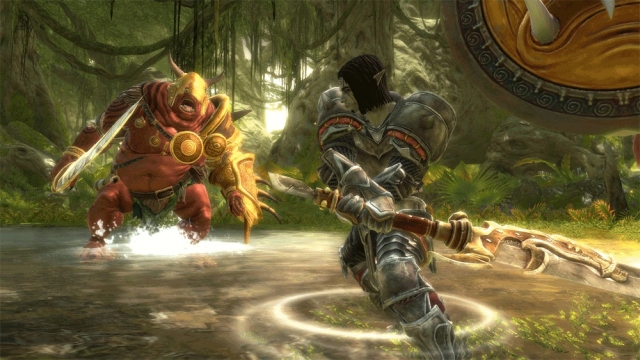 Before playing Kingdoms of Amalur: Reckoning, I'd heard one thing about that 2012 game: that it was often referred to as "Skyrim-lite". And, to be honest, that was probably the main reason I purchased it. After all, if I loved Skyrim so much that I went through it twice, racking up roughly 500 hours in its expansive world, it doesn't exactly require a leap of faith to deduce I'd at least have a fair amount of fun playing its "lite" version.

And that's exactly what happened. I came, I saw, I conquered and had a generally good time doing so, although I have to admit feeling a certain amount of fatigue as I was finishing the game and dutifully playing through its decent, yet unnecessary, DLC campaigns. It wasn't as immersive as Skyrim, but it was a pretty game that at least connected the dots well enough to provide the sort of experience where I could come home from work and lose myself in it for a few hours on a regular basis. Considering all the turmoil surrounding this game, that might be all I realistically could have asked for.

After retiring from baseball, Curt Schilling decided to take his love of MMORPGs to the next level by publishing his own  a project that, after a few twists and turns, eventually became a regular single-player Western RPG set in Schilling's Amalur universe. There was a lot of talent on hand, with R.A. Salvatore in charge of Amalur's lore and Todd McFarlane handling artwork. Alas, this also was quite the expensive project  so costly that even though it reviewed and sold well, it still didn't come close to breaking even, which pretty much put an end to Schilling's 38 Studios company.

So, what did 38 Studios come up with before bankruptcy closed its doors? A pretty good game set in a very large world that is loaded with all sorts of quests, both epic and mundane. You start out as a former corpse who was just revived by a gnome scientist in his hidden laboratory located in the farthest reaches of the most peaceful kingdom of Amalur. Well, "hidden" might not be the best description of this lab, as your rebirth comes at about the same time that enemy soldiers launch an assault upon it, leaving you to battle through them in the obligatory tutorial dungeon. Escape and you'll run into an ally, Agarth the Fateweaver, who lets you know what's going on in the world.

One branch of the Fae, an old race living in begrudging harmony with humans, gnomes and whatever other non-hostile groups call Amalur their home, went rogue. Declaring allegiance to a mysterious god-like being, these Tuatha basically took over the Winter Fae and have declared war on the world in general. While they might not possess the numbers that other factions have, they do have the minor advantage of essentially being immortal. Kill them and they simply rise from the dead. While humanity is putting up a good fight, that's the sort of handicap that means Tuatha victory is a foregone conclusion  it's just a matter of time before the resistance crumbles against opponents they cannot actually vanquish. 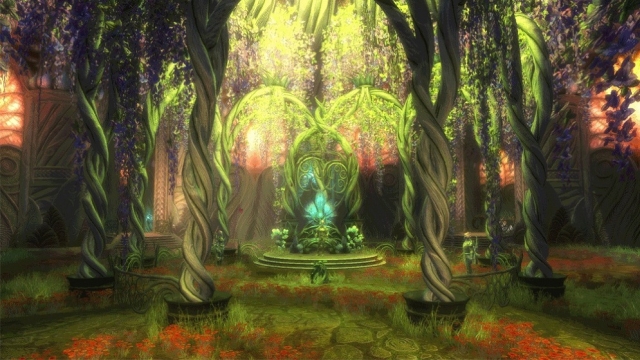 That's where you come in. Amalur exists under the law of fate. If something is foretold, it WILL happen and everyone has their own set-in-stone fate that can't be altered. However, since your character beat death, he (or she) operates outside the boundaries of fate. You can save the lives of people destined to die. You can write new endings to previously unchangeable stories. And, yes, you can even kill immortal warriors.

And, of course, you must do all sorts of tasks for the residents of Amalur's five kingdoms along the way. Early on, you'll find yourself in a fairly populated area, littered with villages, camps and strongholds in a kingdom mostly free from Tuatha invaders. Travel east and you'll find plains loaded with refugees fleeing the war, a desolate desert primary used by the gnomes for mining purposes, a city under Tuatha siege and corpse-littered battlefields. In a nice touch, you never are confined to one style of play at any time, as when you gain levels, you simply put points into skills in any of three paths that correspond to fighter, mage and thief. This allows you to mix and match skills and turn your hero into your own creation. And if you don't like what you're becoming, you can talk any Fateweaver and re-arrange your skill points completely.

It was easy for me to get sucked into this game. The quests I received in the village I visited after escaping the lab gave me reasons to explore nearby forests and caves, leading me further into that first kingdom. By the time I'd fully explored it, I had plenty of quests leading me to the two adjoining kingdoms as I advanced slowly and methodically through Amalur's world. While I'm not going to say every single quest was a winner, as many of them were those annoying fetch quests that never truly end, the good ones were memorable. For example, in the desert you come across a destroyed village containing a handful of people who start a chain of quests culminating in you battling a big demon summoned by a death-worshiping cult. Or, early in the game, you'll likely visit a village surrounded by voracious, deadly spiders and have to undergo multiple quests to defeat the baddie controlling them.

Also, as you'd expect from any good "Skyrim-lite", there are multiple factions you may join to receive chains of quests culminating in you battling one powerful being or another. The best thing about these is how they're somewhat tied into the main plot. The main adversary of one faction is a wizard hoping to combat the Tuatha with evil demons, while another one is fighting for its very existence in the heart of Tuathan-controlled territory. Compared to Skyrim, where every faction had a stand-alone story completely divorced from the main plot, this was a nice improvement.

Sadly, that might be the only aspect of this game I'd say is truly superior to Skyrim. While both games are beautiful to look at, Amalur's world is a bit less interactive, with you controlling a character who will repeatedly get stymied by such horrors as a ledge two feet above where you're currently walking, forcing you to roam around until you find a path taking you there indirectly. While there are plenty of dungeons, caves and other places to explore, the vast majority of them are short and linear, often taking a mere five to 10 minutes to completely explore. It's often a good idea to look up information online, as there are a couple places where if you do something before specifically directed to, you won't be able to advance in that quest  a real bummer if we're talking a plot-mandatory one! By killing enemies, you fill a Fate meter, which can then be spent to enter Reckoning mode to slow down time and make your character super-powered. Nice and all, but it doesn't take long to fill up that meter and using it essentially turns most every enemy, including bosses, into mere formalities. 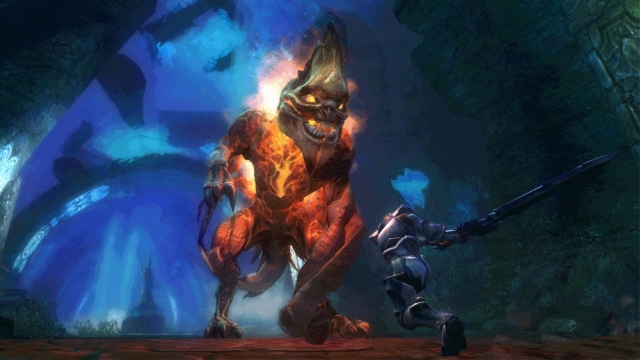 Really, this is a nice world that's fun to explore, but the combat does get tedious after a while. You have a decent assortment of weapons, both melee and ranged, but I quickly found myself sucked into complacent gaming syndrome and focusing on regular swords and, for stealth kills, faeblades. If something was dangerous enough to give me trouble and I didn't have enough fate to enter Reckoning mode, I'd use my shock spell because it had a decent chance of temporarily paralyzing foes. Early in the game, all of this was fun; but as time passed, I found myself getting over-powered because of two reasons.

Much like Borderlands, each area of the game has a level range for its enemies. If you're a thorough player who seeks out side quests, you'll eventually get to the point where you'll be of a noticeably higher level than the local monsters until you reach the level cap and are in the home stretch. Even taking that out of the equation, if you put any effort into building your character, you'll still easily outstrip the opposition. By diligently searching the world, you'll find Lorestones that tell stories about various people and events that have happened in Amalur. Find all of the stones in a set and you'll obtain some sort of passive bonus, allowing you to regenerate health or cause more damage against a certain type of enemy. And then there's Sagecrafting, where you can create gems to place in equipment slots to gain more bonuses. With sufficient time and effort, you can cause more damage with your attacks, while being able to regenerate health rapidly enough that your collection of healing potions start to collect dust.

And when things progress to a certain point, you'll start simply rushing through the game, completing quests, turning them in and rushing off to the next one. Enemies will be reduced to either annoying little speed bumps or annoying big guys who might be resistant to attacks and rarely get staggered, but are more boring than anything else because it takes a while to whittle them down and you're never in any actual danger.

Still, it took a while to get to that point and even when I felt it was time to wrap up my time with Kingdoms of Amalur, I was still regularly playing it for multiple hours at a time and finding myself in a "hack-slash-collect loot" comfort zone that kept me from ignoring side quests or abandoning this game before completing its DLC. While it's not as good as Skyrim and it probably would have limited appeal to anyone who wasn't in love with that game, as a person who loves games of this nature as long as they're reasonably well-made, I was able to get a fair amount of enjoyment before its appeal started fading. And since legitimately awesome Western action-RPGs don't come around every day, it's always smart to have a couple that are at least respectable in reserve for when the urge to play one gets too powerful to ignore.

If you enjoyed this Kingdoms of Amalur: Reckoning review, you're encouraged to discuss it with the author and with other members of the site's community. If you don't already have an HonestGamers account, you can sign up for one in a snap. Thank you for reading!