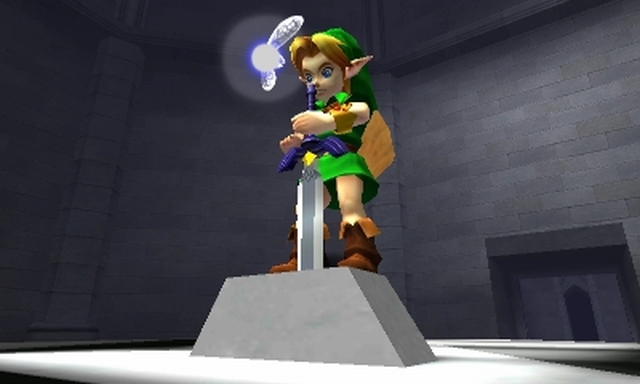 Thanks to a friend letting my borrow his Nintendo 64, I was able to play Ocarina of Time reasonably soon after it was released, but I only was able to go through it once or twice, as opposed to the myriad times I played the NES and SNES Legend of Zelda games.

That was a shame, since I've come to believe that after Ocarina of Time, it took an eternity for another Zelda game to truly reach greatness. Just to mention a couple titles that came later, Majora's Mask provided fewer dungeons, replacing them with scads of quests to perform for townspeople, while Twilight Princess was overly bloated with tedious tasks. In comparison, Ocarina is a mean, lean dungeon-exploring machine that's easy to get into and fun to play through. While playing Twilight Princess, I found myself feeling so nostalgic about this game it took virtually no time for me to break down and purchase its 3DS port.

Over the 18 or so years since I'd first played the game, I'd forgotten just how quickly things get rolling. After the introductory cutscenes, you'll find yourself in control of Link in his remote forest village. In Twilight Princess, before entering the first dungeon, you had to endure seemingly endless tutorials and sub-quests, ranging from learning how to use various weapons to fishing to herding livestock to controlling Link in wolf form to forgetting where you were going in the first place. Here, the process is far more streamlined. You leave your house, find a sword and scrape together the necessary money to buy a shield from the local shop. After that, you're allowed into the Great Deku Tree to start your first dungeon. Eliminating loads of filler and letting players immediately feel they're making progress is a GOOD idea! Who would have guessed?

While there are plenty of activities Link can partake in throughout the world, the majority of them are optional. If you're good enough to not need to hunt down virtually every heart piece to maximize your health or collect the majority of the Skulltula tokens for the prizes they bestow, you can pretty much progress from one dungeon to the next, only needing to deal with a short quest here or a detour there. It'sbeautiful.

After finishing that first dungeon, Link will be unleashed on the world outside of his forest village. He'll find himself on a quest to collect three doodads (of which he obtained the first in the Deku Tree) -- a process which leads to Ganondorf coming into power and Link being placed into stasis for seven years. He emerges to find Ganondorf essentially rules the world, which has become much more menacing over the years. Fortunately, that time has matured the young hero and he'll now be able to wield a wider selection of weapons and items. You'll be able to equip armors that protect against extreme heat and being underwater for extended periods of time, as well as massive swords and other useful goods. 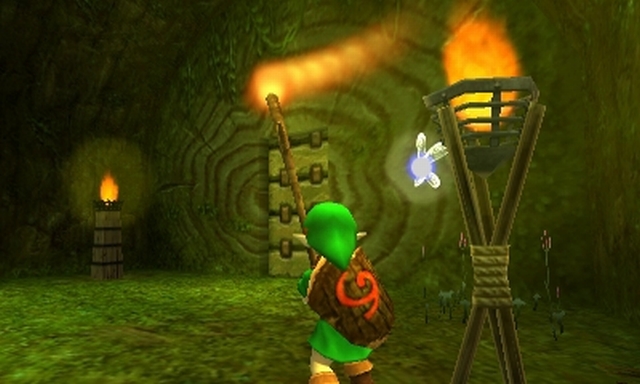 While Adult Link occasionally will have to put in some work to make it from one dungeon to the next, it never feels like padding tossed in to make the game take longer to complete. To get into the Water Temple, you'll have to get a particular item from an icy cavern. To make it to Adult Link's Spirit Temple, you'll undergo a short dungeon at the bottom of Kakariko Village's well as Young Link. To reach the Desert Temple, which requires both the young and adult versions of Link, you'll be forced to use both stealth and combat to sneak through a Gerudo fortress. Doing small dungeons to earn the necessary items and abilities to tackle the big ones? A great idea! Definitely far better than escorting wagons or hunting down massive swarms of Twilight bugs.

The best part: There is definitely far more to praise about this game than its refusal to waste players' times with tedious stuff that threatens to suck the enjoyment out of the dungeon-exploring. For one, there is a great sense of progression on display. You start out by going through a few short and simple dungeons to get into the swing of exploring a Zelda world that is portrayed in three dimensions, as opposed to the top-down 2-D worlds of the NES and NES. The Deku Tree only consists of a handful of rooms and hallways, while the next two aren't much more complex. When Link transforms into his older self, the kid gloves come off and you'll find yourself progressing through increasingly convoluted locales, each consisting of several floors and far more puzzles and challenges to overcome than those early-game dungeons.

The controls on the game are well-executed, as three-dimensional Link comes with an impressive move-set that includes rolls and jump attacks, as well as a lock-on button to keep foes in your line of sight. The sort of stuff that is quite commonplace today, but was pretty revolutionary in an industry that was making its first truly serious steps into three-dimensional games when this was originally released. The camera tends to be over Link's shoulder, but when utilizing projectile weapons such as his slingshot and bow, it'll shift to a first-person view to allow efficient aiming.

Perhaps just as importantly, this game captures a truly epic feel and, as a result, has a lot of memorable moments that will stick in a gamer's mind long after completion. Such as Link's first encounter with Ganondorf when, as a young lad, he comes across the hulking man chasing after Princess Zelda and her guardian on horseback, only to find himself unable to provide his adversary with anything more than a brief moment of amusement before resuming his hunt. Or how each boss has its own entrance, complete with subtitles by its name. Sure, once again, stuff like this is commonplace in games, but Ocarina of Time was, if not the first to include these touches, the first to truly put the package together. An orchestral soundtrack that crescendos at all the right times to add that additional note of "THIS IS IMPORTANT AND REALLY COOL!!!"; a bevy of quirky inhabitants to make the world seem just a little more vivid; a collection of fun mini-games ranging from fishing to target-shooting galleriesthis game seemingly had it all when I first played it and still is very enjoyable today. 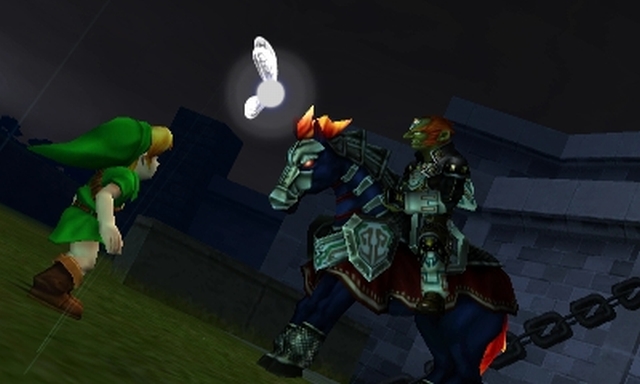 Really, about the only thing Ocarina of Time didn't have was a cool world to contain all its cool stuff. You'll find that virtually every pertinent location is located along its border, while with the exception of one large ranch, the main part of it is little more than a dull walk (or horseback ride) to get from one place to another. You might fight a monster here or find a Skulltula there, but for the most part, the game's world is just a hub that takes up space.

Now, there is a bit more to this review than me using a lot of words to essentially proclaim: "Man who loved classic game back in the daystill loves classic game!" This is a port to a more modern hand-held system, so the big question is whether the game maintains its awesomeness when moved to a smaller screen. In short, it does. The graphics have been smoothed over a bit to remove most of the "Ew, so primitive" vibe that so many of those older three-dimensional games have when compared to the prettier, more realized worlds of more modern adventures. As someone who vaguely remembers not particularly liking the Nintendo 64 controller, I found the 3DS controls to generally be good. Tilting the system in my hands to aim in the first-person view sometimes felt a bit awkward, but I'm not sure whether to use that as a criticism or just another reminder of how I have a habit of turning Luddite whenever confronted by any of those "outside the norm" aspects present on more modern Nintendo systems.

In that vein, I, as usual, quickly turned off the 3D slider because of how I never am able to hold my 3DS in that "sweet spot" where the effects come through flawlessly with any consistency. Somewhat surprisingly, I legitimately felt a bit of regret over this. The early-game cutscenes looked great in 3D, while Link's village felt more vibrant and alive than ever. With the 3DS, I've often felt that those 3D effects are used as afterthoughts, often making objects look like pop-up cut-outs, but here, it seemed like Ocarina of Time was legitimately re-worked to take full advantage of modern technology.

But the simple fact that one short cutscene is added after you've changed the water level in a particular room in the Water Temple, allowing you to see exactly where you should go at that moment instead of running out of keys and wandering that dungeon's halls aimlessly for hours (uh, not that such a thing ever happened to me), is more than enough to make up for me not getting the most out of the 3DS' technology. Also, taking your magical sets of boots on and off is far easier, as they're now considered items and can be programmed to buttons, so you don't have to enter a sub-screen to deal with them. Improvements like that are what I like in my remakes!

And as far as remakes go, this is one that's worth grabbing. It even includes the Master Quest that was added to the game when it was re-released on a GameCube compilation, allowing you to play through it again, but with different dungeon lay-outs and stronger foes that cause double damage. While Ocarina of Time 3D might not be an essential purchase for people still possessing a Nintendo 64, it definitely worked for me, allowing me to to reunite with a great game and enjoy its complex and challenging dungeons one more time, remembering just why The Legend of Zelda was THE video game series for me for such a long time.
4.5/5

© 1998-2021 HonestGamers
None of the material contained within this site may be reproduced in any conceivable fashion without permission from the author(s) of said material. This site is not sponsored or endorsed by Nintendo, Sega, Sony, Microsoft, or any other such party. The Legend of Zelda: Ocarina of Time 3D is a registered trademark of its copyright holder. This site makes no claim to The Legend of Zelda: Ocarina of Time 3D, its characters, screenshots, artwork, music, or any intellectual property contained within. Opinions expressed on this site do not necessarily represent the opinion of site staff or sponsors. Staff and freelance reviews are typically written based on time spent with a retail review copy or review key for the game that is provided by its publisher.