Trybit Logic is a logic-based puzzler from first-time developer HIMACS, which has players position cards in an open area to eliminate the bugs that have brazenly taken up occupancy. The game features very nearly 200 strategic challenges in its Puzzle mode, along with a more action-oriented Defense mode that relies on a lot of the same underlying logic. You'll currently find the title available exclusively on the Nintendo eShop with an MSRP of $6.99 USD, which feels fair to me even though for many it might nudge the product outside of what I consider "impulse buy" territory.

Both visually and aurally, Trybit Logic is a bit on the disappointing side. The retro-style visuals work well enough, as far as they go, but they're quite limited. There's just not a lot of flair, with the developers apparently settling instead for functionality. I would complain more, except I do like not having to squint to make out numbers or other gameplay elements the way I might have to if too many artists had been allowed to ambitiously contribute to the project. As for the music, I finally had to mute it. There's just one main song and it loops repeatedly, which might not be bad except the composition seems to consist mostly of four or five notes that sound like they were sampled from a Mega Man track and then just stuck on repeat without much in the way of variety beyond that. After a few hours, it can really grate on a person's nerves. 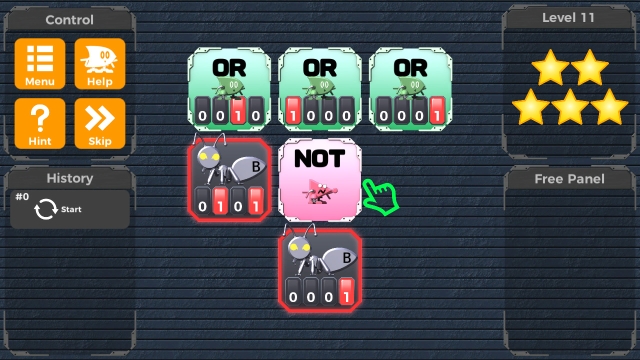 Fortunately, the "mute" button and a little patience reduce or eliminate issues with the presentation, leaving the player to contentedly dive into a generally enjoyable puzzle experience... albeit one that eventually can grow rather overwhelming.

As noted, your goal in the game is to clear the field of bugs. Your adversaries are represented by static characters that look to me like large black ants with malevolently glowing yellow eyes. They appear on cards also featuring four circuits with 0s and 1s to indicate whether each circuit is turned on or off, which is how 0 and 1 are used in programming languages. You change those numbers by placing cards of your own that include programming terms: And, Or, Xor and Not. Those cards each have four circuits of their own, some energized and some not. When you place them, they respond in ways that resemble coding interactions. A bug is eliminated if the various possible interactions turn every number on the card it occupies to 0 or to 1. When you eliminate every visible bug, you win the puzzle. If you run out of cards and possible moves, you must either start over or choose to resume from the point where you last made a move you feel good about. I do wish it were possible to press a button and conveniently cycle back through previous moves, rather than (or as an available alternative to) clicking on a list with numbers and representative icons, but I managed. 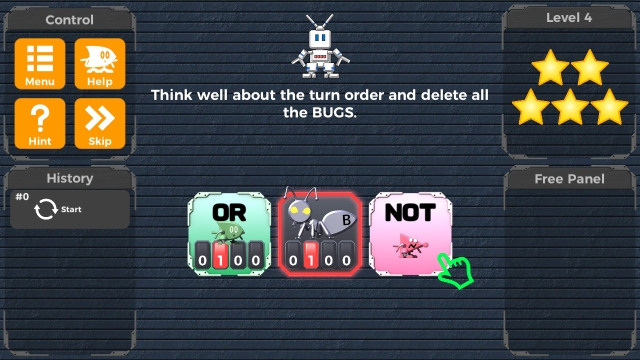 The cards you must manipulate aren't pulled from a deck. A round starts with most or all of your cards already laid face-up, along with those featuring the bugs. You can't move any of the bugs directly, but you can slide any of the other cards to an adjacent card above or below it, or to the left or right. Diagonal moves, as well as moves across gaps, are prohibited. This rule means you have to think carefully about the position of the cards and not just their effect, since sliding them around in the wrong order might leave an important resource marooned where you can't reach it. At the same time, though, a bug that is out of reach at first might be accessible if you get creative.

Further complicating matters are (particularly in the more advanced puzzles) cards that could have several potential values. You will see such cards presented with "?" icons, and then you have to place one of several possible cards in their place, depending on your needs. You might have three or four options for that single card, so you have to really think about what you want to do. Not every card available will need to be played, and not every card already on the field has any actual use other than to confound your efforts. In some cases, half of them might remain when you zap the last bug. In other cases, failing to use even a single one of them spells disaster. 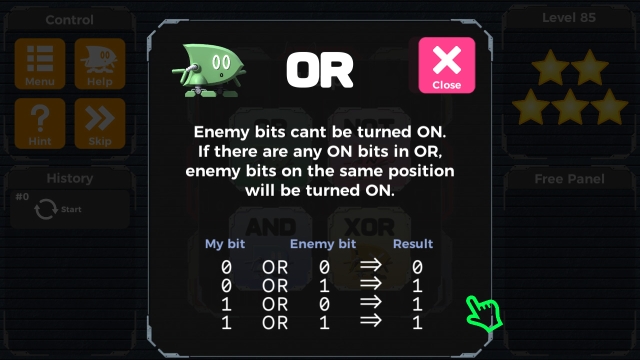 Trybit Logic does feature a "Hint" system, though I rarely used it myself. When you clear a stage, you can earn a rating of up to 5 stars. Each hint you access drops the rating by 1, but you can always just back out to the level selection screen after checking out your hint, then start over again and earn a perfect rating. I feel like that makes the whole "stars" system useless. Sure, you can earn in-game achievements for clearing enough stages without using hints, but you can also use hints regularly and accomplish the same thing with no one the wiser.

As you progress toward the later puzzles (though actually, it seems to be possible to play every one of them in whatever order suits you), the temptation to use hints grows stronger. Or at least, it did for me. That's because all the stuff you have to keep sorted in your head gets to be a bit much. There's a definite result you can count on when you mix each and every type of card. Rules will always apply in a predictable manner, given the factors at play, and yet keeping all of those rules sorted in one's mind ahead of every interaction becomes extremely difficult. If I were playing the game for a living, week in and week out, I think I would have little trouble committing everything to memory. Playing it on a more limited basis, I sometimes would just guess what might happen and swipe cards from one position to another, hoping for the best. My guesses definitely got better as I went, and I cleared some of the most advanced puzzles with little difficulty, but there were always a few that would come along and stump me for awhile. I suspect many players will have a similar experience. 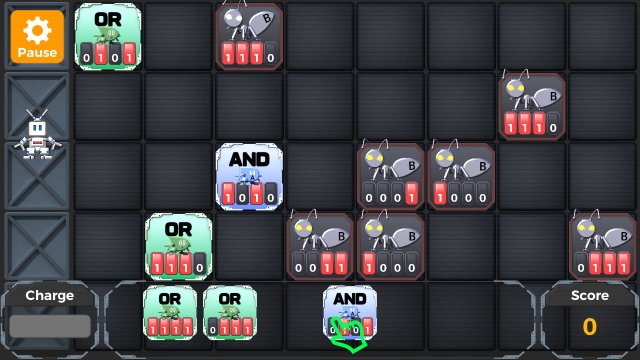 If you get sick of solving puzzles, the aforementioned Defense mode may be more to your liking. You have to protect a series of lanes from invading bugs that march from the right, sort of like zombies invading your garden in Plants vs. Zombies. You can toss out cards that will "solve" the cards the bugs occupy, eliminating them as a hazard, and you can set up chain combos and sometimes unleash special effects. The action picks up as it goes, and your performance here is ranked. However, it begins to feel like a bit much even a short time into a round, and I found that I much preferred the comparatively sedate Puzzle mode.

Trybit Logic isn't completely unique, despite boasting what seems like it would almost have to be an original gimmick. Various other indie games on the Switch marketplace, such as Human Resource Machine and Energy Balance, offer similar experiences or premises that should scratch the same sort of mental itch. Even so, it's nice to see different approaches to the genre, so that as players we're not stuck with nothing but stacking and match-3 puzzlers. If you're into puzzle games that require some actual thinking to clear, Trybit Logic has a lot to offer at a decent price point. And who doesn't like eliminating bugs?

If you enjoyed this Trybit Logic review, you're encouraged to discuss it with the author and with other members of the site's community. If you don't already have an HonestGamers account, you can sign up for one in a snap. Thank you for reading!

© 1998-2021 HonestGamers
None of the material contained within this site may be reproduced in any conceivable fashion without permission from the author(s) of said material. This site is not sponsored or endorsed by Nintendo, Sega, Sony, Microsoft, or any other such party. Trybit Logic is a registered trademark of its copyright holder. This site makes no claim to Trybit Logic, its characters, screenshots, artwork, music, or any intellectual property contained within. Opinions expressed on this site do not necessarily represent the opinion of site staff or sponsors. Staff and freelance reviews are typically written based on time spent with a retail review copy or review key for the game that is provided by its publisher.