Marenian Tavern Story: Patty and the Hungry God, a new JRPG from Ride On and Kemco, doesn't waste time putting together a cute premise and putting players to work. I like that quality, but did the storytelling have to be quite so clumsy?

As the story begins, a young lady and her much younger brother are walking home along the road with their loyal family butler. "How long have you been with our family, anyway?" asks the girl, Patty. "A long, long time," he responds. Their conversation is interrupted when the younger brother, nose in a book, walks into a statue and knocks it over even after his companions literally just warned him that he should watch where he is going. "Oh no!" says Patty. "You knocked over that statue!" Their attention is quickly distracted by the appearance of a fuzzy little animal, which may be a hamster or a rabbit or a stoat or something else. Anyway, it's hungry. So the young lad feeds it a cookie--against the butler's advice--and they all head home. 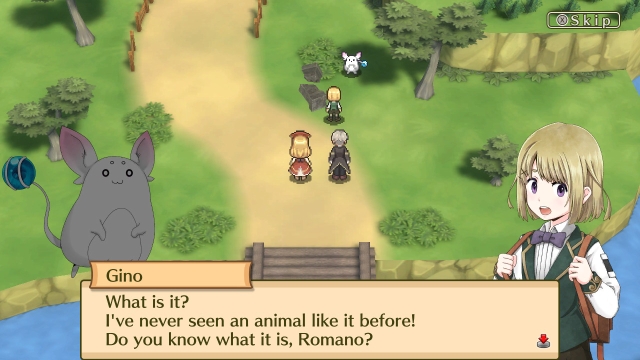 Back at their homestead, which is a luxurious manor, they invite the mayor over for dinner and happen to mention knocking over the statue. He is displeased. Something bad could happen, he warns. This is confirmed when they learn in the next instant that their lovely home and the esteemed family restaurant have been repossessed by a villainous sort of fellow with a cigar who claims everything is now owned by the bank. Patty, her brother and the butler all head to town, where they are given a new tavern to tend to as they try to delight customers and also feed the magical creature they awoke, which is apparently the God of Poverty and won't go away unless they feed him an absurd amount of food.

With the narrative out of the way, you're free to settle into the general flow of the game. I just wish Marenian Tavern Story spent the remainder of its duration worrying so much about keeping things moving, because that's not the case. Its various mechanics---which to their credit are interesting and do showcase some solid RPG design--often seem to have been crafted with the primary intent of impeding your progress so you can't rush through the campaign too quickly. I wound up investing dozens of hours in the effort by the time I beat the game, which feels like a bit more energy than is warranted when the experience essentially amounts to Atelier-lite.

Your adventure is divided into "days" that follow a set pattern. You wake up in the morning and decide which location to visit from the world map, which offers only a few options that grow more numerous as the tale progresses. You enter a dungeon and battle monsters in a twisting, winding labyrinth as you check harvest spots for goods you need. Or you roam a town and shop for wares you can't purchase at the establishment in your own little village. If you have a particular item in your inventory, you can use it to automatically forage in a dungeon you've already cleared for some quick additional supplies. Then it's time to return home, where you can do some last-minute shopping, fix some recipes, and finally open the tavern for business that day. Based on how exciting they find your menu options, customers come and eat. The money they pay funds your efforts the following day. 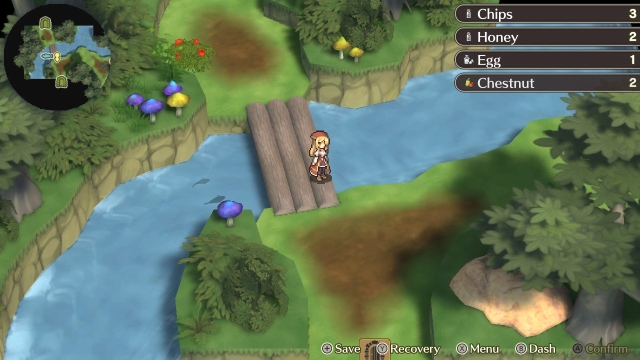 The above process repeats for the game's entire duration, with only the occasional complication. For instance, a friend tend fields and such on your behalf, or you pay a blacksmith to add orbs and strengthen weaker equipment. Most of this doesn't reward your efforts enough to justify the distraction, however.

As I noted, the game spends a lot of time figuring out how to delay your progress. It does have a story it wants to tell you in bits and pieces (usually around mealtime), so it wouldn't do for you to gather all of the finest ingredients and make all of the best dishes and just blaze through any other objectives provided. Earning a rank of 10 for your tavern, which is the overarching goal in the game, thus takes a lot of time. You can't directly visit more than one location from the world map in a given day, and can't auto-forage more than one additional site, so you can only acquire a few key ingredients or visit certain vendors in a single run. Shopkeepers run out of the best stuff and only slowly replenish it, so you must keep making different recipes with different items in order to continue generating revenue. A "week" consists of four days, and if you meet the objectives for a new rank on the first day of the week, you get to kill time for the next few days until the weekend arrives and your performance is again assessed. I really feel like that should have been a daily thing. 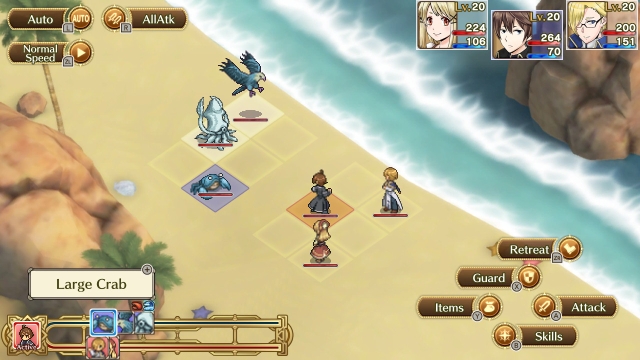 To the developers' credit, they do build effectively on the game's repetitive core. For instance, the character customization is decent. The equipment you choose for your heroes affects which skills they have available while facing off against enemy mobs. Battling enemies allows characters to gradually learn new skills, but they don't go up levels and gain the corresponding health and attributes in the usual manner. Instead, they improve by eating the various dishes you feed them, which are made using the same ingredients you might utilize when trying to please tavern patrons. So there's constant resource juggling required.

The best way I found to consistently progress was to regularly battle monsters for the ingredients they also drop. Combat is turn-based, but you can choose from a few "auto" options to speed things up as desired. Unfortunately, the various members of your crew are dumb as a box of rocks. Suppose they're facing a group of enemies and they've almost destroyed a bruiser who deals tremendous damage each turn. Sometimes, they'll go ahead and finish him off the next round as one might expect. They're just as likely to suddenly target some other foe, however, leaving the lethal guy in the mix to continue dealing damage. Similarly, they sometimes heal when warranted, making sure HP remains high and ensuring their own survival. In other cases, they ignore the fact they even have healing magic and waste time with ill-fated attacks. Don't even think about trying to let them auto-battle the more powerful foes, boss or otherwise. 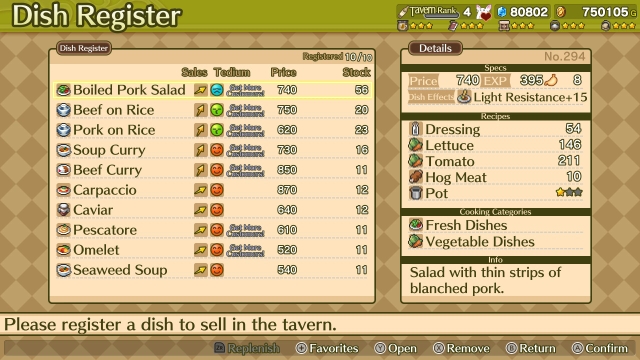 When I played Marenian Tavern Story, I eventually discovered the jewels I would sometimes win in battle or after feeding a round of customers could be spent in an in-game premium shop. There's a cap on what all you can buy, though I never hit that cap myself despite acquiring around 250 jewels in all. This setup led me to assume the game must have been released years ago for mobile devices, where it would have featured micro-transactions to suit impatient players. I looked around just now and found that it did indeed arrive on iOS and Android before releasing on Switch, but only a month or so earlier. Mobile versions allow players the option to purchase jewels (125 of them cost $8.99, and there are options to spend more or less money as desired), which more than makes up the difference in price point between mobile and console versions of the title if you go that route.

Marenian Tavern Story: Patty and the Hungry God is a lengthy RPG experience for Nintendo Switch that is reminiscent of the Atelier series, but with some clever tweaks. The sim elements are slight, and the RPG elements do just enough to justify a campaign that is designed to last dozens of hours. There are other games of a similar nature that you'll probably find more satisfying, on Nintendo Switch and on other platforms, but you could also do a lot worse if you're looking for a lighthearted romp in a fantasy world.

If you enjoyed this Marenian Tavern Story: Patty and the Hungry God review, you're encouraged to discuss it with the author and with other members of the site's community. If you don't already have an HonestGamers account, you can sign up for one in a snap. Thank you for reading!

© 1998 - 2023 HonestGamers
None of the material contained within this site may be reproduced in any conceivable fashion without permission from the author(s) of said material. This site is not sponsored or endorsed by Nintendo, Sega, Sony, Microsoft, or any other such party. Marenian Tavern Story: Patty and the Hungry God is a registered trademark of its copyright holder. This site makes no claim to Marenian Tavern Story: Patty and the Hungry God, its characters, screenshots, artwork, music, or any intellectual property contained within. Opinions expressed on this site do not necessarily represent the opinion of site staff or sponsors. Staff and freelance reviews are typically written based on time spent with a retail review copy or review key for the game that is provided by its publisher.