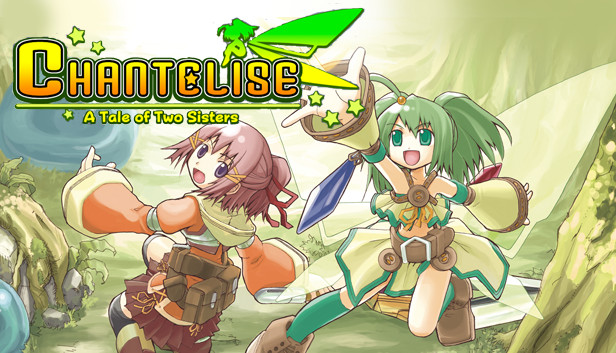 Chantelise: A Tale of Two Sisters offers what you would expect from an anime-style adventure: cute presentation and a charming, lighthearted premise that begs you not to take it too seriously. The tale stars a level-headed sword-wielder named Elise, who journeys with her obnoxious, sarcastic sister Chante. When they were children, a witch transformed Chante into a fairy, and the two of them have been on the hunt for a cure ever since. They eventually happen upon a village that serves as an in-game hub, where they meet an item shopkeeper and her fortuneteller confidant who seem awfully helpful. Unbeknownst to our heroines, they harbor a peculiar secret...

The two new acquaintances first guide you to a ruined temple near the town, where you jump into a fully 3D stage inhabited by 2D sprites. You guide Elise as she chops up slimes, killer bugs, undead creatures and the like, using a real-time combat system that's simple and intuitive. Meanwhile, Chante's magical presence causes the beasts to drop stones that allow you to cast spells. Later on, you even unlock the ability to use multiple stones at a time, granting you access to new spells. For instance, one blue stone becomes a simple, water-based homing projectile. Two of them, though, hit a monster with an ice crystal that potentially freezes its target. Three blues heal Elise, and four summon a water spirit that not only dishes out liquid punishment, but also restores a generous helping of hit points.

Meanwhile, the dungeons you visit early on consist of quick, breezy affairs. They present you with a collection of arena-like rooms, each containing a single goal: eliminate all foes. You don't need to solve any super demanding puzzles or work your way through terribly complex labyrinths, although a few rooms sport some winding pathways. You only need to bump off everything and move onto the next room, simple as that.

And let me tell you, it grows tiresome before long... 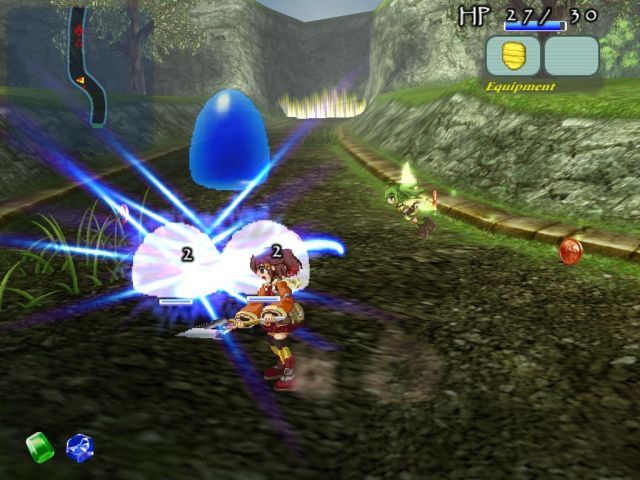 Despite its silly story, Chantelise's early stages don't offer much noteworthy content. For the most part, you travel through short, basic gauntlets brimming with weak monsters that fall easily to a little button mashing. If you happen to die while exploring a ruin, all unlocked doors remain open. You don't need to defeat a chamber's hostile population twice, and only need to run past all of your previously defeated adversaries to resume your exploration.

These areas do showcase one intriguing feature, at least: hidden treasure chests. You obtain hints regarding their locations from a priest, who gives the advice only in exchange for a cut of your maximum hit points. However, if you're smart, you'll either save scum (save before receiving the tip, jot it down and then reload) or Google the locations and spare yourself the health deficit. You don't actually need to pay the hit points in order to find the treasures. Even if you decide to accept the trade-off, you can still boost your max HP by purchasing or finding consumables.

Unsurprisingly, Chantelise never reaches brilliance. However, it's every bit as persistent and eager as its protagonist, and never gives up trying to entertain you. For me, it managed to accomplish that mission, and I began to appreciate more of its strengths halfway through the campaign. 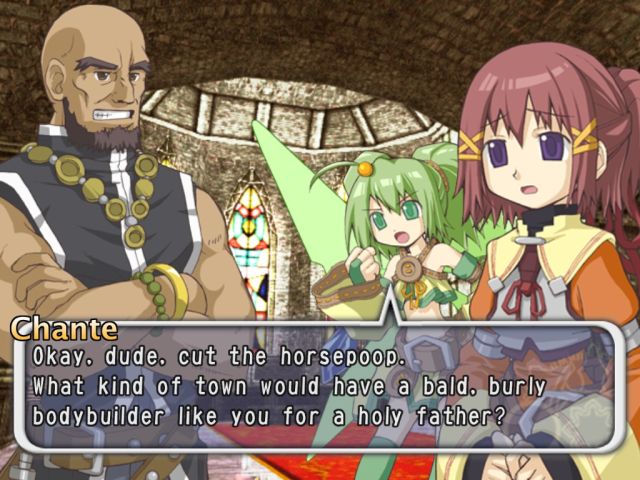 Chantelise's second half ramped up its difficulty rating, for starters. Flying eyes with ranged attacks and straight up knockoffs of Final Fantasy's bombs appeared, as well as armored knights and pesky wizard-ghosts who could phase in and out of existence. One critter that really drove me nuts was a fish that always seemed to get the drop on me, bringing my hit points down considerably with every encounter.

I not only had to work harder, dodge more often and conserve my magical ammo for choice situations, but I had to consider my equipment setup. You see, Chantelise is not a proper RPG, but more of an action-adventure title with light role-playing elements. You don't gain levels and earn permanent stat increases, but instead modify your stats by exchanging bits of armor or accessories. While this sounds kind of bothersome, I actually dug this system because it offered the chance to transform your build on the fly. Sometimes you enter a room full of magic-resistant monsters, and all you need is to bolster your strength to maximize physical damage. Other times, you come across some villains who sling powerful magic, accompanied by skeletons who can only be killed with spells. That's when you beef up your magical damage and defense, and maybe consider using something that'll speed up the spell casting process.

For a while, I failed to notice each level's plain layout, and didn't bellyache so much about button mashing. Chantelise stepped up its game enough that I felt genuinely engaged, constantly plotting out the best way to defeat the contingent before me while trying to mitigate damage. I would only grab certain spells, bearing in mind elemental weaknesses or the probability that I would need to heal myself. I battled bosses with distinct patterns, amassed a collection of merchant fodder to increase my riches and bought new pieces of equipment frequently. 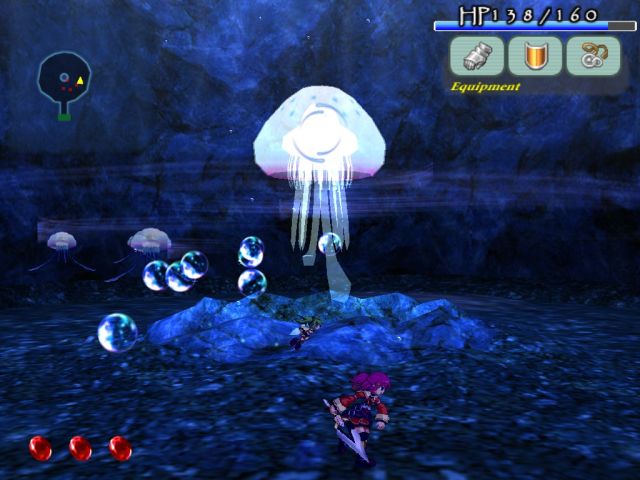 Along the way, even the plot picked up its pace. It didn't become Shakespearean by any means, but it took a few pleasant twists. Both the shopkeeper and the fortuneteller developed into decent enough supporting characters, plus some of the tale's backstory proved worthwhile. Never mind the cliches, like a character becoming comatose after an illness, requiring you to search for a rare flower. The story remained unabashedly basic, but thankfully never aimed to be needlessly overblown or too dramatic.

Although I mostly enjoyed the proceedings, Chantelise's content seldom rose above "good" and into the realm of "great" or "stellar." You see plenty of the same material offered by scores of other Japanese games, complete with familiar enemy types and rehashed plot devices. You can't shake the notion that Chantelise could showcase more content without becoming a bloated adventure. Where are all the side quests? The extra dungeons? The slightly more elaborate dungeons? The super bosses? Hell, where are the mini-games (as trite as those tend to be)?

You only enter one town, and you only ever roam around its square, which is decked out by maybe seven houses. Only three of those buildings serve a purpose, and the others are mere scenery. During my own travels, I only met two merchants, and they both sold more or less the same stuff. The plot consists of similar repetition. The two sisters wonder what to do next, Chante makes snarky comments, Elise voices more thoughtful concerns, then the duo speak to a supporting character and mosey to the next straightforward dungeon. It's a predictable and sometimes forgettable experience, but not one without its perks. Chantelise: A Tale of Two Sisters is just simple and just whimsical enough to be delightful, but it never blossoms into the riveting, well-worn adventure it could've been.

If you enjoyed this Chantelise: A Tale of Two Sisters review, you're encouraged to discuss it with the author and with other members of the site's community. If you don't already have an HonestGamers account, you can sign up for one in a snap. Thank you for reading!

© 1998-2021 HonestGamers
None of the material contained within this site may be reproduced in any conceivable fashion without permission from the author(s) of said material. This site is not sponsored or endorsed by Nintendo, Sega, Sony, Microsoft, or any other such party. Chantelise: A Tale of Two Sisters is a registered trademark of its copyright holder. This site makes no claim to Chantelise: A Tale of Two Sisters, its characters, screenshots, artwork, music, or any intellectual property contained within. Opinions expressed on this site do not necessarily represent the opinion of site staff or sponsors. Staff and freelance reviews are typically written based on time spent with a retail review copy or review key for the game that is provided by its publisher.