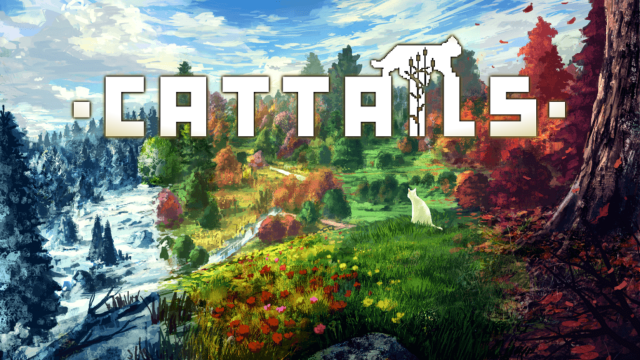 Cattails' premise should tell you all you need to know: it's an RPG where you play as a cat. You're not an anthropomorphic cat or a Garfield or Heathcliff knockoff; just a plain, everyday cat. You customize your kitty's colors, give it a name and perhaps deck it out with some accessories, such as a bell collar or a ribbon. You wake up every morning and tick the usual boxes a stray cat might: hunt for food, play with other cats, get into fights and eventually fall asleep. Of course, the game takes some creative license, featuring tasks for you to complete, in-game currency called "mews," a few side quests and a short campaign.

Your adventure begins when your human family dumps you at the side of a country road, and another feline named Coco greets you. He teaches you the basics of survival, particularly hunting and foraging, then sets you up with one of three factions. Once you've settled on a team, you enter your den and pass out for the night.

From there on, Cattails doesn't place any tremendous demands upon you, and proves both charming and relaxing for a bit. You don't need to save the world or engage in an extremely dangerous mission or anything like that. In fact, for a while all you do is hunt small woodland animals by slipping into stealth mode and pouncing on them when an indicator gives you the go-ahead. Both your prey and various berries you find stave off hunger, and some fruits and flowers even heal you. You receive experience for each animal you catch or plant you pick, allowing you to boost passive stats or unlock active skills. Over time, you become a more skilled hunter and a better swimmer, plus you can teleport back to your den or nail your opponents with a scratch that slowly bleeds them dry. 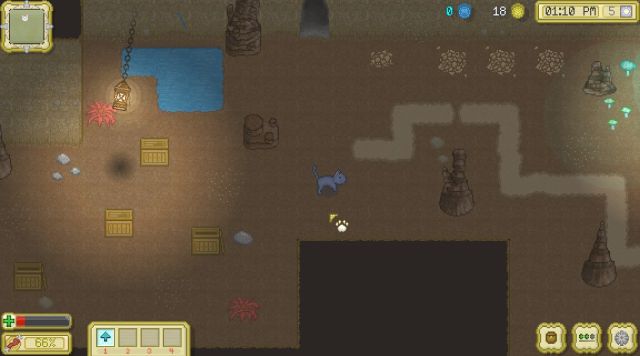 Cattails provides you with a wide countryside to investigate, but doesn't offer much beyond a few landmarks and terrain types. Its old school, 2D visuals don't quite measure up to its contemporaries in terms of splendor, though you do see the occasional cool thing, like a gnarled tree or peculiar monuments. However, your aimless journeys serve as the perfect time to notice and appreciate the musical work of Tormod Garvin. Every cut in Cattails' soundtrack accentuates its charm by capturing both the spirit of cat life and RPGs in general. Lovely piano pieces call to mind the free spirited lives of feral cats, while more upbeat tracks remind you of RPGs of yore.

Exploration, however, reveals only a few other activities in which to take part. You can mine for special coins that allow you to buy goods from moles, or engage in border disputes with rival factions to claim more chunks of land. If you wish to be more diplomatic, you can also bring peace offerings to the other factions and gain their trust. Pretty much any item will do, but rarer things like turtle shells or cardinal corpses tend to earn trust more quickly. Of course, you can also save gifts for your own faction, in the hopes of building relationships, coupling with another cat and having kittens. Your den may prove inadequate at first, but choice upgrades add storage facilities and a nursery to your digs.

Let's face it, though; most of this boils down to incessant item gathering or engaging in Cattails' lackluster combat system, which consists of little more than mashing an attack button, sometimes repositioning yourself and throwing out the occasional special attack. You only receive one break from this tedium at the end of each season, in which you attend a festival at a nearby temple to play one whole, simple mini-game. 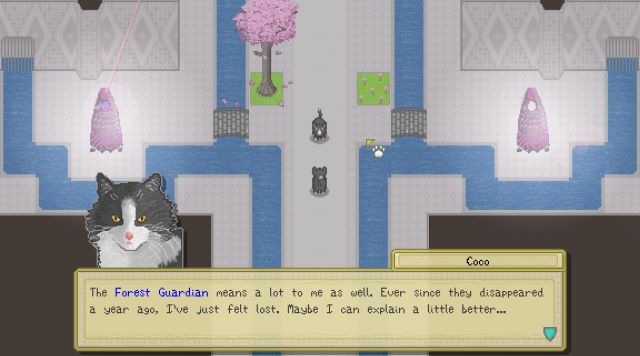 I wish I could say that Cattails' campaign bolsters the experience, but it's really more of the same. Early on, Coco visits your den and asks you to follow him to a nearby temple. He informs you that a forest guardian used to reside there, but has gone missing. After some investigation, you learn that six pillars within the temple demand offerings. Some ask for various types of fish, one calls for bugs and others require dead animals or plants. So yeah, more item fetching... To make matters worse, some pillars want super rare goods. For instance, you almost never see a conch or a catfish around, and you can only hope to get the latter as a prize from the summer-end festival.

Thankfully, you can still gather these goodies in fairly short order, although it'll likely take you longer than an in-game year to do so. Once you've completed any pillar's requests, you'll then receive a new quest to fetch a gemstone. The stone lies within a short dungeon, where you need to either complete a puzzle or battle waves of stock enemies (mainly bats or ghosts). A few of these stages require keys to enter, and you can only obtain these keys by gaining the respect of a rival faction. 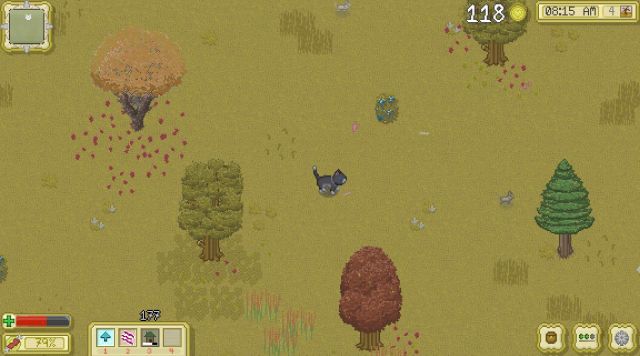 ...and you only gain the respect of a rival faction by bringing them items. Hurray, more fetching!

I was able to complete Cattails' campaign in roughly ten hours. The game didn't end, per se, but allowed me to continue indefinitely. I received the option to start my own faction and attempt to take over the land, and continue to constantly gather meat and berries until I grew blue in the face. However, with so little variety on offer, I figured I would be done with this little adventure for now.

I know, I'm making Cattails sound like it's just an utterly boring game, but it isn't. It's delightful and cute in small doses, but its repetitive nature doesn't exactly beg for late nights and lost hours. Falcon Development was onto something when they crafted this title. It's a low stress piece for people who love cats, and aims to immerse its audience. However, its content only scratches the surface of its concept. I'm not saying they should increase the game's difficulty rating, depth or melodrama. What I'd love to see is more of the same kind of material, but with added variety to counterbalance the humongous array of fetch quests. I think then Cattails would be the ultimate kitty-themed roleplaying experience, aside from maybe Cat Quest.

If you enjoyed this Cattails review, you're encouraged to discuss it with the author and with other members of the site's community. If you don't already have an HonestGamers account, you can sign up for one in a snap. Thank you for reading!

© 1998-2021 HonestGamers
None of the material contained within this site may be reproduced in any conceivable fashion without permission from the author(s) of said material. This site is not sponsored or endorsed by Nintendo, Sega, Sony, Microsoft, or any other such party. Cattails is a registered trademark of its copyright holder. This site makes no claim to Cattails, its characters, screenshots, artwork, music, or any intellectual property contained within. Opinions expressed on this site do not necessarily represent the opinion of site staff or sponsors. Staff and freelance reviews are typically written based on time spent with a retail review copy or review key for the game that is provided by its publisher.