The Armored Core series has come a long way in the twenty plus years since the first titles release. Yet, in some ways its remained the same. The first games strongest selling point was customization -- heres a few hundred parts; buy the core, head, arms, legs, boosters, generator, FCS computer, and weapon systems you like best and put them all together. I can still recall my amazement when I rented Armored Core for my PlayStation in the late nineties, daunted by the seemingly endless combinations of mechs.

Armored Core 2, the first AC title for the newly-released PS2, expanded on all this, adding not only new parts, but also new mechanics. In addition to left-arm laser blades, Your Armored Core, or AC, could now equip a left-arm energy shield. AC2 added extension parts fixed to the shoulders, including missile interceptors, turn boosters, and support missiles. It added weapons mounted inside the core, from a near-useless rear-firing machine gun to floating mines to ECM decoys. Most importantly, it added a new mechanic; heat. Suddenly there was a whole new dimension to play: as your AC takes weapons fire, it builds heat. If your radiator cant keep up it overheats and takes damage. Flame-throwers and napalm missiles were brought in to mix things up a little.

Then Armored Core 3 came along, bringing with it a major overhaul of the game engine. Parts could now be destroyed in combat, and weapons ejected when out of ammunition to free up weight. You could field an overweight or underpowered AC, in contrast to past games where these error messages must be remedied before sortie. Hanger parts were introduced, small arm weapons stored in the core that were brought out when the main was dropped. And, this is the favorite, left-arm projectiles were brought in. No longer was your AC limited to a blade and a gun  now you could have two guns! 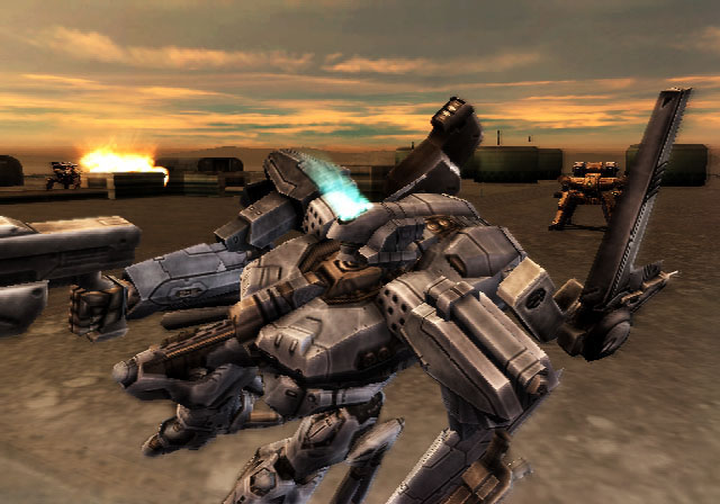 Now, along comes Nexus, the seventh Armored Core title. Nexus moved in a completely different direction from the previous title, Silent Line. Parts cannot be broken anymore. Blade tracking is now removed, pushing the loved laser blade to a back seat role in AC combat. Most player designs dont even equip one.

I, of course, am the exception. Theres always an ELF-2 in my hanger, just in case.

The overall speed of ACs and projectiles has been brought down, making mechs much clunkier, slower and, some feel, more realistic. Energy is in shorter supply, both being toned down for each generator and sucked up when your radiator overheats. But the biggest change is the new heat mechanics. Heat is suddenly the single most important factor when building an AC, because its everywhere. You heat up when boosting, you heat up when taking fire, and your cooling is even reduced when deploying a shield. In fact, even the default AC has a hell of a time staying below 100 degrees (Celsius, of course. The games measurements are in metric) just getting around. All of a sudden its important, and some would say necessary, to sit down with pen and paper and calculate how much heat your AC generates, and how much cooling youd need to stay nice and frosty. Luckily Nexus also brought in part tuning, allowing you to tweak the stats of your partsfor a price.

Still, this has turned off a lot of potential Ravens. Granted, Armored Core has always been about building an AC, and in any title, except for perhaps Silent Line, you spend as much time in the garage tweaking your design as you do blowing things up. But in Nexus, you actually spend more time tweaking. Most of your time is spent in the garage playing with combinations, or in the limited simulator testing them out. Pen and paper calculations are a must for any powerful build; theres no sense over-cooling your AC when you could use those tuning points to free up more weight. Although, this has somewhat removed the mentality many players had in the old games that every single bit of weight must be filled up. Nexus now encourages players to underload their Cores, because less weight equals greater agility. This interesting quirk also means that underloaded middleweight legs are noticeably faster than lightweight legs, which should not happen.

Energy consumption when in emergency cooling is also now a huge factor, especially with the decrease in speed. Normally youd rely on your ACs boosters to get around and evade, but if your Core overheats and you run out of energy, not only do you start taking heat damage but also youre suddenly a sitting duck. Most AC vs AC battles are decided by whose generator goes first.

And then theres the sheer number of parts. While the names and corporations have changed in nine years of AC games, many of the parts from AC1 are, at least in spirit, present. The back of Nexus case boasts Over 400+ Total Parts. Why Total Parts is capitalized eludes me, but lets do the math here and see just how many combinations are available. 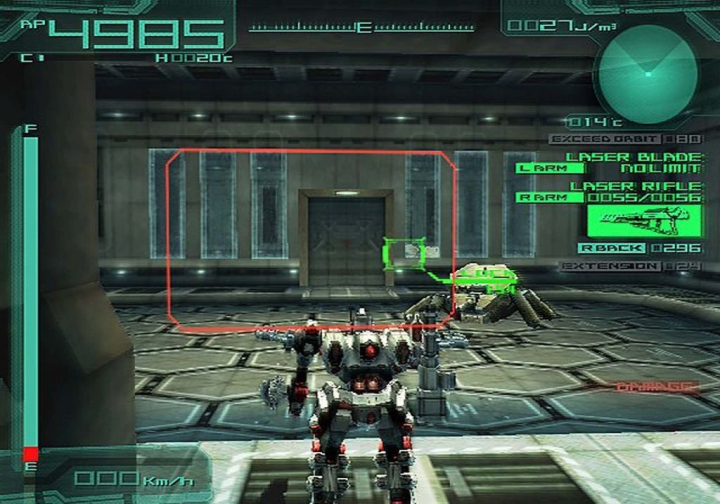 Since I was always funny on permutations and combinatorics and all that crazy stuff in Math 12, and only got a 65% in that class anyway, well stick with just the bare essential parts for now. Twenty-one heads, sixteen cores, thirty-seven arms (sold and equipped in pairs), forty-three legs, ten boosters, fourteen FCSs, ten generators, and ten radiators, multiply them all together and we get7,484,064,000 possible combinations.

Wow. And we havent even touched on weapons, extensions, inside parts, or the legs with built-in boosters. Now granted some of those combinations might be less than usable, yet still, seven billion is a huge number. Huge enough that Im starting to wonder if I might have punched in some of the values wrong. As I said, however, Im no mathematician.

All that said, theres more to Armored Core: Nexus than mech customization, albeit not a lot. As with past titles the plot is lacking, but hey, you dont play Armored Core for its epic storyline. Disk One thrusts you into the role of a nameless member of the mercenary organization known as the Ravens Ark. As a Raven, your skills are in high demand, and the single-player mode consists of you fighting in your heavily customized robot for whichever paying party you see fit to work with. Past titles have featured an arena mode, which in Nexus cannot be accessed in full until the single-player game is completed. Hidden parts abound, and youll have to play through multiple times in order to get them all. The ending is unusual for an AC game, in that its somewhat ironic. I wont spoil it.

For me, Disk Two was a wonderful little stroll down memory lane, amidst gunshots and explosions. It consists solely of remakes of classic missions from previous titles, the first of which, the very first mission from the very first game, brought back all sorts of great memories. Ahh, those were the daysalthough sadly the large rocket launcher was no longer hidden behind a truck in the middle of the bridge. Alas. Yet hidden parts are still in great numbers. You can even collect all the parts to build Vixen, the chief antagonists prototype AC from Project Phantasma. Also unlockable are the intro cinematics to each game, concept art, music tracks, and a host of other goodies. 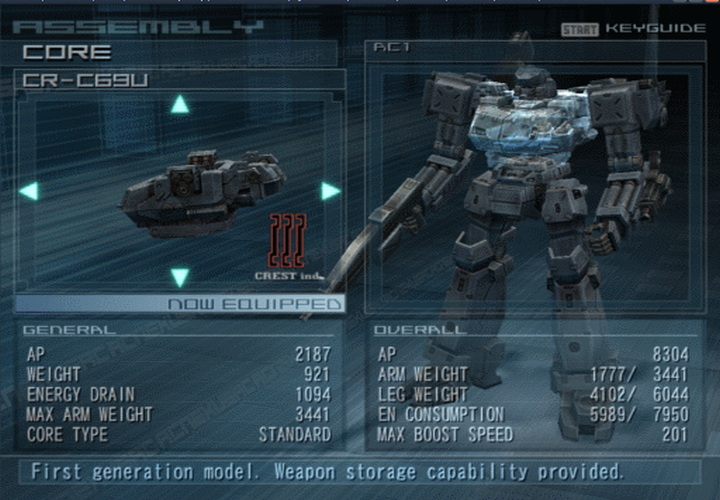 (Speaking of intro cinematics, Nexus is easily the best out of any AC game.)

As always, Nexus sports a Versus mode, allowing you to play with a buddy on splitscreen, or up to four players in a LAN game. Simple tunnelling software means that, with the LAN option, Nexus can go online. Though since my computer is many, many years out of date and on its last legs, I havent been able to get this to work. Yet.

The music and sounds in the game are little different from the rest of the series, in that while they are new, they are mostly unremarkable. The music track is some sort of techno which, while appropriate for the genre and the mood of each mission, is nothing to write home about. The physics and graphics engines, by contrast, are the best theyve ever been in Armored Core. The environments are bland yet interesting, as with every post-apocalyptic setting, and the levels well-designed if a bit small. I particularly like how sunlight now glints off your AC parts. Stability-wise, Ive yet to find even a single glitch. As mentioned before, the controls, while very responsive, are a bit clunkier, which adds to the realism factor. Using both sticks to strafe and aim is a far, far better alternative to the shoulder buttons. I still have to fight down a wave of nausea when I think of the AC1 controls. R1 and L1 to strafe, R2 and L2 to look up/down. What were they thinking? Ugh...

Now, there is one final con, and that is part balance. Its tricky to perfectly balance every part with simply so many, and Nexus...well...there are a few parts that are just broken. Combinations of maybe ten different parts dominate the tournaments in Japan, ridiculous in a game that has customization as its major selling point.

Nexus is an attempt at a different style of mech game, to contrast the rest of the series that was quickly becoming a Gundam clone. Slowing things down and adding a gritty, clunkier feel to the Cores was certainly the right move by From Software, but I worry that they might have gone a little too far. While Silent Line was nowhere near as realistic as Nexus, things in this latest title seem perhaps too slow. As mentioned before, in order to build a Core with anything better than functional performance, one has to spend what feels like twice as much time tweaking than playing. Again, its the right move, and it contrasts what was for the most part a mix an match in Silent Line, but I feel it was overdone. While still enjoyable, Nexus is not for the casual gamer. Only hardcore Ravens are likely to get the most out of it.

If you enjoyed this Armored Core: Nexus review, you're encouraged to discuss it with the author and with other members of the site's community. If you don't already have an HonestGamers account, you can sign up for one in a snap. Thank you for reading!

© 1998 - 2022 HonestGamers
None of the material contained within this site may be reproduced in any conceivable fashion without permission from the author(s) of said material. This site is not sponsored or endorsed by Nintendo, Sega, Sony, Microsoft, or any other such party. Armored Core: Nexus is a registered trademark of its copyright holder. This site makes no claim to Armored Core: Nexus, its characters, screenshots, artwork, music, or any intellectual property contained within. Opinions expressed on this site do not necessarily represent the opinion of site staff or sponsors. Staff and freelance reviews are typically written based on time spent with a retail review copy or review key for the game that is provided by its publisher.