Do you like mini-games of the sort you might encounter in a typical Mario Party? The answer to that question is probably the same as your answer to a more pertinent one: will you like Timberman VS?

If a fellow wanted to damn it with too much brevity, he would say Timberman VS is a glorified mini-game. It just so happens that I (somewhat) recently played a mini-game collection from Mastiff called Party Planet, which also is available on Nintendo Switch. One of the 30+ games that other title included for less than $40 is called "Mystical Totem." Players control Eskimo characters who stand at the base of totem poles. They move to one side or the other to avoid hitting their heads as they knock away blocks and the upper portions of the poles descend, arms outstretched. If players get too cool because they're not moving quickly enough, or if they bop themselves on the head too much (usually just once), that's the end of their fun. 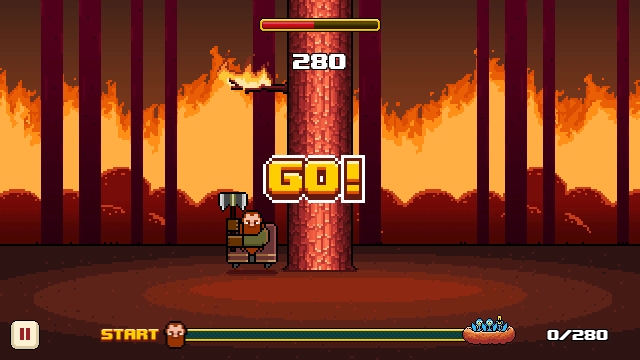 Timberman VS offers a remarkably similar experience, except the trappings are different. Instead of igloos in the background, there are trees in a forest or tires in a outdoor arena or similar. You're chopping at massive trunks and the like, instead of totem poles. And you don't collect fish to warm your body temperature over successive rounds. Though the two mini-games offer slightly different ways to pass the time, it's clear they share a lot of the same DNA.

Of course, Timberman VS pads things out a bit, because it's not part of some compilation and so must single-handedly justify the amount it costs to purchase it from the eShop. Chopping vertical columns of stuff is all you do here, and there are options on the exact rules to keep things interesting for a (somewhat) extended period of time. 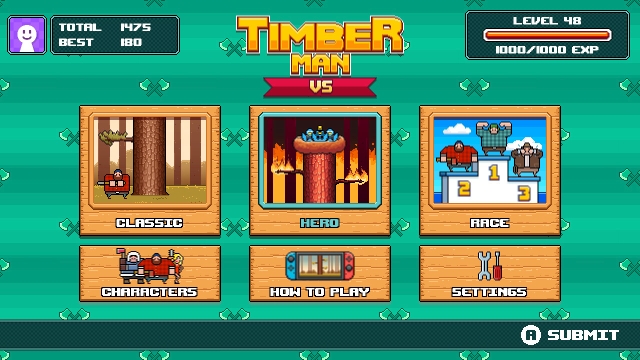 First up, there are three different modes of play. These typically allow as many as four players to participate, if you pair the requisite controllers. In Classic, you just try to chop as many times as you can without hitting your head, until the timer expires. In Hero mode, your goal is to reach a bird's nest at the top. And in Race mode, you can determine the height of your tree and the first player to the top is the winner.

There's not a lot of difference between these modes. No matter which option you choose, you're given incentive to chop the trees as often as possible in a short period of time. That's the hook, you see. You want to move quickly enough that you beat any other players or in-game objectives, but not so quickly that you make silly mistakes and have to drop out early. It's a test of endurance, of sorts. 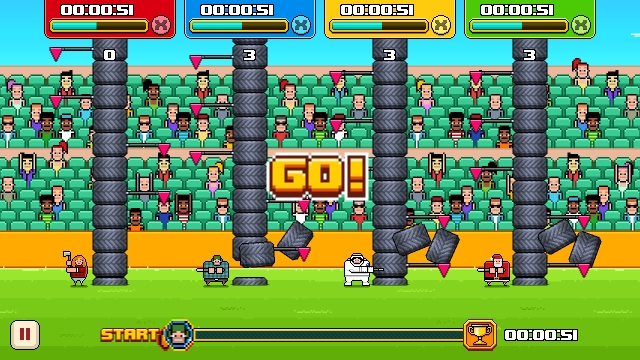 When I played with friends, we had a decent time for I would say around 10 or 15 minutes. We tried the various modes and we laughed at some of the available character avatars. I was especially pleased to see that one of them looks a bit like Nintendo's famous Princess Peach character, who my friend likes to select whenever we race and he beats me at Mario Kart 8 Deluxe. Also on offer were a few options that resembled other characters from nerd culture, such as Mr. T and The Hulk. They weren't given actual names, but their sources of inspiration were clear. Also, continuing to play the game generates experience points that automatically unlock additional characters until you have an impressive total of 56 options.

Unfortunately, 10 or 15 minutes of fun was about all we got out of the game before its entertainment value had essentially peaked in ways additional character skins couldn't cure. Fatigue settled on the whole affair like a wet blanket. We could have kept playing for more rounds after that, but really, we'd seen the bulk of what the game had to offer in just that short span of time. It's hard to justify sticking with the title when we have the more diverse likes of Super Mario Party begging for our attention in the same apartment. 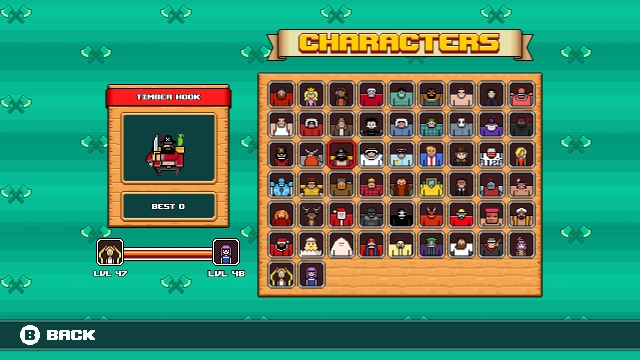 If you're looking for a brief experience that a small group of friends can start playing and immediately enjoy for 10 or 15 minutes, then forget about entirely by the next game night that rolls around, I would say Timberman VS is a safe bet. It's good at what it attempts, but what it attempts isn't sufficiently ambitious to do more than just barely justify the current $1.99 price tag.

If you enjoyed this Timberman VS review, you're encouraged to discuss it with the author and with other members of the site's community. If you don't already have an HonestGamers account, you can sign up for one in a snap. Thank you for reading!

© 1998-2021 HonestGamers
None of the material contained within this site may be reproduced in any conceivable fashion without permission from the author(s) of said material. This site is not sponsored or endorsed by Nintendo, Sega, Sony, Microsoft, or any other such party. Timberman VS is a registered trademark of its copyright holder. This site makes no claim to Timberman VS, its characters, screenshots, artwork, music, or any intellectual property contained within. Opinions expressed on this site do not necessarily represent the opinion of site staff or sponsors. Staff and freelance reviews are typically written based on time spent with a retail review copy or review key for the game that is provided by its publisher.