Although in your capacity as the Devil you would like a fresh start after years of being the bad guy, the local hero population isn't keen to see that happen. Forgiveness is fine when it feels good, but you've stepped on a few toes in your day, and that has everyone seeing red. They'll come for you with pitchforks of their own--and swords, and cannons and spells--and you have to be ready for them. The problem is that you're basically defenseless. So you have to let your tenants do the dirty work. After all, they're monsters.

Unholy Heights is a reasonably unique game, even though I can think of a few games that have featured different portions of the same overall idea over the years. One Piece Mansion let players juggle an apartment full of disagreeable tenants way back in the PlayStation era, and NIS America's Holy Invasion of Privacy, Badman! What Did I Do to Deserve This, My Lord!? found players defending their dungeon from invading heroes. It's just that the dungeon didn't resemble an apartment complex. 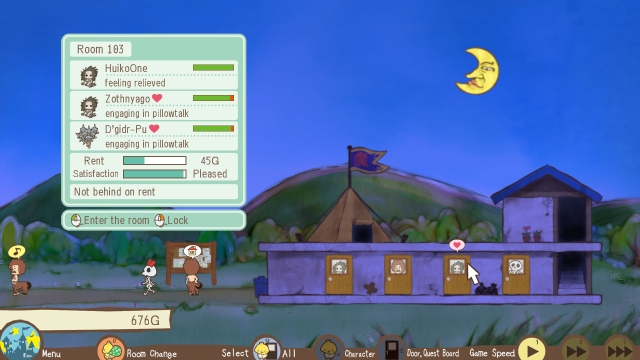 Gameplay begins simply, with players responsible for protecting a four-room building from eventual hordes of invading heroes. Before the good guys come, though, a few monsters will sign rental agreements and try to build a life for themselves. You can impact their likelihood to stick around for multiple months by charging reasonable rates, but in exchange your precious tenants will expect you to do things like install refrigerators and fans and such to make them comfortable. Different species of monster have different preferences and tendencies. Some are cheapskates and will barely pay for anything. Others have a hard time holding down a job and couldn't meet your demands even if they wanted to, which leaves you with the tough choice of whether to evict them or let them stick around because they have other attributes or you're too invested in their potential futures to let them fly the coop.

Apartment management is fairly simple, once you get the hang of it. You have a few essential categories of furnishing that need almost constant improvement. As you make enhancements, to individual units, you can start to charge more and your tenants will let you know what other changes they would like to see if you're going to insist on charging them rent. When things get too far out of line, they get "sick" and then you don't get much info at all, so it's important to pay attention to the various prompts until you have a feel for it all.

Of course, you can't just decorate and renovate endlessly. You only have so much money, which is brought in both by charging rent and by accepting missions that your residents then complete on your behalf. Though you have to repel an invasion once every month or thereabouts, you can also choose to brave special assaults from heroes with a real ax to grind. The rewards are greater, and may even include the option to attract additional types of monster, or to purchase more useful furniture that might cater to the whims of a classier sort of clientele. 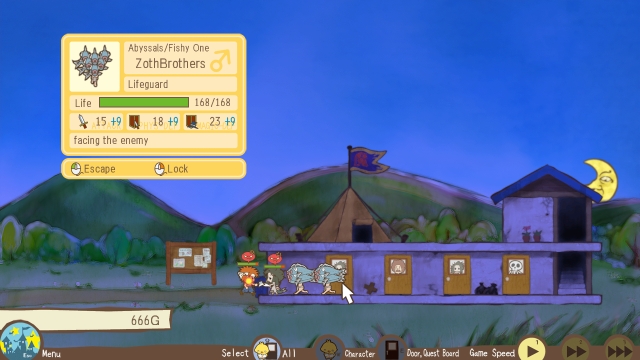 When battles commence, you decide who emerges from the apartment by clicking on the corresponding door. That will send the available tenants out to meet the invading force. At least, it will if they happen to be home when enemies arrive. Sometimes, your best fighters will be off working a job, and then they may not come back until halfway through the proceedings... which is darned inconvenient. Heroes make a beeline for your loft on the roof, and if they can get to it and rob you and flee in time, they succeed on their raid and you lose resources you can ill afford.

What makes Unholy Heights a risky, challenging sort of sim is the existence of permadeath. As in Fire Emblem your heroes are gone for good if they fall in battle. It doesn't matter how much energy you put into building them the perfect suite, how many times you've carefully encouraged romances that produced children who found new lovers to procreate with and produce still more powerful progeny. A death is a death, plain and simple.

It might sound silly, but I found myself growing attached to the characters even though they didn't have personalities beyond those I gave them in my head. The little text notes about what they're doing with their day (i.e. what they do for a career, how they spend their spare time) made it so that I would really root for for that blob of slime that started by writing scathing letters to the editor and eventually started writing and became an editor, or the zombie that went on to become the owner of its own taco stand. The monsters find mates, have kids and send them off to school... and then some hero might come along and make that child an orphan with a few quick sword thrusts. It doesn't seem quite fair. 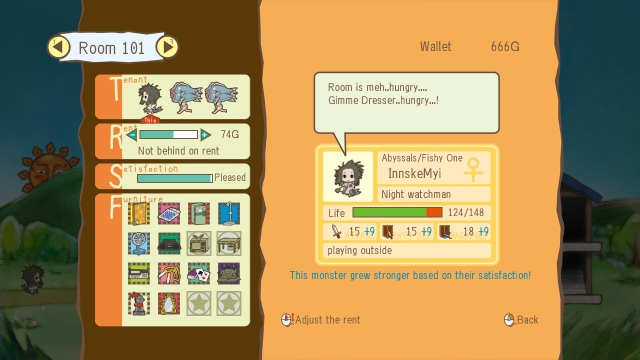 But the emotional attachment isn't the end of it. As you near the end of the campaign, the heroes grow more powerful still. And even if you build up a huge pile of money and you have a four-story apartment decked out in the finest of furnishings, you can still screw yourself over pretty badly if you let too many of your bravest monsters finally fall to heroes in an unfortunately timed raid. Of course you can save regularly and reload a prior state if you make mistakes, but that doesn't seem quite fair.

Unholy Heights is a surprisingly engaging time killer, the sort of experience that will allow a certain sort of player to become deeply invested in the tiny little fantasy world that is a rundown apartment complex. I'm an example of that sort of player, and I admit to letting this game totally dominate hours of my time as I became one of the most devilish landlords you'll ever see. Will you be the next one to fall victim to its charms?

If you enjoyed this Unholy Heights review, you're encouraged to discuss it with the author and with other members of the site's community. If you don't already have an HonestGamers account, you can sign up for one in a snap. Thank you for reading!

© 1998-2021 HonestGamers
None of the material contained within this site may be reproduced in any conceivable fashion without permission from the author(s) of said material. This site is not sponsored or endorsed by Nintendo, Sega, Sony, Microsoft, or any other such party. Unholy Heights is a registered trademark of its copyright holder. This site makes no claim to Unholy Heights, its characters, screenshots, artwork, music, or any intellectual property contained within. Opinions expressed on this site do not necessarily represent the opinion of site staff or sponsors. Staff and freelance reviews are typically written based on time spent with a retail review copy or review key for the game that is provided by its publisher.