Quest of Dungeons is a roguelike for Nintendo Switch that sends players into a deep dungeon to restore light to a darkened world. To do that, they'll have to venture to the bottom of a harrowing labyrinth, where every action they take could be their last. It's addictive fun if you're into that sort of thing, though probably also nothing you haven't already seen before.

The game begins by allowing you to choose from one of several heroes, each with a distinct fighting style. The Assassin is my personal favorite, because he fires arrows from a distance. Most adversaries, bosses excluded, won't ever get close enough to inflict any melee damage, and any spells they hurl his way tend to have limited efficacy. Or he can just eat some chow or gulp down a potion and be good as new.

But there are other characters, if you're not into that approach. You can bash foes up close with the Warrior, wield powerful offensive magic with the Wizard or use the Shaman if you want a mix of the last two. And those aren't the last characters you'll have available to you, but to expand your roster you'll have to successfully complete a dungeon run and that's easier said than done. 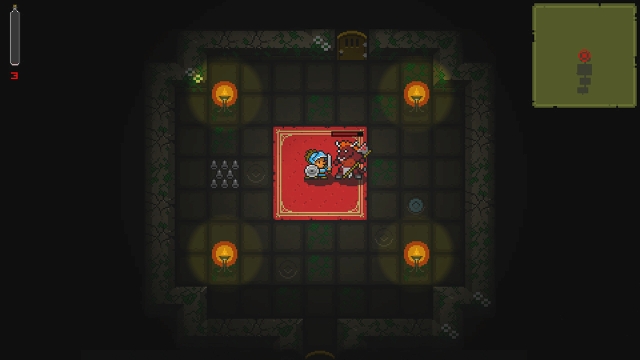 Quest of Dungeons takes a turn-based approach, where the actions you take--such as opening a door or using an item--each take up a turn. Taking a step also expends a turn, and you're not alone as you venture ever deeper into the bowels of the earth. The enemies roaming the same dark corridors get turns too. When you move, they move. If you stay still and just want to think for a bit, they're also cool with that. So the game can move at a quick clip when you're just roaming about in search of treasure, but then it can slow to a crawl when you need it to.

I like that system, but sometimes I forget what I'm doing and try to play it like an action game. I mash the A button and an enemy usually goes down after a few strikes. But sometimes the enemy is considerably more powerful than it looks. My attacks do no good and then it has rushed me and I'm dead meat because it can take me out in a hit or two. Usually, the danger at hand is apparent because you enter a boss's lair and it has fancier interior decorating and a warning message. You know you need to run if you're not yet powerful enough to vanquish the foe. But then sometimes there are enemies that are built to own you, and it's not always as obvious. Text often appears on-screen as enemies boast and taunt, but enemies are liars. Some of them really are lethal, like they say. Some will fall after taking an arrow to the knee.

The sense of risk and reward is present throughout the Quest of Dungeons experience, and it tends to make me want to play just one more time, even if I'm 45 minutes in and suddenly make a mistake that abruptly ends what until that point was a beautiful run. Unfortunately, there's also a tedious grind that is part of the package. Every time I reach a new floor, I know it's time to run around and (hopefully) avoid the boss while I take out weak enemies and break apart of every statue and barrel I can find in hopes of finding more powerful equipment to equip or to sell to a merchant. 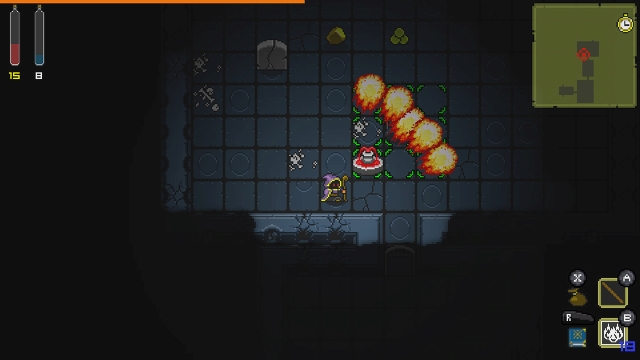 Dungeons are randomly generated, so that no two runs are quite the same. That's admirable on the one hand, but sometimes it can really work against you... like when the dungeon boss room is situated right next to the starting chamber. Yeah, game. I think I'm maybe going to need to power up a bit first, if that's okay with you. Another problem is that keys are often required. They're expensive to buy from a merchant, and you may wander a long time without finding said merchant, so that sometimes means a lot of backtracking and aimless wandering if you want access to every room and every loot-bearing treasure chest.

Visually, the game looks fairly simple. There are only a few floor templates and most of them look rather drab, but that's okay because visibility is poor and that's part of the appeal. You're running around with a lamp, hoping there's not a super powerful monster lurking in the darkness just beyond what you can see. Light flickers off walls and if you round a bend in the path, you won't be able to see well until you actually clear it. I've had monsters surprise me that way. So I don't hold the basic visual design against the game. It's devilishly effective. 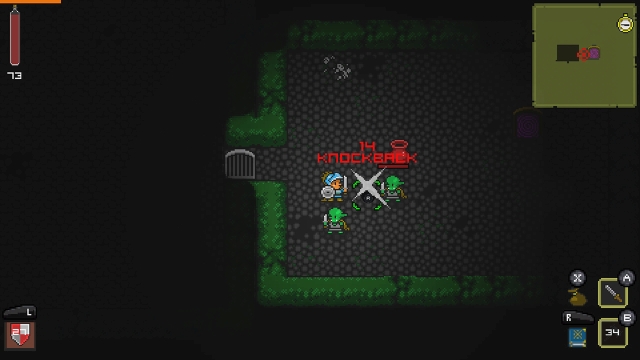 Quest of Dungeons should keep most players busy for a long time. There are three separate campaigns, each taking you through increasingly brutal environments. And there are numerous difficulty settings, which increase or decrease the amount of grinding you'll have to endure in order to get powerful enough to face your adversaries. It's also possible to create a custom dungeon, with criteria that suit you, in case you get tired of the more standard campaigns. And there are optional quests within each location to keep you busy hunting down extra foes, if that's your thing.

I feel like the roguelike used to be a lot more uncommon than it is nowadays. Quite a few developers have presented capable adventures within the genre in recent years, and Quest of Dungeons is one of the better ones I've played. It's instantly accessible, moves at a pace you dictate, and provides a challenge and quite a bit of value on repeat plays. You can also find it on 3DS and Wii U, but now that I've played it on Switch, I'm not sure I'd want to experience it any other way.

If you enjoyed this Quest of Dungeons review, you're encouraged to discuss it with the author and with other members of the site's community. If you don't already have an HonestGamers account, you can sign up for one in a snap. Thank you for reading!

© 1998-2021 HonestGamers
None of the material contained within this site may be reproduced in any conceivable fashion without permission from the author(s) of said material. This site is not sponsored or endorsed by Nintendo, Sega, Sony, Microsoft, or any other such party. Quest of Dungeons is a registered trademark of its copyright holder. This site makes no claim to Quest of Dungeons, its characters, screenshots, artwork, music, or any intellectual property contained within. Opinions expressed on this site do not necessarily represent the opinion of site staff or sponsors. Staff and freelance reviews are typically written based on time spent with a retail review copy or review key for the game that is provided by its publisher.