Playing Warioland: Super Mario Land 3 makes one thing clear: by 1994, Nintendo had mastered its formula to the degree that it could make an excellent Super Mario game featuring a character other than Mario, a character whose powers felt familiar and yet were noticeably different.

Sure, one could say the company already did that on the NES with Super Mario Bros. 2, a game featuring four different characters with their own quirks. Warioland is a different breed altogether, however. After serving as the villain in the second Super Mario Land offering, Wario grabbed himself a starring role in the follow-up. Licking his wounds after losing the previous game's climactic battle for Mario's castle, the greedy dude is not out for revenge, but riches instead. It's a quest that sets him against a horde of equally greedy pirates over the course of 40 stages. 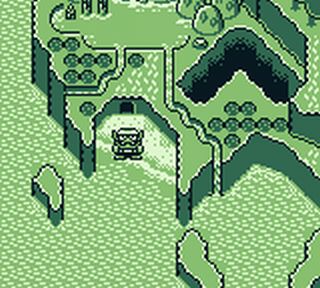 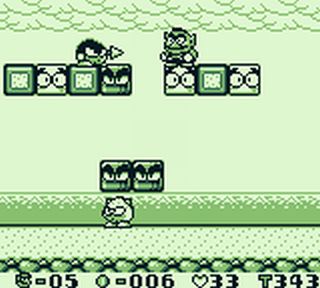 Wario is larger than Mario, and a bit slower and more unwieldy to control. To make up for that, he's also more powerful. Simply running into enemies will damage them instead of him. However, every foe has some sort of pointy thing attached to them that will cause the hefty scoundrel damage. Whether it be the beak of a bird, the spears held by this game's version of Goombas or the swords wielded by pirate ducks, those protruding points are all hazards to be avoided.

The power-up system works similarly to the average Mario game. If Wario is small, taking damage equals the loss of a life. However, he can collect a number of power-ups to increase his size and allow him to take a hit at the cost of losing that power-up and becoming small and weak again. The hard hat is the basic power-up. It allows him to execute a charge attack that eliminates weak foes and stuns stronger ones. The bull horns are a more powerful version of the hard hat that also grant the ability to cling to ceilings, as well as to perform a butt slam that's quite effective in disposing of foes. The jet hat takes away those two powers, but allows the wearer to float in mid-air for quite the distance (a godsend in more platforming-intensive levels). Find the dragon hat and you'll lose all ability to charge, but can unleash a gout of fire that stretches a fair distance in front of Wario. It's the perfect way to dispose of enemies without worrying about impaling yourself on them.

The power-ups are somewhat different from what Mario is given and, with a couple of exceptions, the enemies aren't identical to what he hops on game after game. However, this game still feels like a standard Super Mario game, which is no small feat when all of the changes are considered. You have time limits to complete stages and will have to get past a lot of the same obstacles, such as bridges that collapse as you step on them and indestructible creatures that at least look like Thwomps, even if they don't share that name. A handful of levels are either auto-scrolling or might as well be, as you'll be tasked with keeping ahead of something lethal such as a wall of lava. Several stages have secret exits leading to hidden stages or, in one case, a complete collection of additional levels. And that's only the beginning, as far as secrets go. 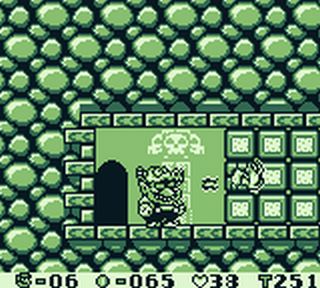 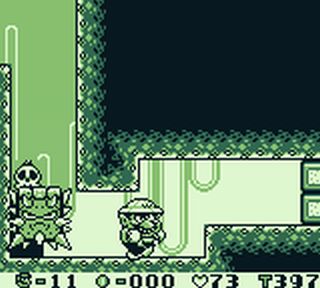 Most important to Wario are the hidden keys and the doors they open. A number of levels contain treasures hidden beyond locked doors. You'll want to find each and every key. You see, Wario's not going after these pirates for anything resembling an altruistic reason. He just wants money -- enough to purchase a residence that makes Mario's old castle look like a pauper's abode. Coins in this game don't go towards extra lives. Instead, they pad his bank account. After every single level, you'll have the opportunity to play a mini-game where good luck will cause your fortunes to greatly increase.

However, even if you collect every single coin in every level and have the sort of good fortune in that mini-game that convinces people to run off to Vegas to try their hand with real currency, you'll still never wind up with truly swank digs unless you acquire most, if not all of those treasures. A coin is a coin, but a treasure is worth thousands of them. And all you have to do is find a key in a block and waltz up to the corresponding door (HINT: They're the ones with the big skull on top of them) to access your reward. Easy, huh?

Not really. Sometimes, you have to really explore levels to find either the key or the door. Other times, you have to re-visit old levels after accomplishing something somewhere else. For example, at one point in the second zone you'll hit a large exclamation mark box that prompts the giant teapot hovering over a mountain to land on it. This event causes water to appear in a particular stage in the first world, allowing you to access its key, treasure AND a secret exit to a new level. Much like Super Mario World, this game rewards players for being thorough. Also like that game, levels with secret exits are marked slightly differently on the world map, so you don't have to spend hours searching for exits that don't exist. 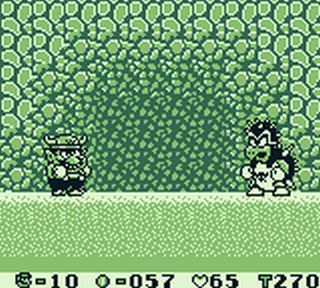 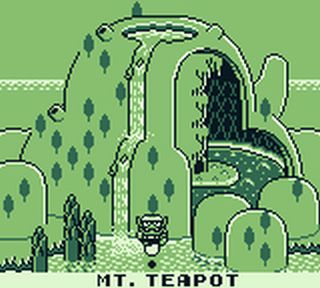 All of which makes this a pretty easy game to recommend. It's a hand-held Super Mario game with a different protagonist, but a comparable degree of excellence and polish, making it different from the norm, yet still similar. While I could lodge a few complaints, they're all minor enough that a fan of the series shouldn't have their experience marred too much. Since this is a Game Boy game, you can count on the graphics being a bit drab. Even if the characters are nicely detailed, a game can only look so good in plain monochrome. Also, it's basically mandatory to find ALL the treasures if you want one of the best houses for Wario. Even the least valuable of those is worth far more coins than you'll find in any of the game's worlds. It always kind of annoyed me a bit to watch the focus of platform games gradually change from "clear all the obstacles" to "collect all the goods strewn throughout the world", making them at least as much a test of patience as of skill. And this adventure could be considered one of the earliest examples of that trend.

With that said, the game still is fun and it's not like finding those treasures is some giant scavenger hunt that detracts from other aspects. While the Game Boy might not have been an all-time great system for fun platformers, it did have its share. This one might even reign at the very top of the heap. With 40 levels scattered over seven zones, you'll have plenty of challenges to overcome in order to make Wario a wealthy, wealthy guy. It might not reach the heights of a Super Mario Bros. 3 or Super Mario World, but for an old handheld game in the series, it's pretty top of the line.

If you enjoyed this Wario Land: Super Mario Land 3 review, you're encouraged to discuss it with the author and with other members of the site's community. If you don't already have an HonestGamers account, you can sign up for one in a snap. Thank you for reading!

© 1998-2021 HonestGamers
None of the material contained within this site may be reproduced in any conceivable fashion without permission from the author(s) of said material. This site is not sponsored or endorsed by Nintendo, Sega, Sony, Microsoft, or any other such party. Wario Land: Super Mario Land 3 is a registered trademark of its copyright holder. This site makes no claim to Wario Land: Super Mario Land 3, its characters, screenshots, artwork, music, or any intellectual property contained within. Opinions expressed on this site do not necessarily represent the opinion of site staff or sponsors. Staff and freelance reviews are typically written based on time spent with a retail review copy or review key for the game that is provided by its publisher.