All algorithms are universal and valid, regardless of whether they are executed.

Cognition is a sub algorithm whose behavior is to perceive properties of the parent algorithm describing it.

Any algorithm giving rise to cognitive entities will be perceived as realities by the entities described.

That is the one and only axiom in Axiom Verge.
Games bringing upon the table the questions of who we are and what to be means are art in videogame form.
Each has and is a philosophy. The philosophy is the questioning and the questions; optionally, the answering and answers as well.

Axiom Verge is one such game.
Also, it is the Super Metroid 2 Nintendo can no longer be even just hoped to make, busy as they have been for well over a decade (and will keep being) with following financial advisors advice and the lofty end of giving investors the one kind of mirth investors are ever in pursuit of.

The endearing welcome attitude is that not only no try is had at concealing the vast purview of the stylistical and morphological taking over from the 2D Metroid titles: contrary, it is shown off since step one in what is an artless declaration of identity and a witting acknowledgment of credit. You even save by pressing UP on the proper spots and such suitable corners of the game world, go figure, are xeroxes of Metroid savepoints.
(On the issue of AV being another Metroid the views of critics do not converge. More interestingly: Happ himself seems to share such uncertainty, veering towards yes or not in answers from different interviews.)

The second thing showing on the radar are the slick controls, settings, menus. Lone  as some rightly termed him  developer Tom Happ found the time to preoccupy himself with player needs the development teams of so-named AAA games can hardly manage to find the time to deal with. (For example: if you use a DualShock®4, you will see its button icons, and not the default Xbox controllers, in the control settings screen as well as everywhere in-game.)

A point of weakness might be the boss fights.
They are stress resilience (rather than reflex- or reasoning-based) tests: it is a quick process to get what to do and success is attained performing the relevant actions a multiplicity of times rather than pulling off acrobatics just a few times.
Happ has let out his disagreement over the Metroid series approach to boss battles, whose nature is firstly of puzzles where figuring out what to do is the core of the task. Indeed, the weak points are apparent to a fault here. The manual difficulty of the fights is far from outstanding, and on a scale of ten Id rate it 7 at highest (on hard mode). Bosses are easily one of the games less shining facets. It is unthinkable to even attempt a comparison with the boss encounters of a La Mulana. AVs large foes are friendly presences in disguise; entertainers met on the course of a tough trip rather than player-resistant barriers to break through.

The electronic music summons up prized 8-bit memories, and minding how Happ is not a musician by trade one loses any proclivity to criticize sternly; nevertheless, the sound  safe for the sound effects, which are fine  goes from a baseline of mediocrity to a ceiling of sufficiency, the thought of a re-release with a professionally authored soundtrack as titillating as it is utopian.

Forceful in the compartment of meaning (you want to oversee even the rare instances of cultural-market-of-the-day-friendly moralizing, before the zeal and depth of the rest), great as a game to play, the Super Metroid follow-up which Nintendo could not make, Thomas Happ did make, as a hobby over a couple years (five), and to him praise and gratitude shall go for this individual 16-bit-like amalgamation of exploration, subtle perplexity, colour, challenge and philosophy, blessed with the kind of beauty to which surrender comes spontaneous. 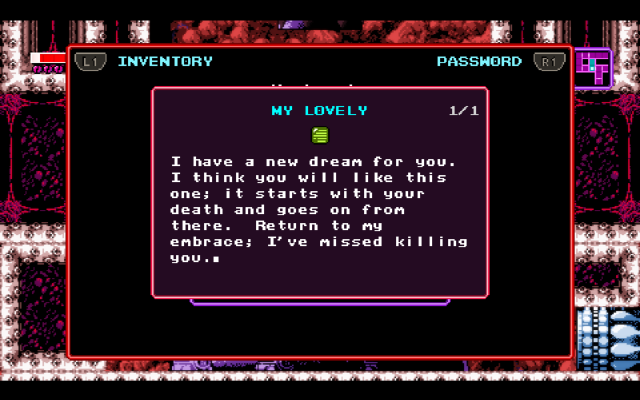 © 1998 - 2023 HonestGamers
None of the material contained within this site may be reproduced in any conceivable fashion without permission from the author(s) of said material. This site is not sponsored or endorsed by Nintendo, Sega, Sony, Microsoft, or any other such party. Axiom Verge is a registered trademark of its copyright holder. This site makes no claim to Axiom Verge, its characters, screenshots, artwork, music, or any intellectual property contained within. Opinions expressed on this site do not necessarily represent the opinion of site staff or sponsors. Staff and freelance reviews are typically written based on time spent with a retail review copy or review key for the game that is provided by its publisher.