The evolution of arts and entertainment is a strange thing. Game genres mature, expanding core concepts while ditching outdated elements. They become more complex, and yet more refined. However, fans of older titles grow to be developers themselves, with plans to revisit the glory days of their youth. They then take the genre backwards in time and craft retro-style love letters. It's not just categories that evolve, though. Characters who were once considered obscure sometimes transform into mass marketed icons. They shed their old personas in favor of more lighthearted depictions. Eventually, they grow tiresome due to overuse.

Given the game I'm reviewing, Cthulhu Saves the World, I think you can tell where I'm going with this discussion. This decade saw an explosion in Cthulhu-themed products and memorabilia. Plush "Chibi-Cthulhus" were everywhere for a while, Lovecraft-inspired parlor games cropped up occasionally, memes popped up occasionally and the Great Old One saw countless DeviantArt iterations. He became a staple at places like Hot Topic, and even starred in some of his own video games. It got to the point that some folks grew almost as tired of Cthulhu as the did of zombies and unicorns.

Meanwhile, successful faux-retro titles paved the way for further remembrances of old genre tropes. We witnessed the return of old school platformers, with implied promises that other genres would get their due time warp. So it wasn't a surprise that vintage RPG trappings would rise from the depths as well. 8-bit sprites and plain battle backgrounds surged back to life, reminding all of us where Dragon Quest and Final Fantasy got their starts. 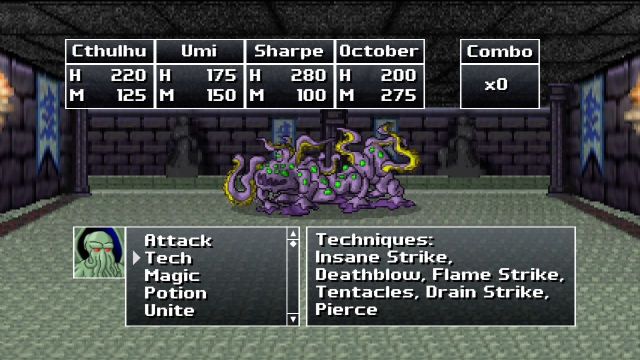 Cthulhu Saves married two concepts that would eventually become familiar. Developer Zeboyd Games pieced together an RPG that mimics NES-era, turn-based fare, and plugged Lovecraft's sanity-devouring sea monster in for good measure. As the title implies, Cthulhu strays from an antagonistic role and takes up the blade to become an unlikely hero. A mage seals his powers, preventing him from destroying the world. He can only gain them back by embarking on an adventure and committing random acts of kindness.

Of course the premise sounds ridiculous, but you have to keep in mind that this is a comedic adventure. For instance, Cthulhu discovers how to regain his powers by overhearing the narrator. From there, our hero casually breaks the fourth wall often, shouting lines like "I can save anywhere? What is this, a first-person shooter?"

You might be wondering: how does a devolved RPG with a hyper-evolved protagonist manage to become playable even years after its release? Short answer: because it's a blast to play. You see, Cthulhu Saves is self-aware. It knows it's an RPG lampooning its own genre, but also knows it must avoid the traps at which it thumbs its nose. It accomplishes this by actually presenting a very solid, addictive battle system that apes the ancient ones while possessing more modern qualities. It's entirely menu-based and sports only the most common options: battle, items, spells, etc. However, it's lightning quick in execution. As you select actions, the game segues into smooth animations and wastes no time getting through every unit's turn. However, it also realizes that some of us are impatient and would rather speed through random fights. It thus allows you to sometimes mash the A button and skip animations, so that turns last mere seconds rather than minutes. If you're up against a weak enough party, you'll even fly through the whole battle before your brain can even process it. 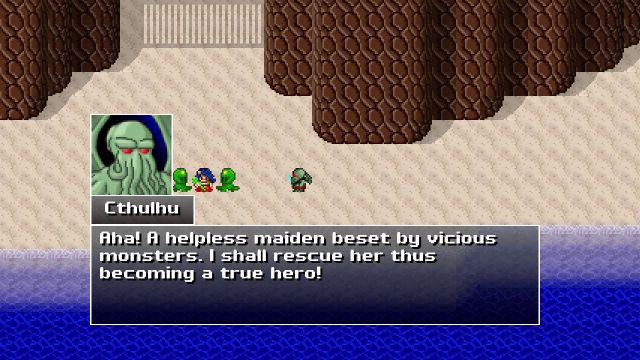 Of course, you still need to prioritize your targets from time to time. Some adversaries are too powerful to keep alive for too long, while others might require certain elemental attacks do deal with quickly.

A combo meter builds up as you land blows and successfully cast offensive spells. Some of your skills and spells rely on the combo meter, as a higher rating leads to heftier damage. Skills called "combo finishers" are especially essential for surviving this campaign. As you advance, you'll meet some truly powerful bosses who grow stronger while they live. If you let them linger for too long, they'll eventually overpower you. Combo finishers reset your combo meter to zero, but deal immense amounts of damage based on your current combo rating. They're ideal for tearing off huge chunks of a boss' hit points, ensuring they won't live long enough to overwhelm you.


How well you perform sometimes depends on your warriors' builds. Every time a party member levels up, you receive a choice in regards to their own growth, be it stat increases or learning new skills and spells. Fo r instance, you might get you the option to take ten strength for a level up, or five strength and five agility. Or you'll earn the choice of a fire spell that heavily damages one opponent versus another that lightly harms all of your foes. If you choose one, you forsake the other, so you need to consider your selections carefully.

Earlier RPGs rarely gave you a growth system like this one. For the most part, your character matured along a prescribed path that seldom allows you to build them yourself. Other titles give you complete control over your heros' developments, but a system like that doesn't sit well with breezy games like Cthulhu Saves. Zeboyd wisely took a middle approach that was complex enough to separate this title from its predecessors, but simple enough to maintain the experience's snappy pace. 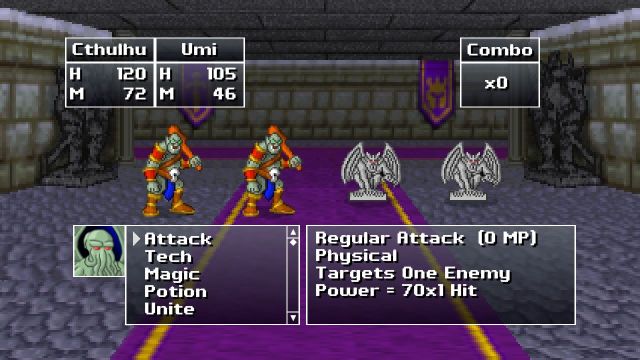 You would expect a great RPG to feature terrific dungeons and exploration elements, and Cthulhu Saves mostly delivers. Stages offer convoluted passageways, with plenty of branches and dead ends to keep you on your toes. Exploration often nets you excellent goodies, though, as some dungeons hold unique pieces of equipment that graciously strengthen your allies.

I'm not going to lie, though. Sometimes these levels can be so complex that they're exhuasting. You feel like you've been there for hours, searching every corridor and fighting off monsters. At times, I couldn't stomach playing beyond a single dungeon because the level itself was too drawn out and I needed to take a break after I was done with it. The good news is that the game includes a battle counter of sorts. Each time you engage in a random encounter, the counter drops by a point. When it reaches zero, you stop receiving random encounters for that area, and must manually enter battles instead. This cuts back on the time required to voyage through dungeons, especially if you start a portion of one by eliminating creatures before exploring it.

Cthulhu Saves the World is a brave step back for RPGs, and yet another title to showcase the Great Old One. The former quality is terrific because Zeboyd Games knows how to craft an old-style roleplaying experience that feels fresh. The latter is a treat, even if you are tired of the over-marketed Cthulhu (I'm not, personally, but plenty of people are). It's a humorous adventure that puts a new spin on the Cthulhu mythos and makes his inclusion at least tolerable if you're not much of a fan these days.

If you enjoyed this Cthulhu Saves the World review, you're encouraged to discuss it with the author and with other members of the site's community. If you don't already have an HonestGamers account, you can sign up for one in a snap. Thank you for reading!

© 1998-2021 HonestGamers
None of the material contained within this site may be reproduced in any conceivable fashion without permission from the author(s) of said material. This site is not sponsored or endorsed by Nintendo, Sega, Sony, Microsoft, or any other such party. Cthulhu Saves the World is a registered trademark of its copyright holder. This site makes no claim to Cthulhu Saves the World, its characters, screenshots, artwork, music, or any intellectual property contained within. Opinions expressed on this site do not necessarily represent the opinion of site staff or sponsors. Staff and freelance reviews are typically written based on time spent with a retail review copy or review key for the game that is provided by its publisher.