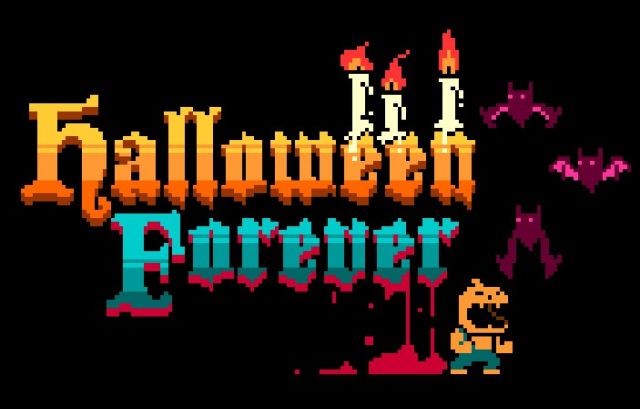 I applaud any development team that is willing to fully commit to capturing the essence of retro titles. Plenty such games offer old school mechanics and presentations, but marry them with modernized concepts, such as infinite lives and artistic visuals. However, some indie devs wish to play chicken, if you will. They seek to craft a product that apes ancient game design as much as possible without tossing in too many poorly aged conventions. The closer a video game comes to imitating ancient adventures, the more likely it is to showcase grossly dated concepts that scare away potential buyers. In some cases, a developer manages to design a game that feels like it belongs on NES or on Amiga or in an arcade without entirely sacrificing quality. Halloween Forever is just such a title...

Engrossing characters and deeply scripted cutscenes? Halloween Forever doesn't have time for that jazz. Instead, its premise consists of an anthropomorphic jack-o-lantern named Pumpkin Man, who's on a mission to figure out why things are so creepy. In particular, disembodied heads, monstrous spiders, zombies, chainsaw-wielding maniacs and baby-spitting frog-people now populate the grounds around Pumpkin Man's resting place, and they are apparently a concern to living, carved pumpkins. So Pumpkin Man decided it was best to exterminate his foes by puking candy corn on them.

I mean, how hardcore is that enemy lineup? Frog people that spit baby frogs? Imagine if you got into a bar fight and everyone started coughing up small children all over each other. That's utterly horrifying, and I love it. 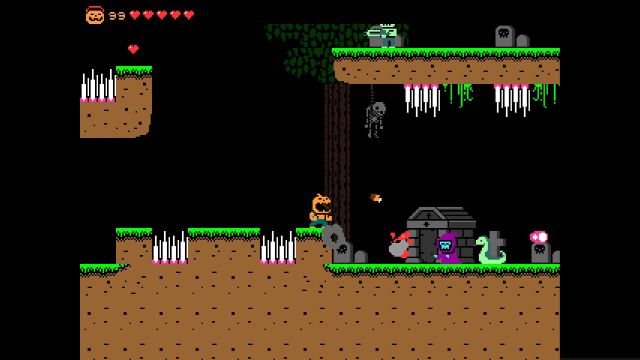 4k-worthy presentation with gorgeous, photo-realistic environments and lifelike facial expressions? You won't find those here, as Halloween Forever more closely resembles an early NES action title. Its gruesome sprites are simple and (in some grotesque way) adorable. Basic horror locales comprise Pumpkin Man's world, from blood red castles to haunted graveyards. Every stage possesses a little background imagery that scrolls independently from the foreground, but too often you glimpse plain black walls or horizons. I mean, I'm not asking for da Vinci-esque detail, but a more lively/creepy backgrounds would have improved the experience a tad.

Deep combat? Please... You only receive two action buttons in Halloween Forever: one that executes a jump and one that vomits candy. Your shots fall in a downward arc from Pumpy's mouth, so you need to take that into account as you engage enemies. Most of your foes perish with a blow or two, which keeps the action moving at a terrific pace. However, creatures don't simply pop up at random or line up and await death. They sit at key points on ledges or patrol specific areas, making them handy obstacles.

Such foe placement is elementary-level material for a 2D platformer, though. Halloween Forever moves beyond rudimentary design by offering fairly elaborate, challenging levels packed with hazards, branches and tricky set pieces. Stage three, for instance, sends you through a torture chamber of sorts, decked out with Thwomp-wanna-bes, blade traps rigged to platforms, killing spikes, fire-breathing statues and legions of the undead. You bounce and weave through several of these dangerous segments, hoping you don't misstep and end up either dying or losing some of your energy. If nothing else, you'll at least be glad Halloween Forever sports tight, perfectly responsive play control, so you can't blame the game for your mistakes. Clearly, these segments mean to chip away at your health, if not kill you, and care and precision become your greatest allies during this test. 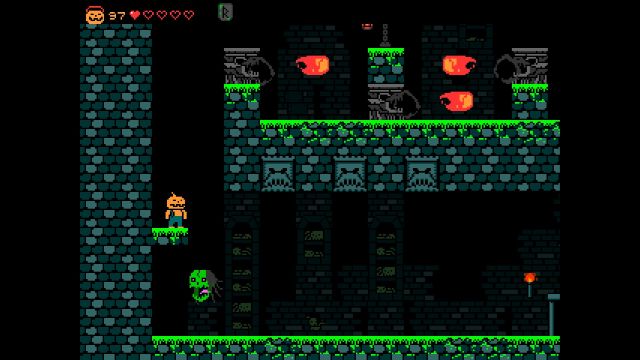 You'll need all the energy you can get in stage three, too, because those miles of punishment culminate in an intense boss encounter. You enter a room with a few platforms, populated by a giant skull with eyes protruding from its sockets. The eyes wiggle free and chase you while the skull floats counterclockwise around the arena. Whenever you stop to fire at your opponent, his eyes gain on you. You end up scrambling all over the place, only taking choice potshots when you're able. Survive that battle and you might stand a chance against Halloween Forever's other rogues, including a leach-like monster, a jumping giant, a massive frog wearing a crown and your arch nemesis, Necroking himself.

Unlimited lives? Try three lives on default setting, and no saves, passwords or continues to serve as a safety net. If any factor brings Halloween Forever dangerously close to obsolescence while committing fully to its retro elements, this is the one. It's been a dog's age since we've seen a platformer this uncompromising. Halloween Forever may not be all that tough in and of itself, as it features tight play control and situations you can easily solve by examining them and taking your time. However, surviving the whole campaign on three lives is a face-breaking labor that only great gamers will surmount. Thankfully, Halloween Forever isn't a complete monster, as it offers the option for ninety-nine lives. However, when you activate that mode, achievements become temporarily unattainable.

You only have to pound through five levels, too, and you must complete the whole campaign in one sitting. The whole shebang shouldn't take you longer than an hour, provided you survive all five onslaughts. If the lack of content disappoints you, bear in mind that Halloween Forever loads you up with hidden goodies, including unloackable characters and special runes that display the campaign's true ending. 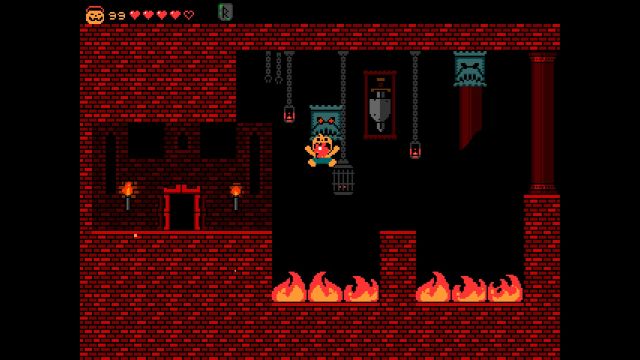 Wait, actually it does. I'm still trying to wrap my mind around this one, but Halloween Forever eschews pausing. Granted, it's not difficult to find a safe place to sit, and there are no time limits, so a pause feature might seem redundant. But sometimes you've really got to hit the bathroom and you're in the middle of a conflict with a tough boss. You don't want to die, but you don't want to wet your pants or attempt to pee in a nearby bottle, either.

The lack of a pause button didn't break the spell Halloween Forever cast over me, though. The game offered me a quick thrill that felt like the kind of spooky quest I would've rented twenty-seven years ago. Visually and mechanically, it played like the games of yore without feeling too old fashion. It threatens you with skull-smashing challenges, but also provides you with options to dull the challenge factor at a cost, if you so please. Truly, Halloween Forever emulated old school qualities without being stuck in the past. Few modern retro platformers have the right to boast such a feat, but Halloween Forever definitely earned it.

If you enjoyed this Halloween Forever review, you're encouraged to discuss it with the author and with other members of the site's community. If you don't already have an HonestGamers account, you can sign up for one in a snap. Thank you for reading!

© 1998-2021 HonestGamers
None of the material contained within this site may be reproduced in any conceivable fashion without permission from the author(s) of said material. This site is not sponsored or endorsed by Nintendo, Sega, Sony, Microsoft, or any other such party. Halloween Forever is a registered trademark of its copyright holder. This site makes no claim to Halloween Forever, its characters, screenshots, artwork, music, or any intellectual property contained within. Opinions expressed on this site do not necessarily represent the opinion of site staff or sponsors. Staff and freelance reviews are typically written based on time spent with a retail review copy or review key for the game that is provided by its publisher.