Over the last two decades, our world slowly has fallen victim to a "zombie apocalypse apocalypse." You can throw a stone in any entertainment-related shop or digital marketplace and hit dozens of stories about the dead rising from the grave and conquering the world. Undoubtedly, that hypothetical rock would nail a few works by George A. Romero and Lucio Fulci, rebound off a series of YA novels, chip a zombie novelty item, then soundly smack a comic book series before dinging several video games. Needless to say, zombie fatigue has recently set in for a lot of us, replacing everyone's apparent aversion to vampires. The population's sudden desire to avoid almost anything zombie-related is understandable, though.

Although the category is way past saturated, fresh, quality pieces of zombie media still occasionally creep into the streets and sink their teeth in unsuspecting pedestrians. To wit, the twin-stick shooter Riddled Corpses EX lurks in the avenues of PSN. This digital indie title combines the aforementioned ghoulish takeover plot device and combines it with old school, top-down mayhem seen in games like Smash TV and Total Carnage. You control a super-deformed human named Jon, armed with a rapid-fire blaster and bottomless ammo. The walking dead spawn all over the battlefield, usually arriving by way of a coffin that bursts from the earth or a demonic cocoon that phases into existence. As with any twin-sticker, you mosey about the fray with one analog stick while aiming and auto-firing with the other.

The campaign kicks off modestly enough. Stage one puts you in the middle of a ruined city street strewn with cars and burning garbage cans. Adorable undead sprites, both human and canine, aim to snack on your warm, living flesh. One touch from a foe deducts one life from your store of three, leading to a "game over" when all of those disappear. As you pump bullets into the horde to prevent life loss, you realize they aren't falling all that quickly. Sure, you're dealing enough damage to eliminate handfuls of them, but you know they're going to overwhelm you sooner or later. 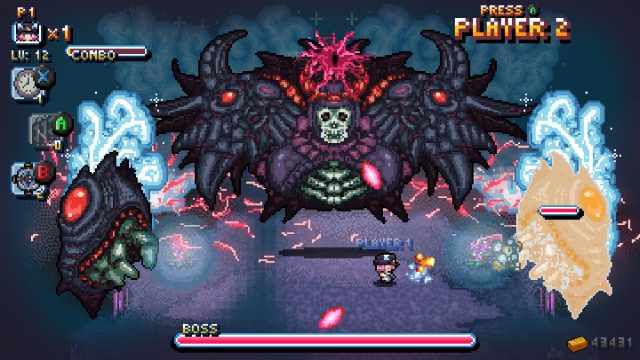 Good news: destroyed ghouls leave behind piles of gold. After you become an evening snack (and you will, believe me), you return to the main menu with all of your gold intact. You can then enter a shop that allows you to buy permanent upgrades for Jon, unlock new characters or obtain special consumable items. Each new combatant you earn comes with their own perks and drawbacks. In some cases, a character might possess an outstanding rate of fire and walking speed, but dish out less damage per bullet. However, after a few level-ups, that person could outclass her peers in terms of damage per second.

Impressively, Riddled Corpses avoids the main issue that plagues many non-RPGs when RPG elements come into play. In some action titles, especially brawlers/RPG hybrids, your character becomes too powerful and their respective adventure devolves into wars of attrition. Riddle Corpses sidesteps this dilemma by providing you with mountains of zombies, gigantic adversaries, environmental hazards and flying projectiles to avoid. The action never slows or lags, so enemies keep coming at frightening speed and you can't blame faulty animation on your missteps. Leveling up may boost your damage rating and speed, but it doesn't improve your ability to dodge veritable mosh pits of nightmare fuel or withstand physical punishment. Riddled Corpses wisely eschews an energy bar and a defense stat, thus preventing it from developing into a just another mindless shooter.

You're going to need all of the upgrades and items you can get, too. Even the first level eventually pits you against massive, muscular monsters that wander amid the swarms of standard zombies. After three or so waves of these beasts, the stage takes you to a rotating pentagram that signifies the entrance of the level boss. A necromancer or lich of some sort appears and summons two of the previous discussed steroid-infused freaks, as well as minor goons. After some damage, the lich transforms into a bloated piece of rotting flesh that looks vaguely human and sprays bullets. 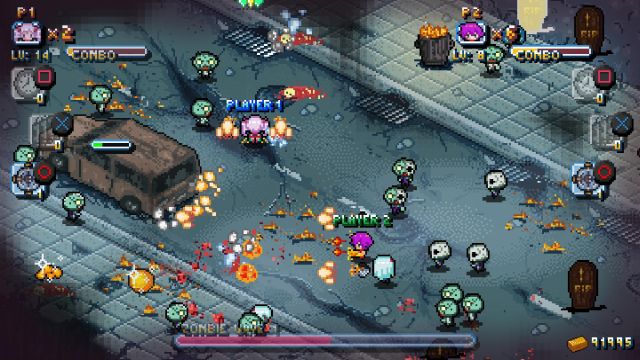 Riddled Corpses dances a line between charming and horrific, displaying both cute pixel art and monstrous designs that would make Tom Savini blush. You'll blast through miles of undead clowns, face off against tremendous skulls that protrude from the ground, gun down winged imps, re-kill huge rotting corpses and eventually face off against a floating monstrosity at the climax of level four, complete with separate destructible hands. Each of these fiends await you after you cross the first finish line. Thankfully, each subsequent level unlocks after you've reached it, allowing you to restart where you left off rather than beginning the campaign anew. That way your hard work won't go waste, and you can more easily venture through a desert teeming with killer plants or shoot demons from a speeding vehicle.

Yeah, Riddled Corpses is an action-packed and challenging ride, but I'm not going to pretend I didn't want to pull my hair out a few times. By level four, the crowds become tricky to manage. The second and third waves of that stage push you to the limit, practically requiring you to either buy extra lives and power-ups (including dynamite that serves as a smart bomb and a clock that temporarily stops all targets) or hope tons of those goodies spawn on the battlefield. Even then, the gauntlet leading up to the fourth boss is a hell of a knock-down, drag-out that's equal parts exciting and frustrating. 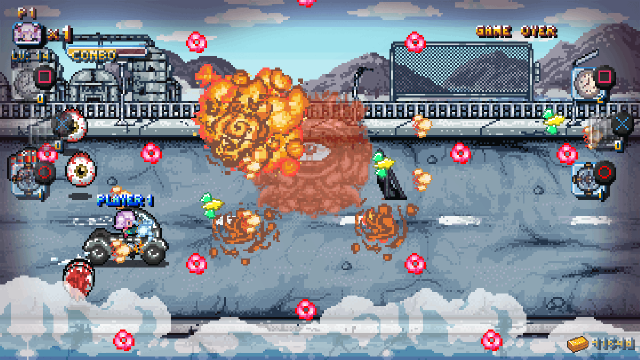 Level five, which is the final challenge, flat out overwhelms you. It doesn't even seem possible to survive this portion of the quest without taking damage, requiring you to purchase most of the goods from the store to see if any of them grant you the edge that you desperately need. However, additional characters and power-ups require thousands of gold pieces to buy, plus their upgrading costs demand a steady money flow. Granted, one of your selectable heroes nabs twice the money per pick up, but even then you're looking at a lot of cash farming.

Personally, I wasn't too bothered by the farming required. Riddled Corpses EX provides enough simple havoc that the act of dispatching sizable hordes of zombies is cathartic, even zen-like at times. Its thrilling, albeit short, campaign also loads you up with enough nail-biting moments and close shaves to make up for some of its late-game grinding. The endless fields of slaughter, old school style, high challenge factor and remarkable stability ensure the game is an indie faux-retro zombie experience well worth having.

If you enjoyed this Riddled Corpses EX review, you're encouraged to discuss it with the author and with other members of the site's community. If you don't already have an HonestGamers account, you can sign up for one in a snap. Thank you for reading!

© 1998 - 2022 HonestGamers
None of the material contained within this site may be reproduced in any conceivable fashion without permission from the author(s) of said material. This site is not sponsored or endorsed by Nintendo, Sega, Sony, Microsoft, or any other such party. Riddled Corpses EX is a registered trademark of its copyright holder. This site makes no claim to Riddled Corpses EX, its characters, screenshots, artwork, music, or any intellectual property contained within. Opinions expressed on this site do not necessarily represent the opinion of site staff or sponsors. Staff and freelance reviews are typically written based on time spent with a retail review copy or review key for the game that is provided by its publisher.