At the time of this writing, Hello Kitty Kruisers is listed on eBay for an average price of around $100. Over on Amazon, one particularly ambitious seller is seeking closer to $140. All of those listings are for the Wii U version of the game, which apparently has managed to go rare. I wouldn't mind owning that edition, the better to complete my library of games for that hardware, but recently I saw that Rising Star has published the title on the Nintendo Switch. I figured that would satisfy my curiosity and require significantly less of my wallet. So I bought the new release, and the overall thought I would like to share first as I get started with this review is that I'm happy I didn't spend more than $32 to acquire what I feel is a thoroughly mediocre mascot-based kart racer.

Hello Kitty Kruisers lets as many as four players race through four circuits located within Sanrio's popular Hello Kitty universe. Those players assume the role of various popular characters, plop themselves in karts alternately suited for racing on land, sea or in the air, and then attempt to be the first one to cross the finish line on the third lap. Their efforts are aided by the use of a variety of projectile weapons, boosts, shields and other helpful effects. 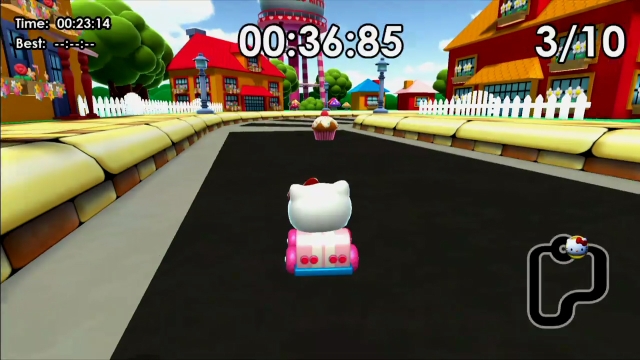 As dull as I've probably made all of the above sound, I think such designs are actually pretty neat when they're properly executed. I have enjoyed numerous kart racers over the years. Some of the Mario Kart games rank among my favorite experiences within the medium, and Sonic & All-Stars Racing: Transformed is one of the genre's standout efforts, as well. But I can't heap that sort of praise on Hello Kitty Kruisers, which features too little variety, too little polish and too little incentive to keep playing beyond the first hour or so, especially when there are more compelling kart racers readily available on the same hardware.

Hello Kitty Kruisers is an almost attractive game, on one level. The simple art and vivid colors are reminiscent of Matt Groenig's Springfield, and the characters are sufficiently adorable that I grew to like them in spite of my lack of familiarity with the intellectual property from which they come. Draw distance seems fine, especially since the courses are on the small side and fairly confined, and the cheery veneer is a welcome change from the medium's darker tendencies. Unfortunately, assets are frequently reused. The net effect is that it feels like you're racing through only four or so unique tracks during the entire time you play the game. Maybe they are mirrored, or maybe you pilot a different vehicle, but it's hard to escape the sense you are simply going through the same familiar motions time after time, circuit after circuit. And like I said, there are only the four circuits. You can race through every track in less than an hour and unlock pretty much everything in the process. Then the only reason to keep going is if you have a few friends around who prefer Hello Kitty to Mario or Sonic. By like... a lot. 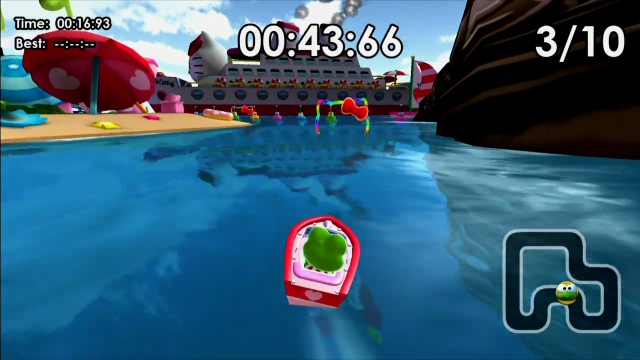 I do appreciate that Hello Kitty Kruisers lets players control cars, boats and planes, but that never feels dynamic the way it did in Sumo Digital's ode to Sega's blue hedgehog. You don't transform or encounter morphing environments, so races more closely resemble a third-rate clone of Diddy Kong Racing. However, the going is much slower in spite of the more advanced hardware the developers had at their disposal. Even the slowest circuits in any of the Mario Kart titles feel somewhat speedy in comparison, and there's certainly no equivalent to Mario Kart 8's ridiculous 200CC mode. The game chugs along badly enough when moving at a snail's pace.

I've played kart racers with horrific controls, and Hello Kitty Kruisers doesn't quite qualify for that description, but neither does it feel finely tuned. Vehicles are slow to respond to any commands for a tight turn, especially if you don't make use of the game's attempt at a drift mechanic. By holding a shoulder button, you can turn rather more sharply, and then you can release it to straighten your course again. It feels jerky at the best of moments, and I have a hard time adapting to the set up after playing so many games where drifting felt like, well... like drifting. 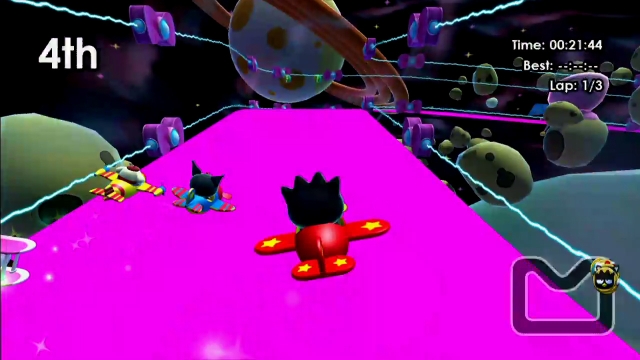 As I noted above, the game often seems to chug, even though it really shouldn't. There aren't a lot of racers to keep track of, after all, and it's not like your opposition shows any signs of running complicated AI routines in the background that might hog resources. When my friends and I played, we often lapped some of our opponents, or found them driving backwards or just getting hung up on walls. Clipping and other similar issues arose periodically, which prevented the smooth and pleasant experience that should have existed from ever quite materializing. I really can't explain the plodding pace. Even little kids like to go fast, right?

Hello Kitty Kruisers would probably qualify as a pretty but somewhat shallow racer if it had been released a couple of decades ago. Today, it is a mostly underwhelming jaunt that doesn't last long enough or do enough with its brief run time to warrant a recommendation as anything but a budget purchase. Small children might find it amusing for a bit, but even they are likely to give up in favor of Mario Kart unless they're serious Hello Kitty fans. And even then, I have to imagine there are other experiences with the irrepressible feline that would better justify the sticker price. I feel kind of bad for collectors who spend $100 or more just so they can say they own this game's Wii U version. I hope I won't ever be one of them.

If you enjoyed this Hello Kitty Kruisers review, you're encouraged to discuss it with the author and with other members of the site's community. If you don't already have an HonestGamers account, you can sign up for one in a snap. Thank you for reading!

© 1998-2021 HonestGamers
None of the material contained within this site may be reproduced in any conceivable fashion without permission from the author(s) of said material. This site is not sponsored or endorsed by Nintendo, Sega, Sony, Microsoft, or any other such party. Hello Kitty Kruisers is a registered trademark of its copyright holder. This site makes no claim to Hello Kitty Kruisers, its characters, screenshots, artwork, music, or any intellectual property contained within. Opinions expressed on this site do not necessarily represent the opinion of site staff or sponsors. Staff and freelance reviews are typically written based on time spent with a retail review copy or review key for the game that is provided by its publisher.