The name Suda51 has been attached to some very interesting, oddball projects, most notably No More Heroes, Lollipop Chainsaw, and Killer7. Though, ask someone to discuss any of his earlier works, and you'll likely get a muted response. Considering Suda51's initial projects have stayed Japanese exclusives, this is a given. However, an instrumental release has been given the remastered treatment, and this one actually made it outside its native country. Originally released in 1999 on the original PlayStation, The Silver Case marked the debut of Grasshopper Manufacture, a company created by Suda51 after having departed Human Entertainment.

Due to budgetary reasons, The Silver Case was created to be a story-driven, adventure-style game in the same vein as PC titles where you have to select several menus and options just to interact with one object. The plot, focused on the Heinous Crimes Unit during their investigations within a Japanese dystopian ward in the year 1999, is mostly told through a barrage of drawings overlapping one another. With the aid of these drawings, players delve into a twisted world of betrayal, corruption, and conspiracies aplenty, and they're centered around or, at the very least, influenced by a serial killer named Kamui. Him and his enigmatic special ability called criminal power, as the game lovingly labels it. 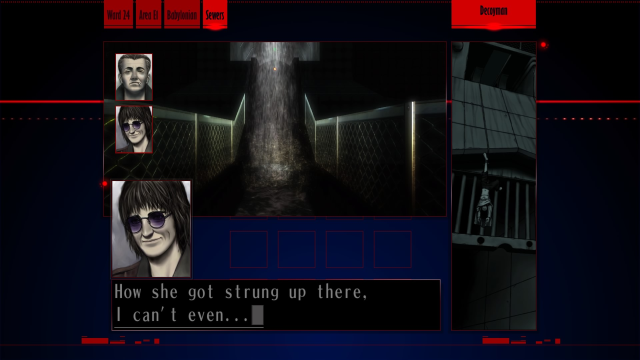 While images make up a huge portion of the narration, the devs have inserted varying approaches to the genre, mixing and matching, such as live-action videos, animated cutscenes, and some very rare use of CGI clips. Also, when you're given the option to explore your surroundings, they're actually 3D environments. Though, there's no 3D human models ever in these scenarios, and the closest you get to seeing "living" entities are car models driving on looped backdrops. These various methods and styles are just a few examples originating from Suda51's desire to create something unique within the medium... along with something that could stay within the small team's budget; a reoccurring "motif" that stuck with a few Grasshopper Manufacture releases following The Silver Case.

Interestingly, the port crew had to go through a couple hurdles for the remastered release. Grasshopper Manufacture lent the original assets to the team, but huge chunks still had to be redone, such as modifying the interface to make it a tad more friendly, recreating certain scenes, and even having to convert audio from the PlayStation 1 version, due to the original source being lost. While the sound is fine, the visual alterations make for an abnormal experience, as you'll witness clean images seguing into blurry live-action video, followed by new, clean video, back to more blurry video, and then back to clean images. While that may sound off-putting, it's actually not so bad. It's endearingly jarring.

The playthrough itself is also jarring. Minus the affection. And the "not bad" part.

The Silver Case's biggest problem is that it intentionally pads out the story and outstretches build-up, and normally does so with unneeded video game segments. That's not a joke: actual video game elements in a video game... actually hurt the video game. This stems from the fact that the game typically, but inconsistently, follows your character, an agent assigned to the unit after having survived a slaughter from his previous squad, in a first-person perspective. In doing so, the devs force you to do mundane stuff that would likely be skipped in a show, movie, and the like. Such examples include knocking on all doors at an apartment complex... multiple times, doing a floor-by-floor sweep of a government building... where all the rooms are modeled the same way, and, my absolute favorite, spending nearly an entire chapter waiting at your apartment for an acceptance email. 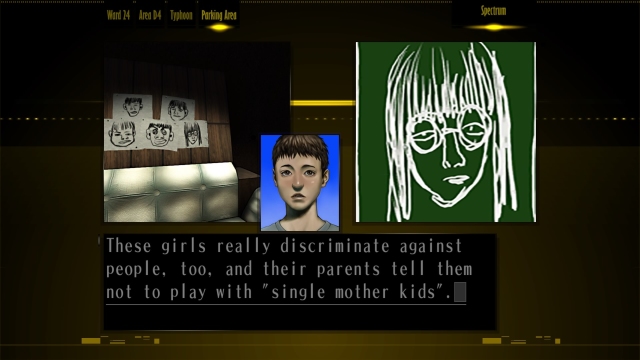 It doesn't help that, when you finally do get to look around and interact with stuff between conversation pieces, it's just artificial freedom. Nine times out of ten, there's really only one thing you're allowed to interact with in any given area, which they make extremely obvious with floating markers on specific spots. It's legitimately impossible to mess up or get lost in this game, as invisible barriers, accompanied by NPCs scolding your actions, restrict movement. That, or how you're greeted with a non-response for having knocked on every door in an apartment complex. You know what's really irritating? There are plot-related moments in The Silver Case where your character is forced to make a "Yes or No" response, with even your co-workers yelling at you to make a choice... and the game still makes the decision for you.

The Silver Case was badly in need of an editor. Or, at the very least, and I can't believe I'm saying this, someone from the publisher company complaining about this stuff.

It's such a pity, because the way the plot, its characters, and dialogue is written can be very compelling in some spots. While the Heinous Crimes Unit has six members, not counting yourself, you'll get to know two specific colleagues the most: the well-worn, mouthy, experienced Kusabi and his younger partner, the straight-edged Sumio. Before you even get to know them personally, you can already tell those two do a lot of bickering when meeting them for the first time. Sumio tries his best to keep focused on investigations, but Kusabi constantly rambles on and threatens to kill his partner when ticked off, which then causes Sumio to spiral into a cussing match with him. However, you can tell they have reverence for each other, because between all the arguing they do, there are very brief instances of respect littered in their dialogue.

I will also take this moment to declare Kusabi the most entertaining character in all of The Silver Case, purely on the way he speaks. There's no filter, which invites some very colorful language. I think the first time he made a distinct impression on me was in the very first chapter, when, and excuse the language, he uttered, "These pieces of shit are fucked in the head. So don't leave even a bit of skull. Wipe them the fuck off of this plane of existence!" Which was then followed by rapid gunfire into an already dead person. 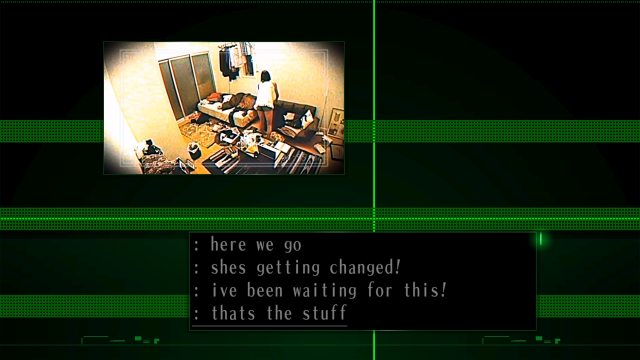 Furthermore, through its stories, the game explores themes you typically wouldn't experience in video games, though a reoccurring one happens to be loss of innocence. One chapter revolves around the disappearance of a kid's friend; between the repetitive door-knocking simulations, you'll go through the gauntlet with this kid as he spills his life story to you in a futile attempt to help find his missing companion. It's quite the heart heart-breaker. Other such themes involve uncovering corruption that literally ruined an entire village, which is shown in black and white noir visuals, and even a whole chapter dedicated to Internet culture. Considering the latter was written during the late 90s, it's actually very interesting just how much has stayed true two decades later, from elitist chat rooms and cruel anonymity, to non-consented, live voyeurism and doxing.

Unfortunately, whenever I think of these exemplary moments, I can't help but think of more issues with The Silver Case. They seriously go hand and hand. The "standalone" chapters, for instance, are a nice attempt to expand the game's universe and flesh out its main cast... but it doesn't really work within a game that's essentially a short story. There's a total of six main chapters, and these "filler" chapters are placed right in the middle, disrupting the main plot. It just feels as if it's trying to be too grandiose for its own good, too forced, and too much of an attempt to lengthen the playthrough so it doesn't come off brief. This seems more apparent with the side-story chapters, which follows a reporter covering the Heinous Crimes Unit's exploits from a distant point-of-view.

Now, the thing about these side-stories is that they're incredibly boring, because... they just force you to read a bunch of emails. You can't even read the emails without hassle, since the game throws you into trivial segues, such as getting up from bed and staring at your pet turtle, going to a bar and talking about woes, and occasionally, briefly talking to Kusabi about nothing. These segments typically take one to two minutes of your time, before it's back to more email reading. They're sterile experiences, and you usually know how these events unfold since you already played them in the main chapters! But the biggest, most annoying aspect of these side-stories? They're optional. Why is this annoying? Because some of these stories reveal major plot twists that are never mentioned in the main chapters.

Let me follow that up with a kick to the shins: this remastered version has a new epilogue that bridges the gap with its sequel, The 25th Ward. The only way to witness this epilogue, which lasts less than 10 minutes, is to complete every chapter, including the side-plots. That's downright masochistic. 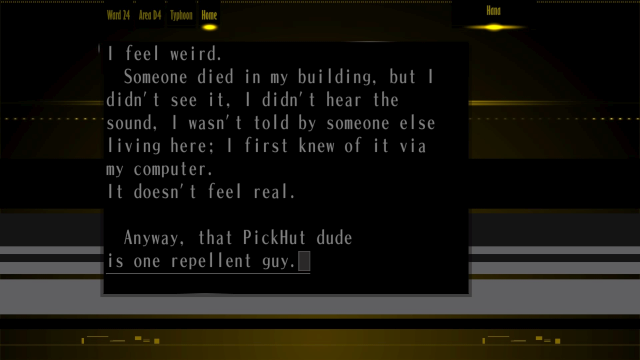 The Silver Case is one of the more surreal, plodding experiences I've had playing a video game. Not even halfway through my playthrough, I already realized how absurdly irritating it was going to be, but I intentionally suffered through the whole thing. Because when the game worked, whether it be with Kusabi's lively language, the way dialogue is written to make these characters feel way too real, or just a distinct style used in a very specific situation, the game truly shone in those instances. But, as if joined by the hip, its constant wave of problems kept rearing their heads to stain these moments. Worse, these issues showed up so much, that it made me start believing the game's best qualities were nothing but freak accidents. A damn shame how The Silver Case's erratic imbalances led me to such a thought...

If you enjoyed this The Silver Case review, you're encouraged to discuss it with the author and with other members of the site's community. If you don't already have an HonestGamers account, you can sign up for one in a snap. Thank you for reading!

© 1998-2021 HonestGamers
None of the material contained within this site may be reproduced in any conceivable fashion without permission from the author(s) of said material. This site is not sponsored or endorsed by Nintendo, Sega, Sony, Microsoft, or any other such party. The Silver Case is a registered trademark of its copyright holder. This site makes no claim to The Silver Case, its characters, screenshots, artwork, music, or any intellectual property contained within. Opinions expressed on this site do not necessarily represent the opinion of site staff or sponsors. Staff and freelance reviews are typically written based on time spent with a retail review copy or review key for the game that is provided by its publisher.