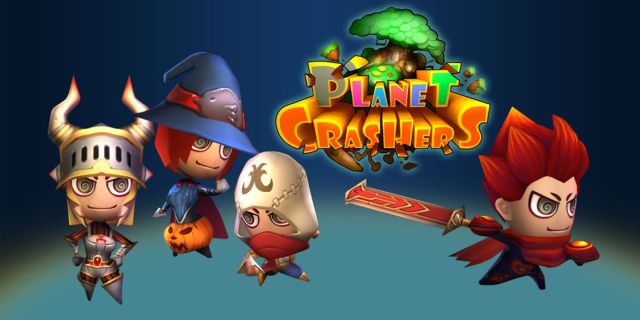 If you fire up Planet Crashers expecting a deep RPG with a moving plot and unforgettable characters, you will be disappointed. Honestly, even if you're just looking for a light dungeon crawler with decent customization, a balanced challenge factor and some meaningful loot, the game will let you down. Heck, if you anticipate anything more than the most basic role-playing experience around, padded with meaningless tasks and cringe-worthy content, then Planet Crashers will prove dissatisfying.

The game's brief introductory cutscene serves as your initial warning that something is amiss. An obnoxious jester-like character named Jinkle-bottom breaks into your house to inform you that a vague, villainous entity lurks several planets away, and that someone selected you to battle the beast. He also lets you know that you must embark on an interplanetary adventure that is intended to prepare you for the coming showdown. In other words, the game wants you to grind until you're blue in the face. Promptly thereafter, the jester disappears and the campaign commences without fanfare or drama.

And man, I know this is a small gripe in the face of larger qualms, but Jinkle-bottom is annoying. I don't know if it's just me, but every time I read *jinkle* in his dialogue, I want to punch my 3DS screen. Should I seek help? Probably...

If you're anything like me--and heaven help you if you are--you'll decide to humor Planet Crashers in spite of the warning signs. You'll exit the house and wander around your diminutive home world, finding little to do but purchase basic items and exchange flavorless dialogue with NPCs. Thankfully, chatter isn't always pointless, as some NPCs aid you in advancing the campaign. These guys beg you to fetch items, locate lost friends or pulverize bullies who terrorized them. Quest completion nets you new weaponry, skills and/or experience points. At first, Planet Crashers plays like a proper minimalist RPG, thanks mostly to these simple missions. However, as you progress, the game's shallowness becomes all the more apparent... 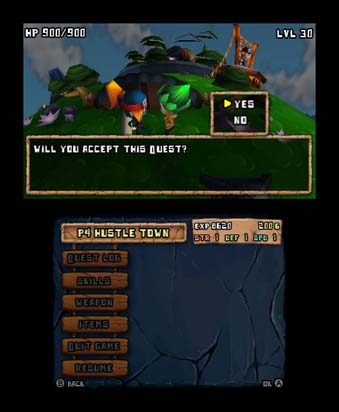 None of the jobs offered evolve in any meaningful way. If you've completed one fetch quest in Planet Crashers, you've basically completed all of them. The game adds no further constraints or twists, aside from leveling up the enemies and bosses you encounter along the way. As you can tell, the campaign grows mind-numbing to the point that it's almost difficult to finish. I had to push myself through the final two planets, and came dangerously close to quitting out of boredom during the final phases. It's not like there was some gripping plot strand that begged to be tied up, anyway.

Each task you accept sends you into one of three procedurally-generated dungeons present on a given planet. Any good RPG that features randomized stages finds ways to surprise, amaze or challenge you. Planet Crashers accomplishes none of the above feats, as it sports levels composed entirely of plain hallways and rooms. Each chamber and corridor stands devoid of special characteristics. Even traps or beneficial features, like restorative fountains, are missing. Every dungeon functions in this way, which means any one dungeon you might explore is structurally indistinguishable from the next.

Each room contains an enemy or two, represented by a human NPC who rushes towards you as you enter. As they collide with you, the game transitions into a turn-based battle segment that borrows a note from Super Mario RPG. Now and then, button prompts pop up, allowing you to boost your damage rating if you press the displayed button at just the right time. This feature breaks Planet Crashers' tedium at first, but isn't enough to stem the growing monotony of plowing through absolutely minimalist tasks and dungeons ad nauseam. 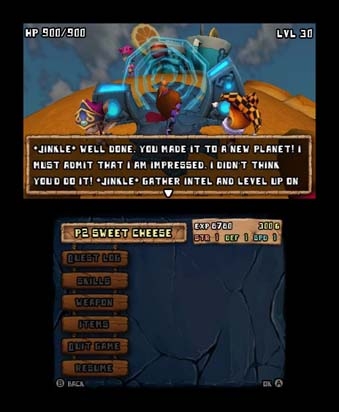 Every battle is more or less the same, providing few opportunities to alter your strategy. Though you can equip various combo attacks, you always wind up using the most powerful one in your library to either soften up or finish off your opponents, only breaking to recover HP. After a while, you become so powerful from grinding and farming weapons that random encounters devolve into squash matches against pitiful opponents. In fact, they become so easy that it's more worthwhile to skip them entirely. You'd think that an RPG whose main emphasis is grinding like crazy would feature combat so addictive that you wouldn't want to miss any of it. So much for that...

If you were bent on amassing an impressive collection of armor, accessories and weapons with ridiculously long monikers like Magical Dead Fish of Glorious Flames+5, think again. The only piece of exchangeable equipment is your weapon, which is usually something odd like an umbrella or a massive bone. Cosmetic differences aside, weapons only differ in terms of strength ratings. No weapon features any deeper factors to consider like status effects, combat bonuses, or stat trade-offs (i.e. -5 to speed, but +10 to strength). Each one may as well be Weapon +10, Weapon +20, Weapon +30 and so on.

Planet Crashers eventually grants you access to its not-so-grand finale. You engage the main antagonist in a straightforward scuffle, emerge victorious and receive an apathetic, one-size-fits-all ending. All of those hours you spent delving into simple labyrinths, dispatching primitive goons and earning giant household objects nets you little more than a light pat on the back.

Planet Crashers is a rare beast. It isn't mechanically broken, but it's still an abysmal title. It bears no redeeming qualities, and offers no meaningful or entertaining content. Its only material consists of the most standard RPG elements that mountains upon mountains of other titles--even some big time stinkers--have executed more effectively. Its campaign is akin to playing the introductory segment of the original Final Fantasy for twenty or so hours. Honestly, I don't recommend downloading Planet Crashers whatsoever. There are scores of superior RPGs waiting to devour your free time, and some of them are freeware.
2/5

If you enjoyed this Planet Crashers review, you're encouraged to discuss it with the author and with other members of the site's community. If you don't already have an HonestGamers account, you can sign up for one in a snap. Thank you for reading!

© 1998-2021 HonestGamers
None of the material contained within this site may be reproduced in any conceivable fashion without permission from the author(s) of said material. This site is not sponsored or endorsed by Nintendo, Sega, Sony, Microsoft, or any other such party. Planet Crashers is a registered trademark of its copyright holder. This site makes no claim to Planet Crashers, its characters, screenshots, artwork, music, or any intellectual property contained within. Opinions expressed on this site do not necessarily represent the opinion of site staff or sponsors. Staff and freelance reviews are typically written based on time spent with a retail review copy or review key for the game that is provided by its publisher.