Omensight doesn't exactly tell your standard warm, fuzzy tale. The narrative features a cast of cartoony, anthropomorphic animals who wage a bloody war against each other. An avian emperor invades a rodent country, backed by an army of cats and dogs. Given a recent turn of events, the ruler stands poised to secure the country Rodentia. However, as the conflict builds to a climax, both armies fall prey to cataclysm. A mysterious force literally rends the world asunder, everyone dies and no one wins.

All is not lost, though. A witch dwelling outside the bounds of time and space summons a spectral guardian to put things right. You take the role of that warrior, the Harbinger, and your goal is to prevent the coming calamity. According to the witch, there seems to be one event tied to doomsday: the murder of the Godless-Priestess Vera. Not only do you take up the role of swordsman, but also that of detective. The witch allows you to return to the morning of the final day by visiting one of two characters with whom you've formed a bond. By palling around with one of these two, you establish possible motives of the suspects and pick up shreds of information that further develop the plot behind the murder.

And oh, what a plot it is! Omensight spins an entertaining yarn full of lively characters. Terrific voice acting brings each role to life as you unravel dark secrets and fears. Twists and turns abound throughout the campaign, as well. Heroes lie, villains become allies and each revelation hides another turn of events you may not have considered. As cliche as it sounds, Omensight's storyline always keeps you guessing and wondering what will happen next. 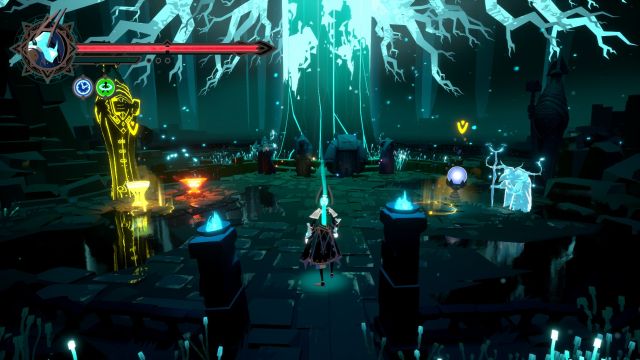 Each return to the world of Urralia turns up fresh and useful leads that further your investigation. A couple of new allies emerge, each with their own side of the story. Their pieces of the puzzle, along with those of the previous two characters, provide you with new hints and seal rituals that grant you access to barred locales. The most useful discoveries of all, though, are called "omensights." These are mystic visions of the past that you can reveal to your assistants, providing them with bits of backstory they may not have known. Omensights trigger various reactions from your allies, beckoning them to take you to previously unseen parts of Urralia.

Unfortunately, the campaign makes you retread familiar territory too often. Don't get me wrong; Omensight's environments are gorgeous and decked out with wonderful details. However, it's disappointing when you revisit a stage for the third or fourth time and must pass yet again through corridors you've already visited. Thankfully, some of the game's segments allow you to skip to key events, thereby bypassing overly familiar real estate.

However, each journey ends in a familiar, melancholy fashion. After a handful of battles and travels across a few terrains, night eventually falls and the world ends again. You witness this startling phenomenon repeatedly, and it never gets any easier to watch. At one moment, you think you've made a breakthrough and you're about to crack the case, and then massive pillars of concentrated evil burst from the ground. You forge alliances and see divergent sides of characters, and you hope the arrangements you've just created endure. However, Urralia perishes and all of your day's work dissipates in a puff of smoke. Like Bill Murray in "Groundhog Day," you return to the hub and begin your work anew, fueled by the need to break the heart-rending cycle. 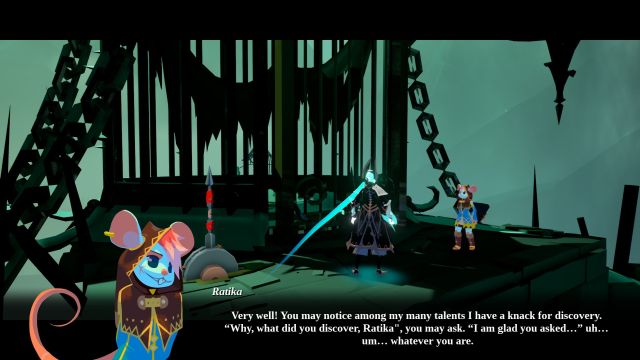 Obviously, not everyone wants you to succeed. Your partner's foes become your foes too, not to mention the demonic, fish-like entities that occasionally join the fray to ensure the world ends. Thankfully, the Harbinger came prepared to party. As with any worthwhile hack 'n slash title, Omensight features intuitive, combo-centered combat. You slice away at enemies, and each successful blow fills an energy meter. When crowds grow to overwhelming proportions, you can either use your energy to perform devastating maneuvers, or cast spells that grant you momentary advantages. There's nothing quite like dicing up the opposition, slowing time, launching a fireball, nailing a heavy target with an instant death attack and then dashing out of harm's way.

Omensight is not a mere button-masher, though. You need to pay attention to your adversaries, especially keeping an eye out for exclamation points that indicate when a soldier or monster plans to launch an assault. In between your regular slashes and killing strikes, you can expect to roll and side step all over the screen to avoid damage, usually at dizzying and impressive speeds. All the while, Omensight chugs along at a steady pace. Regardless of the number of troops you face, the game's mechanics nearly always remain steady and stable.

I do have one qualm with combat, though, which is that the game doesn't give you free control over its camera. For the most part, this gripe isn't really an issue because each section's camera perspective adequately displays your surroundings. However, during a few boss encounters, the camera serves only to screw you over. One fight of particular note places you in a crumbling battlefield, where columns fall over and destroy portions of the floor. Columns have a habit of toppling just outside of your camera's view, sometimes striking a tiny corner of a destructible patch of floor. One second you're cutting up the boss' minions or coming down off a leap. The next, you're unexpectedly plummeting to your death. Sometimes you might even get some good, hard licks in and just about kill the boss. Then the floor gives out beneath you, and you had no way of knowing it would happen because you can't rotate the camera and scan your surroundings. 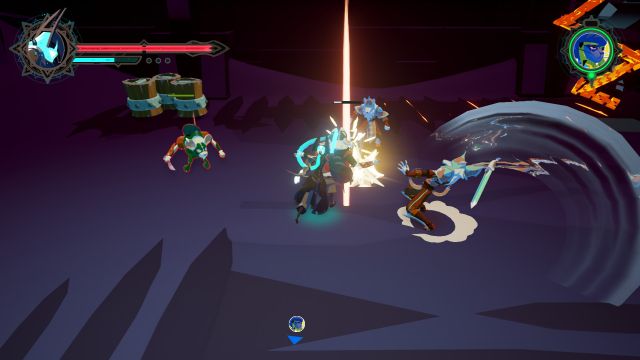 By now you're probably saying that there are plenty of hack 'n slash titles with stable mechanics and at least decent stories, so what makes Omensight special? The truth is the game is greater than the sum of its parts. The lovely graphics combine with an epic soundtrack to create a storybook-like experience. Grand environments and bits of narrative snap together to build an intriguing fantasy realm I hope to visit in future installments. Excellent little touches crop up now and then, from opposing soldiers exchanging words in battle to subtle changes that occur as you progress your study. The game doesn't beat you over the head with social commentary, but it also doesn't offer a skeletal tale that merely fills a void. From the time you select "new game," it seeks to immerse you in a world of wonder, and it succeeds gracefully.

Yeah, Omensight can be repetitive at times, and its camera is occasionally irksome. However, the overall experience outweighs those complaints. It doesn't reinvent the hack 'n slash adventure, but it stands as a wonderful, inspired addition to that genre. It's familiar in just the right way, and sports enough charm and character to keep you playing to its conclusion, even if that means watching the planet get blasted to bits several times.

If you enjoyed this Omensight review, you're encouraged to discuss it with the author and with other members of the site's community. If you don't already have an HonestGamers account, you can sign up for one in a snap. Thank you for reading!

© 1998-2021 HonestGamers
None of the material contained within this site may be reproduced in any conceivable fashion without permission from the author(s) of said material. This site is not sponsored or endorsed by Nintendo, Sega, Sony, Microsoft, or any other such party. Omensight is a registered trademark of its copyright holder. This site makes no claim to Omensight, its characters, screenshots, artwork, music, or any intellectual property contained within. Opinions expressed on this site do not necessarily represent the opinion of site staff or sponsors. Staff and freelance reviews are typically written based on time spent with a retail review copy or review key for the game that is provided by its publisher.