By the time Konami released Castlevania: Portrait of Ruin, they had just about run the 'Metroidvania' concept into the ground. Regardless, they decided to unleash yet another such game, and logically it should have been a complete flub. Somehow, though, Portrait of Ruin manages to work, mostly because it slightly strays from the formula utilized by its antecedents.

For starters, you control two different protagonists, reminiscent of the Genesis title Castlevania: Bloodlines. In fact, one of the player characters, Jonathan Morris, is the son of one of Bloodlines's heroes. Like his father, Jonathan wields the legendary whip Vampire Killer, but has yet to unlock its full potential. A distant relative of Sypha Belnades (Castlevania III: Dracula's Curse) named Charlotte Aulin also joins Jonathan. Like Sypha, Charlotte deals with various spells, from conjuring massive icicles to healing wounds and treating ailments.

However, Portrait of Ruin handles vampire-killing duo concept differently than its 16-bit predecessor. That is, you don't select one warrior and play through the entire campaign using only them. Rather, you toggle between the two instantly via button press. You can also summon your partner to assist you in battle, and even bark rudimentary commands at them. Best of all, the two of you possess double team attacks that crush the opposition like no other. If you desire some alone time, though, a simple button press tells your comrade to piss off. Suffice to say, Portrait of Ruin makes full use of its core concept.

An even bigger divergence from formula lies in the game's all around structure. In contrast to previous titles, Dracula's castle this time around is quite puny. It doesn't even occupy the entire map screen when fully explored, but only fills out about three-quarters of it. Thankfully, the lack of real estate on Drac's part doesn't signify a brief campaign, as Konami shrunk his abode to make room for eight alternate dimensions. You visit these worlds by leaping through bewitched paintings found throughout the fortress. This is a neat addition to the Castlevania experience, as each locale contains environments that otherwise wouldn't be found within the castle. For instance, one of the areas you explore is a pyramid, complete with trapped chambers and legions of mummies. Another level tosses you into an accursed circus that defies the laws of gravity, featuring an upside down "basement" and floors that run vertically. 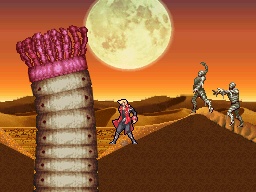 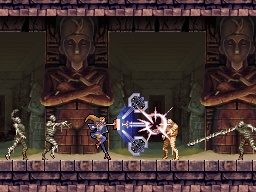 For long time fans, the first four stages are a breath of fresh air, and definitely the kind of addition the Castlevania's Metroid-like mini-series needed. Sadly, these stages will amp you up for the latter four paintings, which serve only to disappoint. As it turns out, paintings five through eight utilize environments rehashed from the original paintings. For instance, the level "13th Street" is just "City of Haze" with a darker skyline. Even the aforementioned circus reappears as a loop-shaped world called "Burnt Paradise." Although each of the stages' structures differ from before, the familiar sprites and environs threaten to tire players and ultimately cheapen the experience.


Right about now is when I usually start musing about boss battles and how they can render dull stages worthwhile. Unfortunately, Portrait of Ruin's boss lineup is hit or miss. On one hand, the game's bosses look pretty sweet. Many of them show off devious details and look as though they've been juicing since Dawn of Sorrow. Seriously, check out the werewolf when you get a chance. He's gone from your typical anthropomorphic canine to a hulking, snarling beast with talons that drip blood. Even big time classics like Medusa and the Creature received major overhauls. The former first appears to you in the form of a gargantuan snake, only to morph into an immense version of herself. From there she occasionally cuts loose a mighty ray as if she were a Dragon Ball Z villain, and then summons a whole cloud of Medusa-heads. The Creature, on the other hand, looks about the same as before, but sports some impressive modifications. Now and then he'll lift an arm and reveal a machine gun grafted into his elbow. His other arm is even worse, as it launches punishing rockets.

Portrait of Ruin's bosses look awesome, but fighting them is not as epic or memorable as it should be. Remember the team up attacks I mentioned earlier? As it turns out, you can easily beat most bosses by spamming the hell out of those. Team combos only consume a bit of your MP and only bars you from using the maneuver for mere seconds. Once the temporary restriction ends, you can execute the attack again and deal serious damage. Once you're out of MP, you can either consume a restorative item or equip accessories that boost MP regeneration. Even the final boss is no match for combo spamming, as I managed to crush him in a few short minutes without putting much thought into my actions. 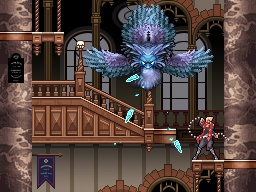 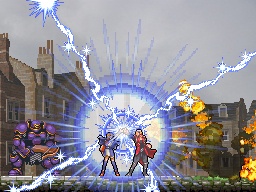 I originally wanted to write at length about the game's side quest system, where you receive quests from a character named Wind. Unfortunately, there isn't much to say about it. It's a neat addition, but like every other fresh feature offered in Portrait of Ruin, it isn't fully realized enough to add graciously to the experience. Mainly, Wind provides you with asinine 'fetch' quests or mind-numbing objectives, such as spending all of your money.

I wouldn't say that experimenting with new concepts entirely ruined Portrait of Ruin. I loved the game on my first playthrough, but subsequent revisits have shown me how tiresome it can be. Thankfully, the game's drawbacks are mostly benign. Castlevania: Portrait of Ruin is still enjoyable and a worthwhile addition to the franchise, but it doesn't measure up to most of its ilk.
3/5

If you enjoyed this Castlevania: Portrait of Ruin review, you're encouraged to discuss it with the author and with other members of the site's community. If you don't already have an HonestGamers account, you can sign up for one in a snap. Thank you for reading!

© 1998-2021 HonestGamers
None of the material contained within this site may be reproduced in any conceivable fashion without permission from the author(s) of said material. This site is not sponsored or endorsed by Nintendo, Sega, Sony, Microsoft, or any other such party. Castlevania: Portrait of Ruin is a registered trademark of its copyright holder. This site makes no claim to Castlevania: Portrait of Ruin, its characters, screenshots, artwork, music, or any intellectual property contained within. Opinions expressed on this site do not necessarily represent the opinion of site staff or sponsors. Staff and freelance reviews are typically written based on time spent with a retail review copy or review key for the game that is provided by its publisher.