When I first bought my PlayStation in the late 1990s, one of the neatest things about its CD technology was simply how easily I could obtain sneak peeks of games. Back in the day, I regularly purchased some PS-centric magazine featuring a monthly disc providing looks at several new releases. While most didn't really register with me, at most providing a brief diversion before eventually winding up in the trash, I do remember one disc fondly, as it contained a chunk of Spyro the Dragon.

Containing the first hub world, as well as one or two of its stages, it seemed to find its way into my system as much as whatever I was actually playing at the time. In that brief glimpse of the action, I had a blast controlling a small dragon capable of torching enemies with flame or simply bowling them over with a charging attack. The action was laid back, with the main objective being to collect all the gems scattered throughout simple, introductory levels littered with generally non-aggressive enemies. The music, composed by The Police drummer Stuart Copeland, was really nice and this game simply felt like a winner -- at minimum, an acceptable substitute for any Mario games I'd be missing out on because I picked the PlayStation instead of remaining with Nintendo.

And so, I rented it once, eventually purchased the second Spyro game and didn't even think about this one until a couple years ago when I randomly snagged it and then let it collect dust until I FINALLY decided 2018 was the year I'd give it a spin. If you can say one thing about me, it's that my brain is really great at avoiding logical progression!

So, how did the latest installment of "Games Rob Played 20 Years After The Fact" turn out for me? All things considered, pretty good. It should be said that Spyro the Dragon came out in the early days of three-dimensional platforming, which means that the controls and camera aren't quite at the standards we expect today, which led to some frustrating moments. Still, the overall experience was solid.

This game has the standard "minimum plot required by law" that one expects from the average mascot platformer. While being interviewed, a dragon issues a barrage of insults directed towards a charming fellow by the name of Gnasty Gnorc, which infuriates him to the point of turning every dragon in the realm into a statue except for the youthful Spyro, who was too short for Gnorc's magic to hit. Now Spyro must travel through multiple worlds to rescue his comrades, reclaim their gems and retrieve a number of eggs from thieves. 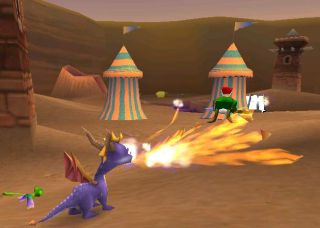 Each world consists of a hub containing a handful of levels to explore. While the second game's hubs were enemy-free zones, that isn't the case here. Sure, until you get to the third world, they're more likely to run away in terror than actually attempt to get in the young dragon's way, but they're still enemies! Much like the hubs, the actual levels start out simple with non-threatening enemies scattered throughout, but gradually get more and more complex, with monsters capable of posing a significant threat to your survival. With the exception of Gnorc's world, every hub contains three regular levels, one flight stage where Spyro is expected to soar around and flame various targets, as well as the boss level -- with his turf simply consisting of one large platform containing two regular stages, a boss level and a bonus level that only can be accessed by players skilled and persistent enough to collect absolutely everything over the entirety of the game.

Spyro has plenty of options when it comes to dispatching foes. A good number, particularly those found early in the game, can be defeated either by breathing fire on them or bowling them over while sprinting. Some larger enemies require fire, as they're too sturdy to be charged; while metal-garbed foes absorb fire and must be run over. A couple levels feature foes immune to both attacks; fortunately, by searching those stages you'll be able to find either supercharge ramps that allow Spyro to run fast enough to charge them or fairies that temporarily bestow a more powerful flame that can defeat most anything, as well as break down certain walls.

Admittedly, some of the game's challenges aren't quite as easy to enjoy now, due to the technological difference between modern systems and the PlayStation. Today, it seems that games can possess very effective cameras that allow players to easily scan in most, if not all, directions. Back when Spyro the Dragon was released, players had a bit less freedom to manipulate cameras as they saw fit and that camera could be slow to react to their movements, as well as frequently get "caught" on scenery. As someone who's been spoiled by more modern offerings, I found the flight stages to be annoying and frustrating and also struggled to get 100 percent of the goods in several levels due to being expected to do things such as take supercharge ramps down winding paths in order to gain the speed necessary to launch myself halfway across a stage. While not a game-ruining issue, since I wasn't trying to grab everything, it was a reminder that technology has improved to the point where certain older games can be more annoying to play now than when originally released.

Still, I was mostly entertained. Many stages were creatively designed, with numerous side paths leading to gem caches or secrets such as keys and rockets necessary to open certain chests. While the game didn't even reach an intermediate degree of difficulty until I was a fair ways into it, I was having enough fun simply exploring levels, dispatching enemies and searching for treasure to be overly concerned with how I was at greater risk of botching a jump, blundering off a ledge or inadvertently falling into water than getting killed by any of the game's foes. This is in part due to Spyro's generous life meter. Making the journey with the diminutive dragon is Sparx the Dragonfly, who changes color from yellow to blue to green as you take damage. After reaching green, one more hit causes him to disappear. This is both annoying, as Sparx grabs goodies when you're close enough to them, and worrisome, as one more hit will cause Spyro to lose a life. However, being able to take four hits in a game littered with both life-restoring livestock and plentiful extra lives ensures that a competent player will be able to see a lot of this game without enduring too much frustration. 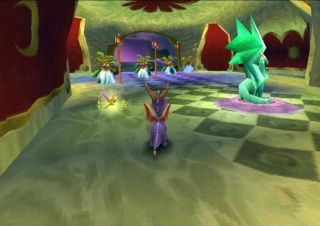 Having played the second Spyro game to its completion first, I found it hard to not compare the two. While it could easily be said that the first was a prototype for the second, I'd consider them to be different but equalwith one exception. This game has more worlds, but the second has more stages per world. The second game made more of an effect to differentiate between stages, as each had its own self-contained story and "quest" that Spyro was undergoing as an excuse for enemy-flaming and gem-collecting. Here, only a couple levels, such as one where you have to free fairies from cages in order for them to boost Spyro to higher regions of the stage, could be said to have any objective other than rescuing dragons and collecting stuff. On the other hand, it is less tedious to advance from one world to the next in this game. In order for a balloonist to take you from one world to the next, you must have enough gems, rescued enough dragons or recovered enough dragon eggs. Often, the instant I'd stepped on a particular world, I'd already met the quota to advance to the next, making it easy for players of all skill levels to make good progress. With the second game, I remember doing annoying mini-games over and over again because I had to complete a hell of a lot of them in order to confront the final boss -- a very annoying aspect of a very good game.

That one glaring exception is centered around the boss levels. While the second game placed you in arenas with its bosses, setting up battles against aggressive foes, the original did things differently, giving you "battles" against opponents more interested in fleeing than fighting. The closest to a memorable confrontation was that against Metalhead in the fourth world, where you have to destroy (or trick it into smashing) the pylons powering its robotic frame in a pair of rooms in order to cause it to break down. But for the most part, these were anticlimactic affairs where you'll have to overcome a few obstacles, flame the boss once, watch it flee and resume the chase until it's defeated -- culminating in an endgame confrontation with Gnasty Gnorc that almost single-handedly convinced me to drop a star off my score.

While you technically do have to flame Gnorc a couple times to defeat him, you're really fighting his level instead of him. First, you have to chase down a thief to nab a key that opens a door leading to another thief chase, resulting in you obtaining a second key. This one allows you to access Gnorc's location, causing him to run away and forcing you to chase him down a complicated course where any mistake likely will lead to Spyro drowning. Flame him once and he runs down a path littered with platforms that recede into the wall until he runs out of real estate and you can deliver the final hit to beat the game. Making matters worse, there are no dragons to rescue during any of this, which means you'll have no checkpoints and have to start from the beginning after any and every fatal mistake. The occasional fleeing boss is an interesting change of pace. When a game is based around fleeing bosses with the final one being the worst offender, it makes me wish the developers had contemplated a couple new tricks.

Take that annoyance out of the equation and I'd consider Spyro the Dragon to be about as much fun as the dragon's second game. The levels might not each have their own self-contained plot, but they were still fun to advance through and weren't littered by oft-annoying mini-games that were mostly mandatory if you wanted to advance to the final challenge. While some aspects of this game, particularly the camera, might not have aged all that well, I still had a lot of fun playing through this game, even if it took me 20 or so years after initially sampling it to get to this point!

If you enjoyed this Spyro the Dragon review, you're encouraged to discuss it with the author and with other members of the site's community. If you don't already have an HonestGamers account, you can sign up for one in a snap. Thank you for reading!

© 1998-2021 HonestGamers
None of the material contained within this site may be reproduced in any conceivable fashion without permission from the author(s) of said material. This site is not sponsored or endorsed by Nintendo, Sega, Sony, Microsoft, or any other such party. Spyro the Dragon is a registered trademark of its copyright holder. This site makes no claim to Spyro the Dragon, its characters, screenshots, artwork, music, or any intellectual property contained within. Opinions expressed on this site do not necessarily represent the opinion of site staff or sponsors. Staff and freelance reviews are typically written based on time spent with a retail review copy or review key for the game that is provided by its publisher.