Your feet hit the ground with a dull thud that echoes off the granite walls. You spring back to your feet and dash down the tunnel, leaning forward to shoulder the weight of the device on your back. Ahead, the tunnel widens into a large cavern, clearly artificial in origin. On the far side, across a deep chasm, piles of gold and gems shine in the low light. You keep running. You can hear them behind you.

If you didn't guess from the release date hidden somewhere up there in the sites game page, Jetpack's pixelated 16-colour graphics are a clear indication that this game is quite old. If this puts you off, stop reading this review right now. In fact, if this puts you off, go find a sharp object and...

...what? I can't goad graphics whores into maiming themselves? Well that's no fun.

If I had regular readers (or even wrote regularly rather than in little bubbles every few years) then they would know I am not a stickler for visual things. Quite the opposite. While pretty graphics add much to a gaming experience, they are nothing more than icing on the digital cake. Scrape off all the icing and you still can still have a slice of a delicious desert. So, yes, I declare that Jetpack is a classic, a game from the Olden Days of gaming. It's so old it even runs under DOS (or DOSBox, for the clever retrogamer). 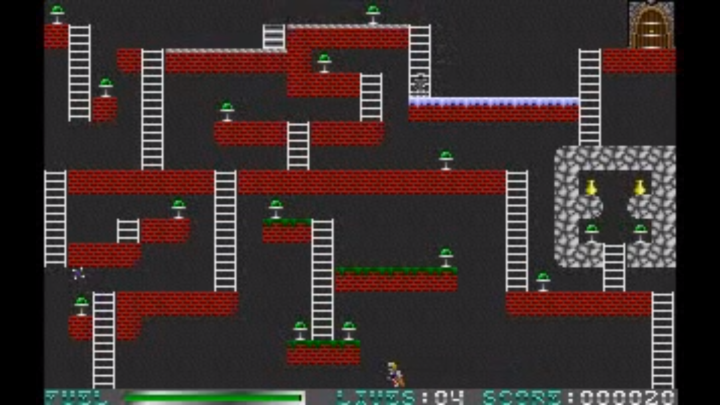 Against every instinct you hurl yourself over the edge of the cliff face, and wait for the first moment of weightlessness. You thumb the controller in your left hand, igniting your trusty jetpack and carrying you across the void to the other side of the chasm. You land, and, safe for the moment, you begin looting.

Jetpack thrusts you into the role of a nameless adventurer who must navigate one hundred deadly caverns armed only with his wits, his jetpack, and something called a phase-shifter.

Your ultimate goal? Evade certain doom and amass riches to build up your score. Golden coins, urns, and statues bearing an odd resemblance to your heroic alter-ego litter each cavern, but your real goal are the gems.

Here, though, is what you really came for; a beautiful emerald gem, positioned upon a pedestal of polished silver. You add it to your collection, and a distant rumbling tells you that this is the last one.

Only when all of the emerald gems have been collected do the massive double-doors to the next room open. This may sound easy, but it's often not.

Behind you, you hear the grind of metallic treads on rock. The Trackerbot that was following you races down the tunnel, but stops just short of flinging itself into the void. It seems to glare at you menacingly with its single red eye. 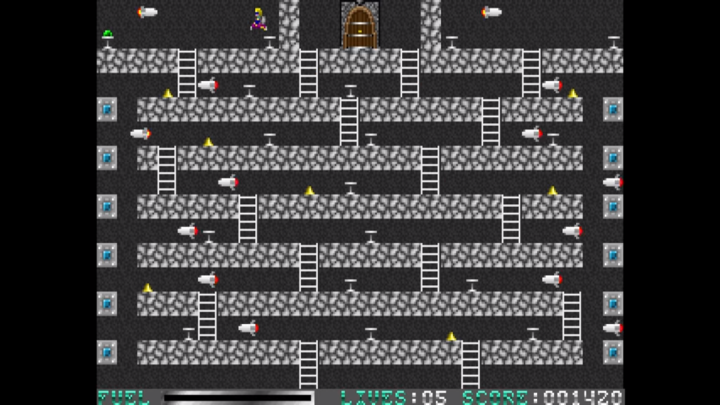 Death awaits you at every turn, usually in the form of mechanical monstrosities that somehow found themselves in these caves with you; Trackerbots tirelessly follow you along the ground; giant Steel Balls roll along the floors and drop from outcroppings; threatening to crush you into a pulp; Batbots seek you out using radar and charge you on flapping metallic wings; Seekers move slowly, but they follow you relentlessly, even passing through solid matter to do so; Springs bounce up and down off spots on the floors and ceilings like...bouncing...sentries of...doom...or something.

Luckily, your trusty jetpack gives you an edge over these baddies, affording you a full...well...four degrees of movement. Hush. It's a 2D game, what do you expect? But you must use the device sparingly, as it consumes fuel and can eventually run out. Fortunately, half- or full-tank fuel powerups can be found in the caves to top off your reserves. If you're lucky, you might even find a collection of fuel-regenerating wall tiles that can be used to refill your tank indefinitely.

But sometimes, even a personal rocket propulsion system isn't enough to get you out of tight spots. Luckily, you have another tool at your disposal; the Phase-Shifter.

With the tunnel behind you blocked by the 'bot, you start searching for another way out. Your gaze drifts up towards the ceiling. It's of a different material than the granite floors. Perhaps... 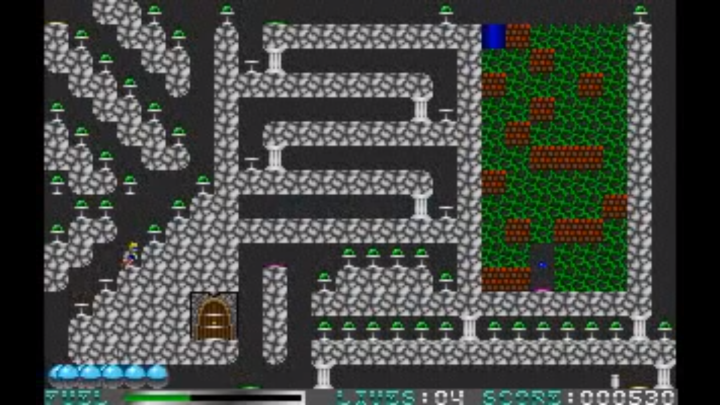 You fire your jetpack again, carrying you up to the top of the cavern, and reach for the phase emitter control hanging from your right. As your fuel reserves drain steadily, you quickly aim the emitter and depress the trigger, sending sparks flying as the familiar blue beam dances across the rockface.

The phase-shifter allows you to drill through most walls, floors and ceilings, allowing you to circumvent obstacles that would otherwise be in your path. It takes anywhere from one to six seconds to work depending on what you're using it on, which may not sounds like a lot but it's more than enough time for a Trackerbot to sneak up behind you and blast you in the arse.

Once you've broken through a tile (yeah, the shifter only works on one tile at a time), you have about four seconds to move through before it regenerates - and if you're still there when it does, it's game over. The crafty adventurer, though, will use this to set traps and imprison otherwise harmful enemies inside cocoons of rock, where they will bother you no more.

At last the shifter breaks through, and you soar upward through the hole in the rock. The exit is in sight. You can see the light streaming in through the doorway. A squadron of Batbots move upward to attack you from below. You thumb the throttle to escape, racing towards the doorway as the winged machines draw closer.

A red light blinks. You curse.

Your fuel tanks empty, the jetpack sputters and gives out. You plummet briefly for a few seconds before the 'bots catch you and rip you to bloody shreds. 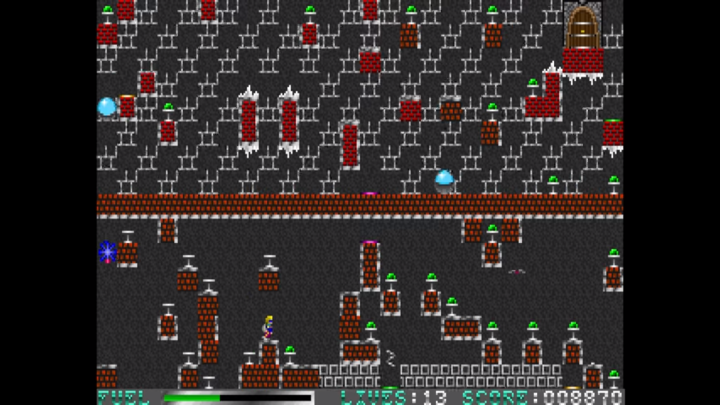 Most of the levels are quite challenging, and require quick reflexes and fast thinking to survive. Myself, I currently can't make it past twelve on this run through. I think I once made it all the way to twenty-three.

Jetpack's premise might raise an eyebrow or two from the overly-critical. Treasure hunting, with jetpacks and robots, eh? No actual story, you say? But here's the thing; Jetpack was programmed by a single person, back when games were things to casually play in a few minutes while your boss isn't looking. It does not concern itself with compelling characters, breathtaking cinematics, realistic physics or flashy graphics (because even by 1993's standards, Jetpack is hardly top-of-the-line). Its sole concern is providing the player with hours of enjoyment and frustration - the good kind, mind you, not the kind where you snap your keyboard in two because of game-ruining bugs. The word of the day in this era was "simplicity", and I suspect a lot of gamers and a lot of developers have become too wrapped-up in things that are, quite frankly, luxuries.

Games today put a lot of emphasis on things like graphics engines, and not nearly enough on the game itself, resulting in lots of pretty games with either no depth or ridiculous bugs. But Jetpack is a reminder of the way things used to be, a relic of an earlier, of a different age.

Jetpack today is freeware, and I heartily recommend this to anyone. If you find yourself distressed by the skewed priorities of games today, go download it. If you want a bit of nostalgia, or long for the days of DOS gaming, go download it. If you're a graphics whore who needs to be shown that gameplay is more important than normal-mapping and bloom effect, I will give you a copy.

If you enjoyed this Jetpack review, you're encouraged to discuss it with the author and with other members of the site's community. If you don't already have an HonestGamers account, you can sign up for one in a snap. Thank you for reading!

© 1998 - 2022 HonestGamers
None of the material contained within this site may be reproduced in any conceivable fashion without permission from the author(s) of said material. This site is not sponsored or endorsed by Nintendo, Sega, Sony, Microsoft, or any other such party. Jetpack is a registered trademark of its copyright holder. This site makes no claim to Jetpack, its characters, screenshots, artwork, music, or any intellectual property contained within. Opinions expressed on this site do not necessarily represent the opinion of site staff or sponsors. Staff and freelance reviews are typically written based on time spent with a retail review copy or review key for the game that is provided by its publisher.