Gamers who play video games for long enough eventually live to see the classics of their youth become the relics of yesteryear. Too many old favorites falter in the face of the medium's technological advancements, becoming almost painful to experience a mere generation or two later. Perhaps the worst part of seeing that process unfold is knowing there once was something special there, but time has erased much of its value and the game can never again have the appeal it once possessed. Fortunately, some titles avoid this tragic fate. Moon Patrol is one of them.

When I first started playing games, before I even heard of the NES, my options were limited to a bundle of discs available at the local elementary school. A former student's parent had copied large chunks of his Apple IIe games library and sent the duplicates in with his son, so that friends could enjoy playing them at recess. When the family moved, the discs remained and eventually served as the spark that ignited my lifelong interest in the medium. One of my obsessions at the time, alongside the likes of Mario Bros. and Bug Attack and perhaps a dozen other favorites, was Moon Patrol. 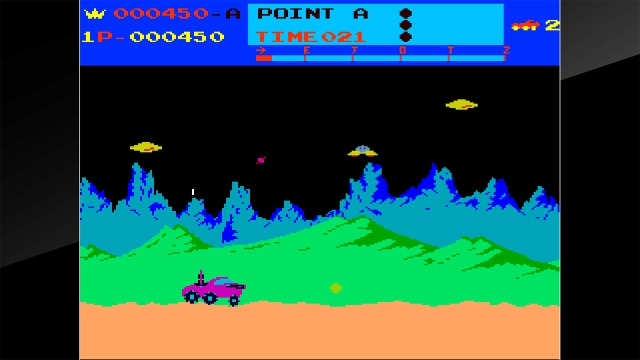 Developed by Irem, Moon Patrol is a horizontal shooter that places players in a buggy as it explores the surface of (one assumes) the moon. It will encounter alien spacecraft, deep craters, dangerous bushes of various types, explosive charges and more, as it proceeds along one of two unique courses. There's nothing more to the concept, but it worked beautifully in 1988 or so (when I first encountered the title). Thirty years later, thanks to Arcade Archives: Moon Patrol on Nintendo Switch, I found the design still holds up beautifully.

The game's campaign begins by presenting the player with a standard course. As you roll from left to right, you're occasionally attacked by a few lazy saucers that drift through the air overhead and drop explosive charges. You can blast vessels and bullets out of the sky with your own shots, which fire simultaneously along the X and Y axis. You also can move at three speeds, which alter the length of your hops. Faster speeds make it more difficult to blast obstacles out of your way before ramming into them, though, which is fatal. You have to strike a careful balance.

As the campaign progresses, the alien presence becomes more persistent. The number of saucers increases, so you must eliminate them quickly or you increase the odds of running into a shower of bullets you can't evade. Some craft also drop shots to the ground that produce new craters you must then hop, which decreases your maneuverability at a potentially vital moment. And of course, there are shrubs all over the place. You can't afford to leap into the air to avoid a bomb or a pit, only to crash headlong into fatal foliage. 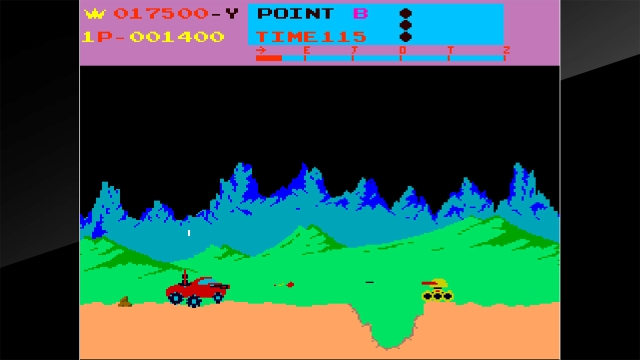 The developers carefully blended these hazards and others into a collection of challenges that steadily grow more challenging as you progress through that first course. You'll have to spring between glowing sticks of dynamite that litter the trail in one set of stages, and blast bullets fired by turrets in another. Elsewhere, boulders roll down a hill and you must obliterate them before they reach you, or jump over them and hope you land in time to shoot whatever comes next before it collides with your fender.

Progression is about more than mere survival, though. Stages are assigned letters, and none of them last for very long. So you're usually able to move forward pretty quickly, but there's a timer ticking away the seconds. Every few stages, you come across a checkpoint that awards you more points if you beat the default record (usually 80 or 100 seconds), and your score climbs pleasingly if you've managed a near-perfect run. This offers motivation to overcome familiar hazards more gracefully and efficiently, and provides ample reason to replay familiar stretches.

Then you reach the end of the beginner course and are presented with the champion course, which introduces a few new hazards I won't spoil here, along with still more devious placement of threats you already know well. Each stage is carefully designed to test you in new ways, and some of them demand nearly perfect timing. You never fall back far, though, as long as you're willing to continue, so frustration was kept to a minimum even during an era (and on a format) that lived to gobble quarters. In that respect, Moon Patrol was quite remarkable. 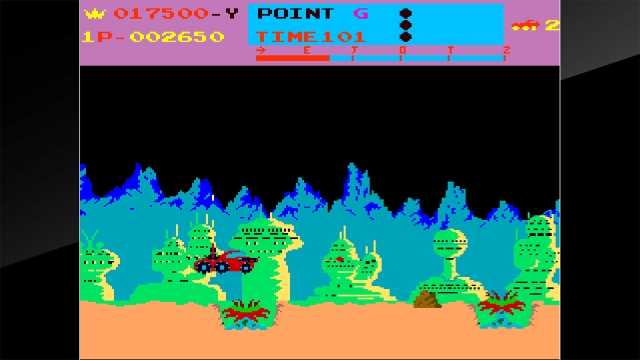 Arcade Archives: Moon Patrol manages to preserve the game and its qualities quite well. It's not the Apple Iie version I spent so many hours playing as a child, but that old port was surprisingly faithful to the arcade classic. Put aside some visual differences (particularly in terms of color palette and background artwork) and the games are sufficiently close to identical for my tastes. There also are some enhancements, standard to the Arcade Archives lineup, that serve this particular port quite nicely.

As usual, Hamster's design includes two modes in addition to the arcade default. "Caravan" lets players loose for five minutes, during which time they need to acquire as many points as they can without losing all their lives. "Hi-Score" is the same, except it eliminates the 5-minute time limit. You can keep going until you have to continue. Both modes must be attempted on default settings, and you have to start over if you pause the game. That setup may seem unnecessarily strict, but it ensures anyone who places on the leaderboards is subject to the same requirements. Chasing top scores is a more enticing prospect, as a result.

Thanks to sharp design that avoids unnecessary frustration and slowly increases the difficulty to keep players engaged, Moon Patrol remains a special experience from a special era. It is fun to revisit even today, unlike far too many of its contemporaries, and Arcade Archives: Moon Patrol is a fitting celebration of the underlying genius at work. Whether you've never touched Irem's classic or you spent hours enjoying it back in the day, this new digital release is a compelling addition to your library of classics. Play it today and see what the fuss was all about.

If you enjoyed this Arcade Archives: Moon Patrol review, you're encouraged to discuss it with the author and with other members of the site's community. If you don't already have an HonestGamers account, you can sign up for one in a snap. Thank you for reading!

© 1998-2021 HonestGamers
None of the material contained within this site may be reproduced in any conceivable fashion without permission from the author(s) of said material. This site is not sponsored or endorsed by Nintendo, Sega, Sony, Microsoft, or any other such party. Arcade Archives: Moon Patrol is a registered trademark of its copyright holder. This site makes no claim to Arcade Archives: Moon Patrol, its characters, screenshots, artwork, music, or any intellectual property contained within. Opinions expressed on this site do not necessarily represent the opinion of site staff or sponsors. Staff and freelance reviews are typically written based on time spent with a retail review copy or review key for the game that is provided by its publisher.