Before you read another word past this first sentence, take a moment to consider why you play mahjong video games (or why you might consider trying one now). Yes, I'm assuming you actually are interested in such things. If you aren't, you'd have no real reason to play Enchanting Mahjong Match. So anyway, have you decided why you play them?

Me, I play mahjong games to relax a bit. I enjoy finding matches and slowly clearing away a board. It's a great form of stress relief, almost therapeutic. I don't have to tax myself too much, but I can feel the tension melting away and suddenly I'm renewed and ready to go climb a mountain or something similarly ambitious. I didn't have a mahjong game on my shiny new Nintendo Switch, though, so when I saw Enchanting Mahjong Match offered for only $4.99 on the eShop, I decided it would be good for me. 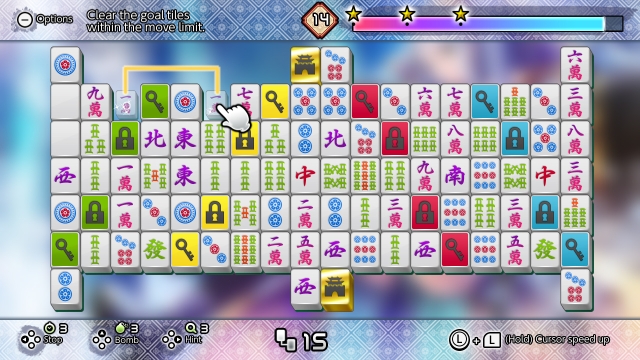 Enchanting Mahjong Match is not a conventional mahjong game. The idea is that you must clear special puzzle patterns by making tile matches that meet certain criteria. Between two pieces you select, there can be no more than three twists of the invisible connecting line. This restriction forces you to clear pieces in a particular order, since the match you want to make might be blocked by one you haven't even considered, which might in turn be blocked by another you've not yet noticed. There also are blocks positioned around many boards, to prevent you from having too easy a time finding those elusive matches. Sometimes, there also are further considerations, such as a long row of blocks you can only eliminate by matching two key tiles of the same color, which are typically surrounded by obstacles.

When you begin the typical round, a timer bar starts draining at an alarming rate. This produces a sense of urgency. I didn't mind it at first. Then I realized that the timer is virtually never sufficient to allow an experience that is even remotely relaxed. As a stage begins, you have to immediately scan the whole area, find matches and begin making them. As you're making those matches, you have to be on the lookout for additional matches. Each split-second you spend without spotting a match can wreak havoc on your chances of finishing with a three-star rank, or even finishing at all. 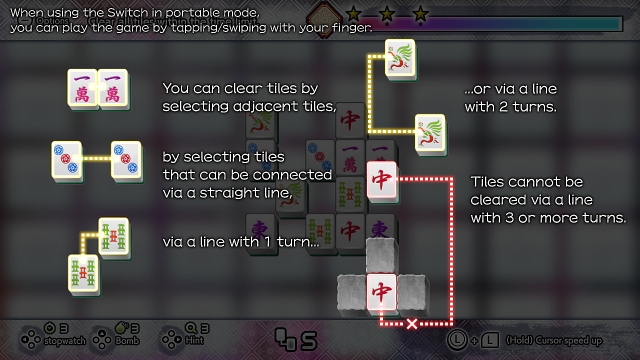 Since pieces are distributed randomly to fit a stage's designed pattern, sometimes you have a lot of options right from the beginning. I call these situations "a good start," because the sooner you can eliminate a few quick tile pairs, the fewer of them you have to scan and the greater your chances of spotting subsequent pairings. In my experience, you have around a 30 percent chance of getting a really great start that gives you a good shot at quickly making progress and from there perhaps having a decent time. Otherwise, you're in for a battle of micro-seconds the whole way through.

Part of the problem is that matches are often difficult to spot. They typically force you to look at opposite ends of a sometimes crowded field, to find matches that don't even seem like they should be possible. But they are possible. And you can spend precious seconds finding the last available match on a board, partway through a round, then clear it and the pieces reshuffle because as busy as everything was, there really only ever was the one possibility. The game is fiendishly good at eating up your limited seconds remaining. 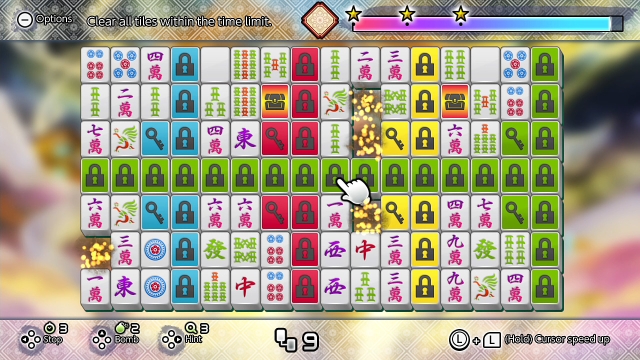 You may have power-ups available to counter this issue. One gives you a "hint" by highlighting the next pair you should match. One clears a few tiles on your behalf. The last one delays the timer by around 4 or 5 ticks. When you use a power-up, it's gone. You can accrue a supply of three of each type. They don't replenish at the start of a stage, or if your attempt at a stage ultimately fails. Instead, you have to replay stages and occasionally, you will see glowing tiles you can match to obtain one of the power-ups. In the later stages, these special tiles do not seem to appear nearly as often, or even at all, so you have to go back through and play boards you've already cleared. I don't like that.

I also don't like any of the available control options. Usually, I like to play Switch games using the Pro Controller, which allows familiar precision. Here, the analog stick jerks the cursor around quickly and slides it right over a tile I want to select. Since haste is required, this sometimes means I waste time trying to make a match I know won't work. Then I have to select the first piece and second piece with more care, and by then I've wasted time I can't afford. It's the same if I play with the JoyCons attached to the screen. If I instead tap at the touchscreen to make matches with my finger, extreme precision is required and my hand gets in the way of matches I need to be watching for. The best option I found is to use the Switch in handheld mode with JoyCons attached. This is because using the analog stick to make matches causes a brief bump to your time remaining whenever you make a match. In a sense, you're penalized for using touchscreen controls, which offer no similar boost. I literally couldn't complete some puzzles without relying on that boost, because the timer normally drains so very quickly. 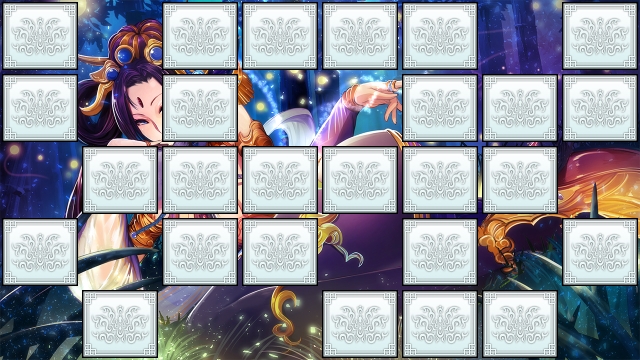 There are some boards that give you unlimited time to clear them. They are purer puzzles, where you instead are limited to a particular number of matches. I liked those stages more at first, but they also became tedious over time as the boards grew larger and larger and added new restrictions. I could typically pass them on the first attempt, but they didn't really entertain me.

Another problem is that the game is about unlocking artwork. To completely unlock a given piece, you must earn 15/15 stars across the associated 5 stages. In turn, those illustrations are presented in groups of 7 at a time, which works out to 105 stars per batch. To proceed from one grouping to another, out of a total of 4, you have to earn almost every available star. Otherwise, you're stuck until you manage better performances. Since the timer is so demanding from the very first stages, I have to imagine this setup will prevent many players from ever even being able to attempt most of the later challenges. Which is just as well, because they're maddeningly difficult.

There's nothing about Enchanting Mahjong Match that is relaxing. It demands too much of the player and offers little reward for perseverence. And yet, with a host of changes ranging from minor to major, the game might have a chance of living up to its name. As things stand, it's a frustrating experience that feels more like a tedious slog than the promised enchanting diversion.

If you enjoyed this Enchanting Mahjong Match review, you're encouraged to discuss it with the author and with other members of the site's community. If you don't already have an HonestGamers account, you can sign up for one in a snap. Thank you for reading!

© 1998-2022 HonestGamers
None of the material contained within this site may be reproduced in any conceivable fashion without permission from the author(s) of said material. This site is not sponsored or endorsed by Nintendo, Sega, Sony, Microsoft, or any other such party. Enchanting Mahjong Match is a registered trademark of its copyright holder. This site makes no claim to Enchanting Mahjong Match, its characters, screenshots, artwork, music, or any intellectual property contained within. Opinions expressed on this site do not necessarily represent the opinion of site staff or sponsors. Staff and freelance reviews are typically written based on time spent with a retail review copy or review key for the game that is provided by its publisher.