For its generation, Star Trek popularized an entire genre, and is widely considered one of the most influential television programs in history. Its look and feel is so deeply ingrained in the public unconscious it has become iconic.

These are the voyages of the starship Enterprise.

It's that iconic look and feel that Star Trek: 25th Anniversary so perfectly captures. From vibrant character sprites and sets, to digitized samples of Star Trek's signature score, to the equally iconic sound effects and surprisingly well-written script. Character dialogue, voiced by none other than William Shatner, DeForest Kelley, Leonard Neemoy and their colleagues, sounds as though it's lifted right from the screen; Spock and McCoy trade verbal jabs, while their charismatic captain remarks in his...unmistakable pattern of speech. Mediocre lines by lesser "voice actors" only highlight the stellar performances of the old cast. 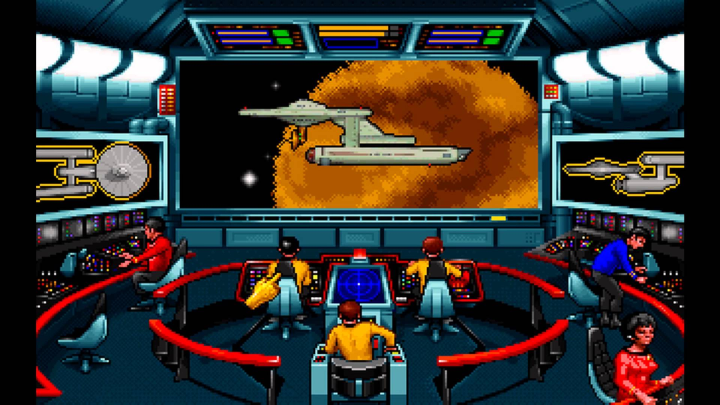 Taking the role of Captain Kirk, your job is to lead away-missions to exotic alien planets and explore them in point-and-click adventure style, solving both inventory- and dialogue-based puzzles in order to progress. Gathering the information or items you need to do so requires the use of your crewmen; Spock, as the science officer, is adept at technical solutions, and his tricorder reveals volumes of helpful data and tangential fluff. Ship's physician Dr. McCoy possesses a wealth of medical and biological knowledge, and can of course treat characters with illnesses or injuries. Rounding out your party each mission is one of Star Trek's famous "Redshirts", young Security officers whose job on the television series was seemingly to die every week. Should something threaten the lives of your three main characters, your Redshirt will sacrifice himself to keep them safe, affording the player both a margin for error and added Trek authenticity. Most puzzles can be solved in multiple ways, each logical and straightforward enough that no solution is too obscure to be found, while at the same time challenging enough to bring a sense of accomplishment when the obstacle is overcome.

In one instance, your away party finds itself threatened by a creature apparently made of electrical energy. Phasers are useless, as is your Redshirt, but as the smell of roasted flesh fades Spock notes that the smooth cavern floor has a high iron content. With a phaser set to kill, you must melt a section of the floor and immerse a nearby wooden beam in the molten iron. It hardens quickly, and when thrown traps it inside the bar long enough for the party to escape.

In between away missions, you command the mighty USS Enterprise, flagship of the Federation. Though this usually amounts to consulting the ship's colossal databanks and negotiating with hostile aliens, should the safety of the Enterprise ever be threatened you may have to employ "gunboat diplomacy", trading phaser blasts and photon torpedoes amidst Scotty's colourful protests ("She cannae take it, cap'n!"). Admittedly the controls here are a little clunky; lack of a lead indicator makes it difficult to connect shots at range, and the mighty Enterprise is slow to respond to your commands. But this shouldn't bother true trekkies. The Enterprise is a ship of exploration, not war, Jim, so naturally it wouldn't be designed with combat in mind. Likewise, combat is far from the focus of the game, it's just what happens when you piss off the Klingons. 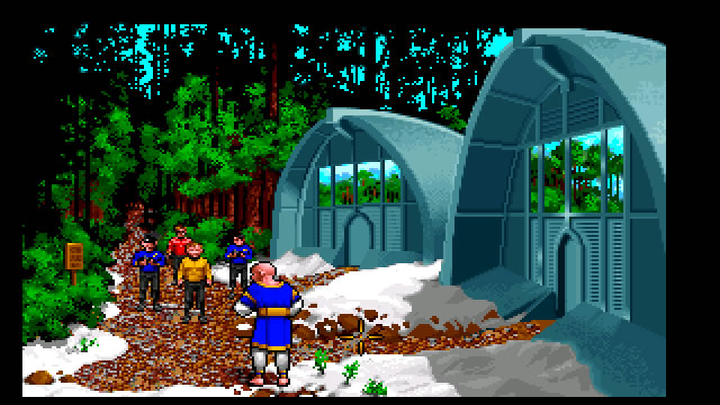 To seek out new life, and new civilizations.

Each of the game's seven "episodes" drops you into a different and interesting locale with a number of minor mysteries to solve. A Klingon criminal who claims to be the Quetzalcoatl of Aztec myth, an abandoned starship built by a race long dead and forgotten, and a Federation colony seemingly plagued by "demons" are all curiosities worth investigating, and it's up to you to discover the answers behind each question.

Here is presented Gene Roddenbery's rich vision of the future as clearly and eloquently as the Great Bird ever did himself. Whether you're a longtime fan of Star Trek or just the point-and-click genre, Star Trek: 25th Anniversary is a sublime treat sure to capture the imagination and keep you playing right till the end.

To boldly go where no man has gone before!

If you enjoyed this Star Trek 25th Anniversary review, you're encouraged to discuss it with the author and with other members of the site's community. If you don't already have an HonestGamers account, you can sign up for one in a snap. Thank you for reading!

© 1998 - 2022 HonestGamers
None of the material contained within this site may be reproduced in any conceivable fashion without permission from the author(s) of said material. This site is not sponsored or endorsed by Nintendo, Sega, Sony, Microsoft, or any other such party. Star Trek 25th Anniversary is a registered trademark of its copyright holder. This site makes no claim to Star Trek 25th Anniversary, its characters, screenshots, artwork, music, or any intellectual property contained within. Opinions expressed on this site do not necessarily represent the opinion of site staff or sponsors. Staff and freelance reviews are typically written based on time spent with a retail review copy or review key for the game that is provided by its publisher.