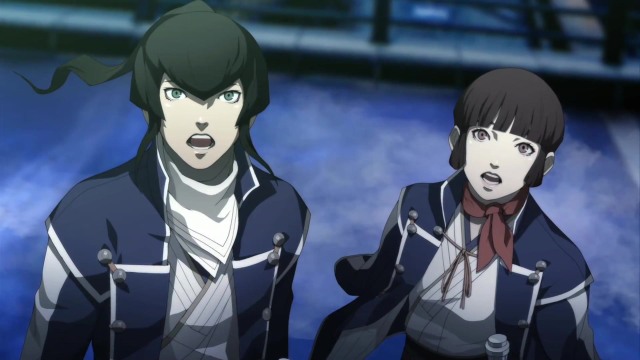 The Shin Megami Tensei series and I have a checkered relationship. In short, I look at their general premises and their promises of challenging play and feel I should love them. Then I start and find it's a struggle to find most of that envisioned enjoyment. In some cases, it's easy to explain why. When I played Persona 3, I found the focus on controlling a high school kid and influencing his relations with fellow students came at the expense of the fantastic beasts grabbed from various religions and legends, as well as the whole "end of the world" threat that's integral to SMT games. Explaining my apathy towards Shin Megami Tensei IV for the Nintendo 3DS is a much trickier proposition.

On the surface, it's just what I wanted. You control an apprentice samurai for the kingdom of Mikado who, along with three cohorts, is given various quests to eliminate unsavory monsters from the surrounding lands, including a deep system of caverns under the city. During one trip to those caverns, your group finds and defeats a powerful Minotaur, granting them access to the ruined lands of Tokyo, which are home to an entirely new faction of people. Your supervisors tell you to continue exploring, you spend a fair amount of time doing your best impersonation of chess pieces getting moved around the board by unknown masters and eventually wind up being integral to the eventual fates of Mikado and Tokyo.

Those teammates foreshadow the choices you'll eventually have to make, as each represents one path you might take. Walter, who came from humble birth, epitomizes the Chaos path, which believes that the only important thing is a person's individual strength. Survival of the fittest and all that. Jonathan, on the other hand, represents Law -- espousing the virtue of maintaining the status quo while diligently shutting out any little voices saying that some form of change might be desirable. Isabeau winds up being the Neutral choice, often agreeing with one of the others, but willing to find her own way when the crap really starts hitting the fan and both sides start becoming really inflexible in their ideals.

While those three spend a lot of time with your guy, they won't provide all that much help in battles, as only one will act at the end of each turn. To be successful against the game's numerous demons, you'll have to recruit them to your side by conversing with them in battle, leading to a series of bribes and question-answering that will either get you a new ally or an angrier opponent. Collect enough demons and you can start combining them into more powerful allies possessing their own spells and battle skills, as well as the best ones held by its "parents". Meanwhile, as you progress through the plot, you'll get to answer plenty of questions designed to steer you towards Law, Chaos or Neutral, eventually determining whose side you'll be on for the endgame.

It's a large game with a lot of tough bosses. Due to its style of combat where critical hits give your party more attacks per turn and failures take them away, run-of-the-mill enemies can be equally deadly if you don't know what attacks they're weak to and which ones they resist. There are tons of side quests and optional foes to challenge yourself with and, man, let's stop stalling and just get this out of the way. I bought my 3DS in late 2013, purchased this game with it and immediately started playing. I just finished it in February 2018. During those four-plus years, I never put it down for an extended period of time, making sure to work with it for at least an hour or so each month. I played through and beat countless games while muddling through SMT IV, but never really felt the desire to focus on it, causing a 90-hour experience to take over four years.

While I can appreciate this game on many levels, it never captured my imagination. It was too good to abandon as a waste of money, but still was an albatross around my neck, always sitting in my 3DS and taunting me with its unfinished presence.

At the onset, SMT IV moves slowly. The caverns of Naraku aren't the most exciting vacation destination and the demons you can recruit there tend to be really weak and possessing of scant few useful skills, making the eventual battle with the Minotaur extremely tough. When you get to Tokyo, you'll have a number of varied locales to explore, which is cool. However, nothing you find really comes close to the dungeons Atlus had devised in past entries in the core SMT series, which featured massive mazes loaded with all sorts of fiendish tricks such as pits and blacked-out sections. Here, most of the locations you'll see are designed to look like regular towns and buildings -- a nice touch for proponents of realism, but not necessarily exciting to navigate. I mean, one fairly important dungeon from a plot perspective takes place in a tower where you simply scale a series of stairs, occasionally entering a room on one tiny floor or another. It was less a dungeon than a linear corridor occasionally broken up by battles.

And those battles could get annoying. Much like in recent Persona games, enemies are represented by on-screen characters that charge you when you get within range. If you can hit them with your sword, you'll cause a small amount of damage and be guaranteed to act first in the ensuing fight, but if they collide with you, there's a decent chance they'll get the first strike. And waiting to attack can be deadly. For whatever reason, the game designers decided defense was not an integral stat in SMT IV. Purchasing new armor simply gives you small health boosts while often improving your resistance to some elements and weakening you against others, while your level-up bonuses affect your melee and gun attacks, magical proficiency, ability to dodge attacks and frequency of unleashing critical hits.

This turns battles into fast-moving, hard-hitting affairs where you're endeavoring to wipe out enemies before they can unleash their own attacks. Bosses are fiendishly difficult because they often strike first in battle and routinely have multiple moves per turn. And then, a good way into the game, things started to change and, with only a couple exceptions, got much easier.

Part of this has to do with how handy demons can get late in the game. As long as you're diligent in attempting to recruit these beings, enduring an oft-infuriating game of constant bribery and guesswork, you'll have a good stash and be able to mix and match until virtually any attack an enemy may possess can be resisted by someone. More than once, I'd go against a boss, get killed a couple times and then search through my demons to find one capable of negating its most deadly attacks. I'd swap that one into my party and those spells and skills were now causing the boss to lose turns due to them bouncing off that demon. Suddenly, I was able to easily keep my party healed, while quickly racking up the damage on my opponent until it was dead.

There also is the handiness of the game's "App" system. For every level gained, you get 10 points to purchase applications that can gradually turn you into a juggernaut capable of regenerating health and magic with every step taken, able to quickly convince demons to join you AND hand over gifts, as well as stash more demons, allow them to use more skills and so on. By the end of the game, I was powerful enough that if bad luck didn't get me killed immediately in battle, it wasn't likely that anything else would.

This is good because death is an almost comical inconvenience in this game. Every single time your entire party perishes, you have to scroll through a lengthy conversation with Charon, as he tries to convince you to bribe him with either in-game currency or those play coins you get for walking around with your 3DS in order to send you back to the world of the living. Is that handy for times when you haven't saved in a while and got caught off guard by a tough battle? Sure. Is it sort of amusing to imagine the ferryman to the afterlife as an overworked bureaucrat? Of course. Is it annoying as hell to have to repeatedly speed through his dialogue every single time you die? No doubt.

Equally annoying was this game's treatment of the Neutral Path. For those not familiar with this series, the Neutral Path is SMT's reward for diligent players, allowing them to decide that the representatives of both Law and Chaos are jerks. Instead of picking one or the other, you simply eradicate both and give humanity the opportunity to flourish without their overbearing presences. In this game, Neutral is less a philosophy than a simple unwillingness to commit to anything. When you're asked certain questions, you can either give a Law answer or Chaos answer, but there aren't really any Neutral choices, so to luck into that path, you have to near-perfectly balance between Law and Chaos answers and, in the process, look more like an indecisive milquetoast than a noble warrior with a legitimate cause.

On the surface, SMT IV is a solid game, possessing a lengthy and challenging quest. By having the proper demons in your party, nearly any challenge can be easily overcome, making this a fun game for those who love "trial-and-error" experimentation with different characters. But it was a near-constant struggle for this one to grab my interest. It took a while for the action to really pick up; every time I died, it was annoying to have to scroll through a bunch of text in order to start anew and I got forced into allegiance with the arrogant trash espousing Law because I apparently wasn't indecisive enough to get shunted onto the Neutral Path. I found this game to be worth playing and finishing, but I wasn't able to manufacture much excitement over doing so.
3/5

If you enjoyed this Shin Megami Tensei IV review, you're encouraged to discuss it with the author and with other members of the site's community. If you don't already have an HonestGamers account, you can sign up for one in a snap. Thank you for reading!

© 1998-2021 HonestGamers
None of the material contained within this site may be reproduced in any conceivable fashion without permission from the author(s) of said material. This site is not sponsored or endorsed by Nintendo, Sega, Sony, Microsoft, or any other such party. Shin Megami Tensei IV is a registered trademark of its copyright holder. This site makes no claim to Shin Megami Tensei IV, its characters, screenshots, artwork, music, or any intellectual property contained within. Opinions expressed on this site do not necessarily represent the opinion of site staff or sponsors. Staff and freelance reviews are typically written based on time spent with a retail review copy or review key for the game that is provided by its publisher.