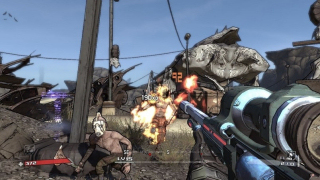 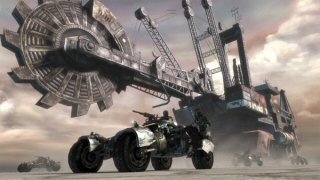 Over time, my tastes in gaming have changed so that now I could probably survive playing nothing but platformers and action-RPGS (at least until I got sick of them and employed a bit more diversity when choosing what to play). Fortunately, designers have been remarkably compliant with my preferences over the past decade or so. They must have found there's big money in making action games with RPG elements.

That means we get games such as Borderlands, a first-person shooter that's as loot-oriented as the average Diablo-styled offering. You'll spend hours shooting everything that moves, then breathlessly looking over everything falling out of cold, dead hands to see if something drops that's better than what you've been using. Gaining levels is important, not just because you can only access truly great equipment and skill tree perks when you're powerful enough to wield them, but also because the damage you take and receive in battle is based on your power compared to that of your opponents.

Borderlands takes place on the nightmarish planet of Pandora. You control one of four diverse characters, fighting bandits and beasts as you search for a mystical vault that rumors say will open only once every 200 years and bestow all sorts of fancy, futuristic weaponry upon anyone lucky enough to be around. The vault is Pandora's version of a billion-dollar lottery drawing, which explains why certain people you meet are interested in forming some sort of partnership with you (and definitely explains why one of the galaxy's largest corporations sends a highly-trained mercenary army to the planet to shoot its way through anything between them and the Vault).

It'll take a while for you to get anywhere near the famed vault. After starting at the semi-friendly town of Fyrestone, you clear out the local bandit gangs, complete quests for the few friendly locals in the area and slowly work your way to Sledge, the leader of the local rabble (who possesses one piece of the key needed to access the Vault). From there, you gradually meet more potential allies, kill more bandits and get ever closer to your goalthat is, as long as mercenaries don't beat you to it. Not only are they better armed (and armored) than the bandits, but they're smart and sane enough to come up with plans more effective than "hide in your lair until the well-armed dude who's slaughtered everyone in his way comes knocking on the door."

As in other games within the genre, accruing power is simple: you kill foes to acquire experience and loot, and to gain access to special weapon chests containing still more loot. Each area plays host to a few vending machines, where you can spend some of the money you'll collect on weapons, shields, ammo and upgrades that allow you to carry more ammo. Shields are very useful, allowing you to take more damage and automatically recharge energy when you successfully avoid enemy firepower for a few seconds, but weaponry is the main draw. There are several gun classes and, seemingly, a near-infinite number within each class. Many have specialized ammo that makes them more useful than the standard variety against shielded or heavily-armored foes.

After gaining a few early-game levels, you start putting points into your character's skill tree, which affects natural abilities as well as special attacks, often in ways that influence what weapons you'll seek to obtain. Roland, for instance, has perks improving both combat rifles and shotguns. Put points into the former and their small magazines grows larger, while you'll also benefit from diminished recoil. Work with the latter and bullet spray narrows, making eligible weapons more accurate from a distance -- something that's very handy, considering they do hit hard! The more you specialize with a particular gun class, the more bonuses you accrue of that type.

Then there's the special attack. Each character has their own. They activate for a brief period, then enter a lengthy cool-down phase that can be shortened if you assign points to the appropriate perk. Roland drops a turret that initially shoots small streams of bullets, but can be upgraded to a godly machine capable of shooting guided missiles and restoring the ammo and life of any player character near it. The massive Brick can go berserk and HULK SMASH his way through enemies, while Mordecai sends out his aggressive bird-like pet and Lilith temporarily turns invisible to really get the drop on enemies. If you're playing solo, perks are often necessary simply to survive (since you won't have a flesh-and-blood partner watching your back).

To my surprise, I was able to find someone to play the game with locally. The split screen was a bit jarring for my easily-distracted brain, but I enjoyed observing how characters can work together as a cohesive unit. Or at least, they can in theory; my friend and I have decided that when we're together, we both lose about 50 IQ points. That tends to hurt the whole "cohesive unit" aspect of play. But it could have been beautiful! Him: controlling Brick, going berserk and charging into the fray to physically maul hapless bandits. Me, as Lilith: hanging back and peppering foes with gunfire... and occasionally phase-walking up to their distracted selves to blast them with a shockwave upon turning visible again.

While going it alone is doable, it's easy to see that playing with a friend is the ideal. No single character seems well-rounded enough to dominate every obstacle. While soloing the game with Roland, it didn't take me long to realize my turret worked better in some situations than in others. Against enemies with projectile attacks, I loved how it allowed me to effectively trade shots with them without actually putting myself in harm's way. Melee-happy enemies could be more problematic, though, as I'd have to lure enemies in front of the turret so it would have something to shoot. And then there are the second-chance attacks. If you are felled by a foe, you have a limited amount of time to kill something. Doing so revives you, while failing in that endeavor sends you back to the last checkpoint and restores the health of any surviving foes in the vicinity. A human partner would potentially still be fighting where you fell, though. In that case, you could run back to the battlefield and get involved before they die, avoiding the conventional loss of progress. That sort of thing that can make a tough boss fight much easier.

Though I generally had a blast with Borderlands, the game does have its flaws. Fighting humanoid opponents is fun. There are multiple kinds of bandits, ranging from melee combatants to massive gunmen who ignore evasive tactics, figuring they'll outlast you in a scrap. When the Crimson Lance mercenaries enter the fray, though, things get more dangerous. Many of them either drop their own turrets or wield massive bullet-blocking shields. On top of that, they (as well as every enemy) have Badass varieties that are more powerful and durable. A few varieties of beast might do something genuinely interesting like spit some sort of gunk, and their Badass forms do have projectile attacks. But in general, whether it be the wolf-like Skags, the slug-like Scythids or the spider/ant hybrids known as, uh, Spiderants, your frequent encounters with enemy mobs grow old quickly.

There also are issues with the game's scaling. Early on, it offered a good challenge. The missions I received and the enemies I fought were all at my level and provided decent resistance. But as I progressed, I found that clearing every available quest allowed me to gain an advantage of a couple levels over everything. Regular enemies became easy, and boss fights were much easier to survive. The appearance of the Crimson Lance boosted the difficulty again, but I cruised through a large chunk of the game simply because I was three or four levels superior to foes, which gave a substantial boost to the damage I was causing while blunting their counterattacks.

This really becomes a problem in much of the available DLC. The available expansions mostly include reasonably sizable quest chains that, if done at the wrong time, will dramatically overpower you for the main game (regardless of whether it's your first or second trip through Pandora). When you reach the final boss during your second trip through, the game automatically enters a mode where every enemy in the game scales to your level, which helps, but it's sort of annoying to have to play through the campaign two full times in order to get the best possible DLC experience.

The largest DLC bundle is a slog, though, so I'm not sure enemy scaling would even help it. The reason is that each expansion has a grand total of one fast travel location, where you are placed upon starting your adventure or reloading a save. With most of new areas, that's cool. The fast travel location is in a hub area, connected to each outlying region. In The Secret Armory of General Knoxx, though, the world is larger. The hub area connects to two lengthy roads barred by checkpoints you must blast through in order to reach other regions. It was tiresome enough to repeatedly venture down those roads to complete side-quests, or to advance the main plot when I was able to gain an edge on the powerful foes. I don't think I would enjoy the activity in a world where everything I encountered could pose a tough challenge at any time.

Still, in spite of those complaints, I played through Borderlands twice and finished three of the DLC. Gearbox Software must have been doing a lot of stuff right to keep me engaged for all that time. I might have been occasionally annoyed, and I spent far too much time online researching the best time to delve into the added material, but I still felt engaged enough to not just tear through things with far more focus than I usually exhibit, but to to also get excited about playing the other two games in the main series. Given that experience, I must say this game earns a recommendation.

If you enjoyed this Borderlands review, you're encouraged to discuss it with the author and with other members of the site's community. If you don't already have an HonestGamers account, you can sign up for one in a snap. Thank you for reading!

© 1998-2021 HonestGamers
None of the material contained within this site may be reproduced in any conceivable fashion without permission from the author(s) of said material. This site is not sponsored or endorsed by Nintendo, Sega, Sony, Microsoft, or any other such party. Borderlands is a registered trademark of its copyright holder. This site makes no claim to Borderlands, its characters, screenshots, artwork, music, or any intellectual property contained within. Opinions expressed on this site do not necessarily represent the opinion of site staff or sponsors. Staff and freelance reviews are typically written based on time spent with a retail review copy or review key for the game that is provided by its publisher.